In plain language: We are looking for empathetic and mission focused engineers to work on sometimes ambiguous-- sometimes huge-- but always impactful work for the American people. You'll join a team of the most talented technologists from across the private sector and government committed to untangling, rewiring, and redesigning critical government services.

We work on some of the biggest issues affecting the American people including immigration, veterans, students, health care, and more.

No government experience or resume required!

Come join us in shifting government tech in the right direction! 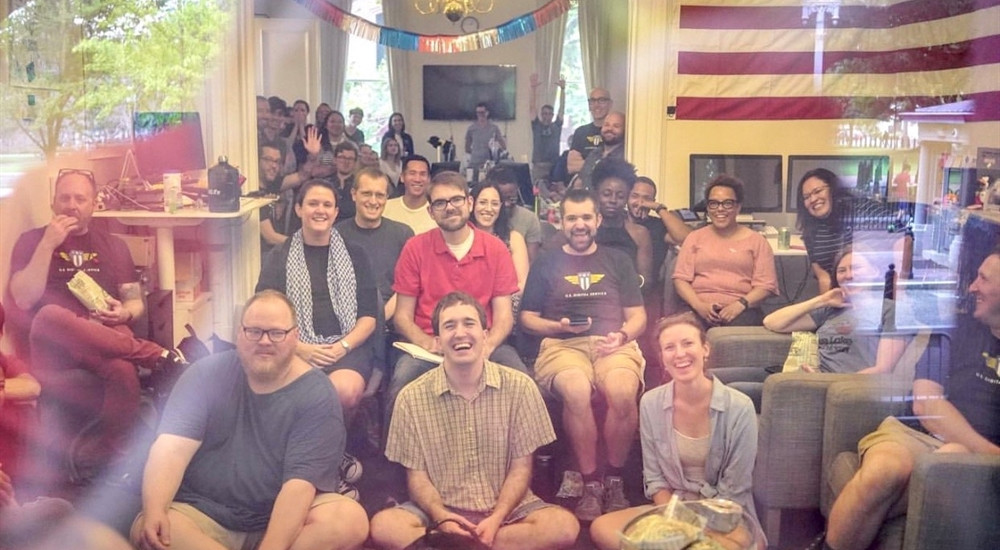 USDS is a group of technologists from diverse backgrounds working across the federal government to transform critical services for all Americans. Interacting with the government should be as easy as buying a book online. We prioritize projects to do the greatest good for the greatest number of people in the greatest need.

We offer experienced technologists the opportunity to serve tours of service (six months to four years), empowering them to bring fresh perspectives and skills to the highest levels of government. We employ modern software development best practices and user-centered design to improve the way government serves millions of people.

"I was inspired to join the U.S. Digital Service because I wanted to serve the country, and I saw an opportunity to use my technology skillsets and experiences for leveraged impact." - Tracy Chou, She/Her

"It’s not about how can we maximize digital ad space or make conversion rates better, but how we can use technology to really make a difference in someone’s life." - David Holmes, Director of Engineering, He/Him

"Improving the aging technology that government and its services run on was an extremely compelling goal." - Eileen Chen, She/Her

"Government systems and processes are, as we say, a “target-rich environment” where even small changes can make big improvements. Those improvements make it possible for government agencies to serve the public better, which is extremely rewarding." - David Methvin, He/Him

"I started at USDS in late 2014. I decided to join after sitting on the floor of the Grace Hopper Women in Computing Conference with Mikey Dickerson, then the administrator of USDS, who pitched this idea of a new tech startup inside government at the White House...I think it’s critical to have technologists in the federal government because we have government services that require consumer-facing products, and we need people in-house who know how to build them." - Kathy Pham, She/Her

"The first thing I worked on was helping to launch a digitized version of the form that allows veterans to apply for healthcare benefits, Department of Veterans Affairs Form 10-10EZ. We were building a mobile-first responsive application that was replacing a hosted PDF that only worked in Internet Explorer 8 and below and Adobe Acrobat 7.5 and below. Less than 10 percent of veterans could submit the previous version of the 10-10EZ form. By making a modern, mobile-first, responsive online application we saw an increase of almost 10x the submissions within the first three months". - Robbie Holmes, He/Him

"I was really excited this summer to have an opportunity to contribute to a lot of projects - grid modeling at the Department of Energy, better hiring at the Office of Personnel Management, better access to health data for Medicare providers at Health and Human Services, faster software for the Marines". - Annie Sullivan, She/Her

It all started with Healthcare.gov. The site launched in October 2013 and immediately encountered massive technical challenges. The Administration moved fast to recruit high-caliber engineers from the private sector to fix the website. They worked around the clock and quickly fixed the Healthcare.gov’s reliability issues. Over 8 million Americans had successfully signed up for health insurance by the end of the first open enrollment period.

Members of the Healthcare.gov rescue team went on to found the United States Digital Service to fulfill the non-partisan mission of building better government services through design and technology.

Our products engage real users before launch. We apply user-centered design and iterative development to prioritize user needs and learn what works as quickly as possible.

We don’t look like your typical government employees (hoodies and sneakers reign supreme here) and we’ve been known to attend Star Wars premieres en masse. We can see the impact our work makes on real people’s lives. In the five years since our inception, we have helped the government avoid spending more than $1 billion in taxpayer dollars.

Our leadership team is comprised of 50% women, and our staff is more than 40% female overall. We recruit technologists from all different backgrounds and communities across the country, not just Silicon Valley. Diversity is important to us because we build better products when our team represents all of America.

Read more about USDS on Medium.

Want to get notified about new jobs at United States Digital Service?

Create a company alert
Your job search status has been updated.

Are you looking for a job?

When you create a Developer Story, we’ll accelerate your matches and get you in front of employers ASAP.

Hiring developers? We have Talent Solutions.