Did any of you face the following problem when you try to overwrite the $esp pointer?

Of course trying a legit buffer size always works! But, when you try to increase the buffer size to overwrite the $esp and you manage to success to touch the first byte, second byte, or third byte of $esp it works perfectly. But, as soon as you try to overwrite the whole 4 bytes of the $esp it totally changes the content of it as well as the address. It doesn't show 41s any more as I used "A"s to fill the buffer. I've attached a screen shot maybe it will explain in more details. Thanks all. 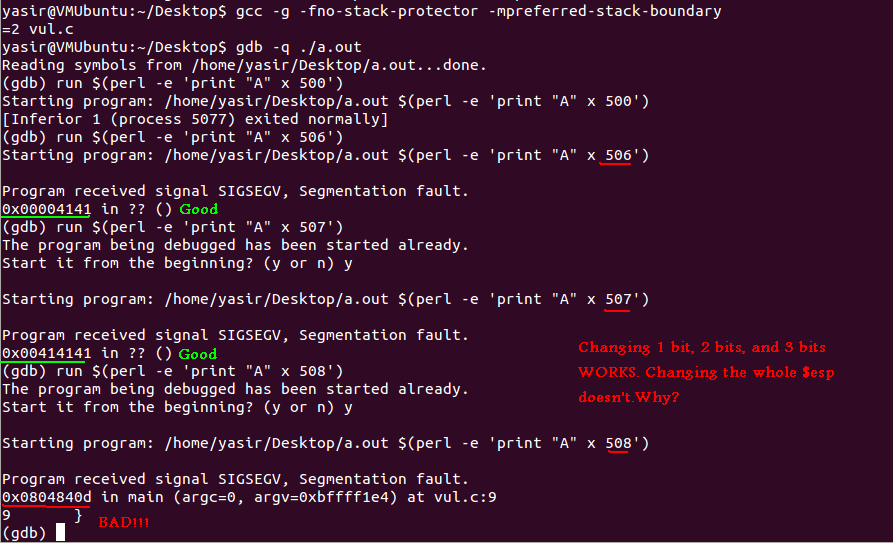 This is related to the implementation of NX emulation in the 32-bit non-PAE Ubuntu kernels, and when the CPU exception is raised. For memory regions below the NX emulation line (i.e. "within" the emulated NX area: from address 0 to the end of the program's text segment -- less than the 0x08049000 end-address of this binary in /proc/$pid/maps), the segfault is delivered after EIP has landed on the actual invalid address. For addresses above the line, the fault gets triggered through a different path that reports the failure without moving EIP forward to faulting address, staying instead on the "ret" instruction that leads to the fault.

You can see this in gdb:

You can also see the difference in how the faults are reported in dmesg output. This is the output associated with the "508" attempt:

If you boot with the PAE kernel installed, sudo apt-get install linux-image-$(uname -r)-pae, and you have a PAE capable CPU, you'll see the behavior you'd expect (since NX emulation will be disabled in favor of hardware NX), and all 4 attempts will segfault with the expected EIPs.

Not the answer you're looking for? Browse other questions tagged ubuntu x86 segmentation-fault stack or ask your own question.

8477
What and where are the stack and heap?
520
Which is faster: Stack allocation or Heap allocation
276
Stack smashing detected
698
Why is Java Vector (and Stack) class considered obsolete or deprecated?
799
How do you implement a Stack and a Queue in JavaScript?
445
How to install lxml on Ubuntu
606
How to kill a process on a port on ubuntu
537
How to install Boost on Ubuntu
567
How to install the JDK on Ubuntu Linux