We have a Windows Service which runs on 2003 Server. It opens a source Word document using the Word Interop and then does some stuff with it. It also does likewise with Excel and PowerPoint files.

Recently we've tried moving this service onto a Windows 2008 Server machine and are having real problems with it.

I get the above exceptions when the windows service is running on 2008 Server. Looking at the Task Manager, the application does load ok, but then closes again shortly after.

I've read things about Vista and Server 2008 not having a Session0 anymore, and have tried changing the Office DCOM security properties accordingly, including changing the identity of the user running them to Integrated but to no avail.

Does anyone know if this is possible at all? This is a fundamental aspect of our system and so we need to be able to do this.

I tried following the advice given by H Ogawa in this MSDN thread, and it seemed to work. It's bizarre, but kudos to Mr. Ogawa for discovering it.

Summary of the 'Ogawa Hack': create a desktop folder for the system profile, as:

and, if running on a 64-bit machine, create another one, as:

Also, the folder(s) need write permission for whatever user is "driving" Office.

[Edit 2: clarified that on 64-bit Windows, you need both folders, not just the WOW64 one]

If you are using Apache, you might also need to follow these steps to get MS Word working properly (along with everything outlined in other answers):

Below is a screenshot showing the two dialogs you'll need to bring up: 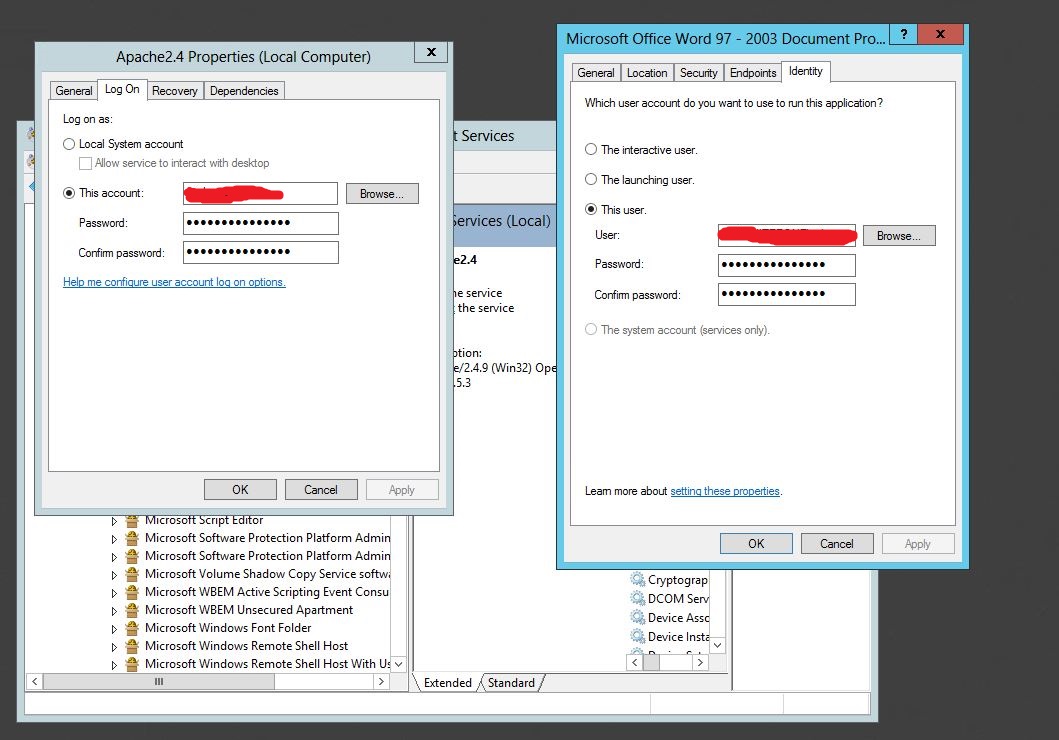 **if you can't find the MS Word, make sure you are launching the correct DCOM Config (64 bit vs 32 bit) depending on what version of Office you have installed.

There are two options here, you can set Apache to use Local System Account and check the checkbox to ALLOW desktop interaction. If you do this then you need to set the Identity for MS Word to Interactive User.

Otherwise, you need to set both to the same user (Ideally the user that is logged in) like shown in the picture.

This also happens on Vista with UAC enabled. You might want to try setting the DCOM identity to be an administrator account and test it again.

I also recently started having this problem on an XP box trying to open workbooks in Excel through interop services, but have not yet found a workaround. I myself would like any other insights the community might be able to throw out there...

Not the answer you're looking for? Browse other questions tagged windows-services windows-server-2008 ms-office dcom comexception or ask your own question.