So, I have Node.js installed and now when I tried to install Mongoosejs I got an error telling me that I don't have the needed version of Node.js (I have v0.4.11 and v0.4.12 is needed).

How can I upgrade to this version? I suppose I just could install it again with the latest version, but I don't want to do it before I'm sure that my project folders in the folder "node" won't be deleted.

For the latest stable version:

For the latest version:

just reinstall node from the .msi in Windows from the node website.

If you just need to upgrade your old version of Node.js to the latest one and don't need multiple versions, simply over-write your existing executable with the new one.

This Just Works! TM on all platforms and is the easiest/fastest method.
When you run node -v in your terminal you will see the the latest version.

If you originally installed Node.js using brew then run:

If you need to run multiple versions of Node.js on your machine e.g. if you have an older project that targets a specific version on AWS Lambda, then NVM (Node Version Manger) is your friend!

If you're curious about the installation command read the source code
... its been reviewed by several node.js security experts

Step 2 - Install the version of node.js you need

Once you've got NVM you can install a specific version of Node.js using the nvm command:

Note: you may need to close & re-open your terminal window for nvm command to be available.

You should expect to see something like this in your terminal:

You now have the latest Node.js on your machine.
And if you need to temporarily switch to a different/previous version, you can do it with a simple nvm command.

Note: avoid using sudo with Node/NPM as it violates the security principal of least privilege

NVM is considered "better" than N for managing multiple Node.js versions because the verbose commands mean is much easier to keep track of what you are doing in your Terminal/SSH Log. It is used by the team at NPM the creators/custodians of the Node.js World!

and also you can specify a desired version:

After complete the installation above, the NodeJS and NPM will be upgraded to the latest one and then you can cleanup the package as normal as:

You can always check the version with following command:

That's it folks. It used to be more complex and people used different kinds of packages and strategies to manage it. But things have changed for the better.

Just go to nodejs.org and use the latest installer.

Upgrading node.js to the latest version on Windows

NOTE: You may need to run cinst nodejs.install for chocolatey to register your existing installation. (thanks for the comment, @mikecheel)

If you have never installed node, you can use chocolatey to do that as well. Install chocolatey (see step 1 above). Then from a command prompt, type:

Installing a specific version of node on Windows with chocolatey

For Upgrading Node.js to latest version

If you need to do Undo then follow command

This method of upgrading node is now unstable and should not be used. The best way to manage Node.js versions is to use NVM: Node Version Management.!

You can read the installation steps on the nvm [GitHub page][1]. There are only two easy steps for installation and configuration. Using nvm

At any given time you can switch to another with use:

For brew users on Mac OSX

So latest version will be downloaded and installed

Specific version of node you can

Used below commands to upgrade

These work well. But for UX term terminal node -v did not show latest version so I have closed and reopened new terminal. I found v10.1.0, output of node-v after installation by sudo n latest

You can now easily switch node versions when needed.

Bonus: If you see a "tar: invalid option" error when using nvm, brew install gnu-tar and follow the instructions brew gives you to set your PATH.

will upgrade to the latest version of the node

If you are using Linux .. Just do the following steps sudo -i sudo apt install curl curl -sL https://deb.nodesource.com/setup_10.x | sudo bash - sudo apt-get install -y nodejs you should have now the latest version

You don't need to worry about an upgrading process.

You can just install the newest version using the official documentation as if you didn't have it installed and it will work like a charm. > https://nodejs.org/en/download/package-manager/ ;)

Its very simple in Windows OS.

You do not have to do any uninstallation of the old node or npm or anything else.

And then look for Downloads for Windows option and below that click on Current... Latest Feature Tab and follow automated instructions

It will download the latest node & npm for you & discarding the old one.

Open the package.json file of the node.js project and replace the version number specified with * in the dependencies will fetch you the latest version.

If you are looking in linux..

npm update will not work mostly am not sure reason but following steps will help you to resolve issue...

Now unlink current node and link with latest as following

There is good explanation for linux users how to update node version step by step. P.S type instead of sudo n stable sudo n latest for receive latest node version.

If you receive following error

You have just rebuilt npm by the following command npm rebuild it should fix the problem.

For Windows users, simply go to the node.js (nodejs.org) website and download the latest version (8.6.0 as of 09/29/2017). Follow the steps from the auto install window and you're good to go. I just did it and when I checked my latest version in webstorm, it was already there.

It worked for me in my windows machine.

just try this on your terminal :

it should do the trick.

later, run node --version to check the version that you have.

After install nvm as @nelsonic describes, this is the easiest way to keep it upgraded:

And to always use the "node" version:

Finally to upgrade your node version and keep the installed packages:

I had the same problem, I tried to reinstall and didn't worked for me.

Remove "C:\Program Files(x86)\nodejs" from your system enviorment PATH and thats it!

Just bundling node and npm updates to latest version into a single command for my ~/.bash_profile:

This assumes you've already installed "n" from Eldar Djafarov's answer. After saving this to your Bash profile, re-open the terminal and just type update-node and enter your sudo password:

Install the nvm (Node Version Manager) using the below command

To install or update nvm, one can use the install script using cURL:

check if nvm is already installed

To install or update node, run below command:

nvm install 10.14.1(the version of node one want to install)

To check the list of node version available to the system or currently running for the system, run the below command: 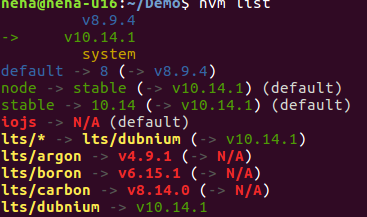 NehaNeha
14055 bronze badges
Add a comment  |
1
2 Next
Highly active question. Earn 10 reputation (not counting the association bonus) in order to answer this question. The reputation requirement helps protect this question from spam and non-answer activity.

Not the answer you're looking for? Browse other questions tagged node.js upgrade or ask your own question.

742
How do I update Node.js?
136
The engine "node" is incompatible with this module
65
How can I uninstall or upgrade my old node.js version?
67
How to upgrade node.js on Windows?
54
Cordova Error: Your ios platform does not have Api.js
17
Javascript - flatMap method over array - (flatMap is not a function)
20
Argument of type { static: boolean; } is not assignable to parameter of type { read?: any }
11
React App failed to compile after install
4
Error Installing Yeoman on ubuntu
9
iOS Firebase Flashlight/ElasticSearch Heroku Setup using Node.JS
See more linked questions