Xcode doesn't see my iOS device but iTunes does

I have a strange problem.

Xcode doesn't see my device. It says "iOS Device" not "Sauron's iPad" as usual.
(I am sure that device is connected because I see it in iTunes.) Xcode denies to start my application on device. It says:

"Xcode cannot run using selected device. No provisioned iOS devices are available with a compatible iOS version. Connect an iOS device with a recent enough version of iOS to run your application or choose an iOS simulator as the destination."

Xcode sees my other iPad with iOS 4.3.3 and can run applications on this device. I have tried to restart my Mac - without result.

Does anybody have ideas?

Even though this one does not address the specific problem of the OP, it might be a solution for other people finding this question.

Your device should now be visible again in Xcode!

Hope that helps a few people. Apparently it does!

Had the same problem , restarted xcode and it found my phone again.

I ran into this issue today where Xcode 8.2.1 suddenly decided the connected ipad (ios 10.2) was no longer connected. Unplugged, plugged back in, rebooted my macbook, and tried numerous recommendations above. The thing that fixed the issue for me was shutting down and rebooting the ipad device itself.

I get this problem once, using a not official Apple cable.

To others who might have the same issue and the answers above don't work: Make sure that the iOS version installed on your device matches the iOS SDK version you have installed on your mac. If these don't match you are unable to build to the device.

In my case I did next steps

May be my answer is helpful to new developer. Just follow these step , You can connect your iPhone/iPad with X-code. 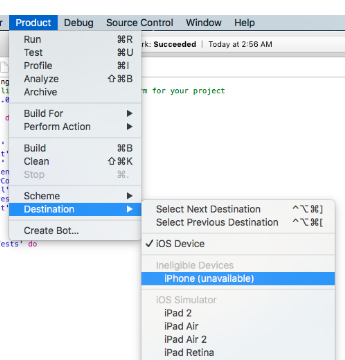 I just barely tried every solution suggested above. The only thing that worked and resolved my issue was to go into xcode's "Organizer", right click on my iPhone, click on "Remove from organizer" and then wait about 10 seconds while xcode automatically re-added the device.

I previously plugged in my phone and itunes recognized it fine and synced with it, etc, but all xcode said in the organizer was "Device is not currently connected", which it was most definitely connected if itunes was syncing with it and not syncing over wi-fi.

Why xcode needed me to delete and re-add the phone is beyond me, but it works great now that I did this.

I tried all of the above to no avail. I had been using the phone for ages and suddenly the Organizer thought "this device is currently not connected". A reset of the phone fixed it for me (hold Home & Power until the Apple logo). I did so with it still connected to the MacBook, but it shouldn't be necessary.

For Xcode 7 (and possibly above),

hit the plus sign at the bottom and select the device connected and hit next, then Use for development.

This only works if Xcode is reading your device, but you aren't able to run your app on the device.

Also make sure the device's OS version is greater than or equal to your app's Deployment Target OS version.

If none of these work, try simpling restarting your iphone or device! Works every time for me (:

My app worked on all simulators but not on my device. I tried just about all the steps from each comment and didn't have any luck. I went to my device settings and switched my "Personal Hotspot" from off to on. Then it was all good!

Have you tried to delete and re install the device in your Apple Developer portal? If yes, try to upgrade your xcode to 4.3.2, I remember that I needed to update to xCode 4.3.2 after updating my iPhone to iOS 5.1

After updating my iPhone to 10.3.3, Xcode 8.3.3 cannot find it in the Device window but iTunes can. Restarting Xcode fixed the problem.

After 20 minutes of debugging, I realized I had to hover over the up button (🔼) at the top of the Devices picker in the top left hand corner, to the right of the run app button 😂

The error I had in XCode was "iOS version lower than deployment target", which I didn't know how to fix. The error was displayed where the iPhone should have been indicated as a Device (upper left). I selected the project in Project Navigator and noticed that the iOS Deployment Target was set to 11.3 but when I checked my iPhone it was set to 11.2.1 (or something lower than 11.3). So I opened Settings on the phone, scrolled down to General and tapped Software Update. Since the update said it was scheduled but didn't start, I decided to take the SIM card out of my other phone and put it in the iPhone I was using for testing. Then the upgrade started quickly. After the Update finished on the phone, however, XCode still didn't recognize the phone. I unplugged the USB cable but didn't hear any sound, so I plugged it into another USB port on the computer and then heard a sound. Then XCode noticed the phone. So the problems were that the iPhone didn't inform me that I had an Update (or I ignored it and forgot about it) and it may have needed the SIM card, and I had a bad USB connection.

Had the same problem. In my case it was my usb cord.

Here is how I figured out the problem. Go to Xcode -> Window -> Device and Simulators -> Devices. There you could see Errors and Warnings. I found that my Xcode has to be updated because IOS version of my device is higher.

I had this problem. I somehow registered the device for generic team on apple. I don't remember how I did it now. Then I was able to overcome this error.

Just unplug the cable of iPhone with your mac and then plug cable in mac work for me.I hope it's work for someone.

Xcode 6.3 didn't see my iPhone running iOS 8.3 even after a computer restart. I then restarted my iPhone and everything worked again. Love buggy software!

When you trying to build and run the current scheme but encounter this alert message:

"The run destination iPhone is not valid for Running the scheme."

Plus you already check your phone and it is connect to your Mac properly, all you need to do is just simply restart your Xcode and build it again. That will do the job.

Ran into this issue having upgraded from XCode 9 to 10.1. No devices at all were appearing in XCode, despite performing all the steps listed in other answers.

For me the solution was to do a clean CMake build, deleting the old Xcode project files.

Xcode 10.2.1 was not recognizing my ipad mini. I unplugged and rebooted the mini and it became visible.

Not the answer you're looking for? Browse other questions tagged iphone ios xcode ipad provisioning or ask your own question.

172
Could not launch process launch failed: timed out waiting for app to launch
4
Sending my Flutter App to my real iPhone instead of the simulator
7
All devices targets on xcode become "unavailble"
1
Trouble pairing Apple TV with Xcode
2
Mac recognizes iPhone, Xcode does not