Is there a way to make a PowerShell script work by double clicking a .ps1 file?

I am distributing a PowerShell script to my team. The script is to fetch an IP address from the Vsphere client, make an mstsc connection, and log it in a shared file.

The moment they used the script they got to know the IP address of machine. After that, they always tend to use mstsc directly instead of running the PowerShell script. (As they are using mstsc I am not able to know whether they are using the VM frequently or not.)

Mainly they are telling me that running PowerShell is not straightforward.

I am sick by their laziness.

Is there a way to make a PowerShell script work by double clicking a .ps1 file?

Create a shortcut with something like this as the "Target":

Or if you want all PS1 files to work the way VBS files do, you can edit the registry like this:

Edit the Default value to be something like so...

Then you can just double click all your .PS1 files like you would like to. in my humble opinion, be able to out of the box.

This worked for me on Windows 10 and powershell 5.1:

Be aware that one of PowerShell's security features is that users can NOT launch script with a double click. Use great care if you modify this setting. An alternative might be to package your script. Some editors like PrimalScript can do that. The users still need PowerShell installed but then they can double-click the exe. And it sounds like your team needs a little education.

I wrote this a few years ago (run it with administrator rights):

I agree that setting a system setting may be a bit much, but the shortcut requiring a hardcoded path is not ideal. A bat file actually solves the problem nicely

This batch file can now be double clicked on, shortcuts can be easily created to the batch file, and the script can be deployed to any folder.

You'll need to tweak registry. First, configure a PSDrive for HKEY_CLASSES_ROOT since this isn’t set up by default. The command for this is:

Now you can navigate and edit registry keys and values in HKEY_CLASSES_ROOT just like you would in the regular HKCU and HKLM PSDrives.

To configure double-clicking to open PowerShell scripts in the PowerShell ISE:

To restore the default value (sets double-click to open PowerShell scripts in Notepad):

Simple PowerShell commands to set this in the registry;

I tried the top-most answers to this question, but encountered error messages. Then I found the answer here:

PowerShell says "execution of scripts is disabled on this system."

What worked well for me was to use this solution:

You can paste that into a .bat file and double-click on it.

You may set the default file association of ps1 files to be powershell.exe which will allow you to execute a powershell script by double clicking on it.

That will change the file association and ps1 files will execute by double-clicking them. You may change it back to its default behavior by setting notepad.exe to the default app.

put a simple .cmd file in my subfolder with my .ps1 file with the same name, so, for example, a script named "foobar" would have "foobar.ps1" and "foobar.cmd". So to run the .ps1, all I have to do is click the .cmd file from explorer or run the .cmd from a command prompt. I use the same base name because the .cmd file will automatically look for the .ps1 using its own name.

The pushd/popd allows you to launch the .cmd file from a command prompt without having to change to the specific directory where the scripts are located. It will change to the script directory then when complete go back to the original directory.

You can also take the pause off if you want the command window to disappear when the script finishes.

If my .ps1 script has parameters, I prompt for them with GUI prompts using .NET Forms, but also make the scripts flexible enough to accept parameters if I want to pass them instead. This way I can just double-click it from Explorer and not have to know the details of the parameters since it will ask me for what I need, with list boxes or other forms.

Revert the value if you wish to use Notepad as the default again.

A solution in the same spirit as UNIX shar (shell archive).

You can put your powershell script in a file with the .cmd extension (instead of .ps1), and put this at the start:

If you are familiar with advanced Windows administration, then you can use this ADM package (instructions are included on that page) and allow running PowerShell scripts after double click via this template and Local GPO. After this you can simply change default program associated to .ps1 filetype to powershell.exe (use search, it's quite stashed) and you're ready to run PowerShell scripts with double click.

Otherwise, I would recommend to stick with other suggestions as you can mess up the whole system with these administrations tools.

I think that the default settings are too strict. If someone manages to put some malicious code on your computer then he/she is also able to bypass this restriction (wrap it into .cmd file or .exe, or trick with shortcut) and all that it in the end accomplishes is just to prevent you from easy way of running the script you've written.

This is based on KoZm0kNoT's answer. I modified it to work across drives.

The two pushd/popds are necessary in case the user's cwd is on a different drive. Without the outer set, the cwd on the drive with the script will get lost.

This is what I use to have scrips run as admin by default:

You'll need to paste that into regedit as the default value for:

Or here's a script that will do it for you:

I used this (need to run it only once); also make sure you have rights to execute:

from PowerShell with elevated rights:

then from a bat file:

and voila; double-clicking a *.ps1 will execute it.

In Windows 10 you might also want to delete Windows Explorer's override for file extension association:

in addition to the HKEY_CLASSES_ROOT\Microsoft.PowerShellScript.1\Shell\open\command change mentioned in other answers.

You can use the Windows 'SendTo' functionality to make running PS1 scripts easier. Using this method you can right click on a PS1 script and execute. This is doesn't exactly answer the OP question but it is close. Hopefully, this is useful to others. BTW.. this is helpful for a variety of other tasks.

You may not want to but an easy way is just to create a .BAT file and put your command in:

Powershell registry hacks and policy bypass never worked for me. 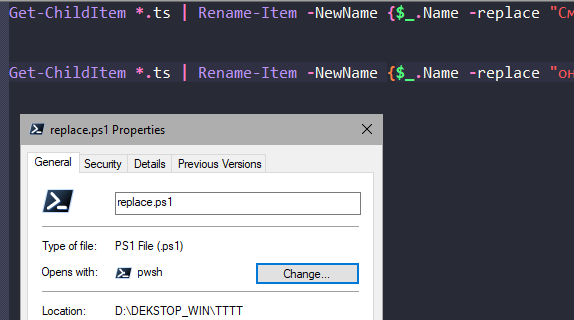 Set the default value for the HKEY_CLASSES_ROOT\Microsoft.PowerShellScript.1\Shell to 0

Not the answer you're looking for? Browse other questions tagged powershell powershell-2.0 or ask your own question.

2
How do I make it so that double-clicking a ps1 file opens powershell?
1
Run file with Powershell
0
Powershell file won't work with double-click
0
Set default application for .ps1 files as powershell.exe
2574
PowerShell says "execution of scripts is disabled on this system."
63
Associate File Extension with Application
26
assoc and ftype do not work under Powershell
4
How to disable touch screen of laptops using PowerShell script?
2
Is it possible to know if a PowerShell script is launched from GUI or console?
1
How do I create a bat file that executes powershell script without an external ps1 file?
See more linked questions