I have a .net application built on .net framework 3.5, I am trying to build this application on Jenkins CI server. I've added MSBuild plugin and and have added path to the .exe file of 2.0, 3.5 and 4.0 versions of MSBuild. But my building processes are failing by showing the below error message.

Could anyone plz help me out..??

To make the MSBuild plugin work, you need to configure the plugin in the Jenkins management screen.

NOTE: in the newer Jenkins versions you find the MSBuild configuration in the Global Tool Configuration: 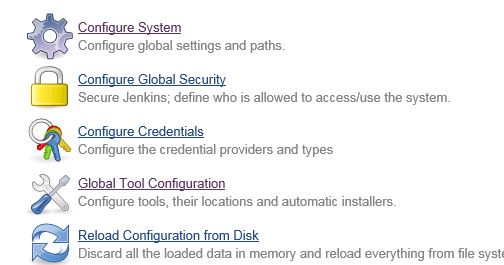 Note the "Name" field, where I've called this particular configuration v4.0.30319. You could call it anything you like, but ideally the name will somehow refer to the version.

You'll need to refer to this name later in the Jenkins PROJECT that's failing.

Note: The yellow warning implies that the Path to MSBuild field should be populated with a directory name rather than a file name. In practice you do need to enter the filename here too (ie. msbuild.exe) or the build step will fail.

In the Jenkins project that's failing, go to the MSBuild build step.

The first field in the build step is "MSBuild Version". If you created the build step before configuring any MSBuild versions, the value here will be (default).

After configuring one or more MSBuild versions, the drop down will be populated with the available configurations. Select the one you require.

You can see here that I've now selected the named configuration that matches the installation above.

scroll down to the MSBuild section and click MSBuild installations

Note - specify the path to 32-bit tools even on a 64-bit system, otherwise you might get an error message:

So in Jenkins - it could be for example:

I think you should set an absolute path for "msbuild.exe" in your Jenkins configuration, for example:

You can also add the path where the msbuild.exe is, to the PATH system environment variable of the node (or nodes) that is running that specific job.

You could try executing the

command, which will temporarily update your environment path variables to reflect the VS2010 build environment. Execute this before you call MSBUILD and see what happens. I use this in my own build scripts with no issues.

Side note; it's very likely counterproductive to have multiple versions of MSBUILD on your PATH. Concentrate on getting one version working and go from there.

Not the answer you're looking for? Browse other questions tagged c# .net msbuild continuous-integration jenkins or ask your own question.

2324
Should 'using' directives be inside or outside the namespace?
2337
Difference between decimal, float and double in .NET?
1093
How can I get the application's path in a .NET console application?
293
MSBuild doesn't copy references (DLL files) if using project dependencies in solution
1396
Send HTTP POST request in .NET
190
How do I run msbuild from the command line using Windows SDK 7.1?
0
MSBuild 'not recognized as an internal or external command' on Hudson
0
.Net Core & Jenkins CI Build
2
MSBuild configuration in jenkins