How can I install and use ack library on Windows?

I have never used Perl, but I am really impressed by the ack, which I would like to use for source code searching, etc.

Can anyone guide me of how to make use of this excellent library on Windows?

Install App::Ack by typing (in a windows command shell)

And undoubtedly this will prove useful http://learn.perl.org/

Not all the tests pass on all versions of Windows. You can most likely get 100% functionality from ack even if the install tests fail. Here is the command to force installation if failing tests prevent a normal install:

If you already have msysgit installed, then you don't need to install Perl, because you already have a version. You just need to download the standalone version of ack and put it somewhere in your bash path1. You can then run ack from your msysgit bash prompt.

If you also want to be able to run ack from the Windows command prompt, then you will need to create a batch script somewhere in your Windows path2 with the contents:

(You'll obviously need to edit the paths above to match your msysgit installation and where you placed the ack script.)

If you have cygwin installed, you can simply download the standalone version. Perl is installed with cygwin. Here are the steps:

Remove the comments from the lines:

Note: you will have to manually install curl as it doesn't come with cygwin by default.

You should also run the following command to enable color highlights: cpan Win32::Console::ANSI

I had to force cpan to install App::Ack since some of the tests didn't pass:

Nothing worked for me, until I went to the ack website and saw this. 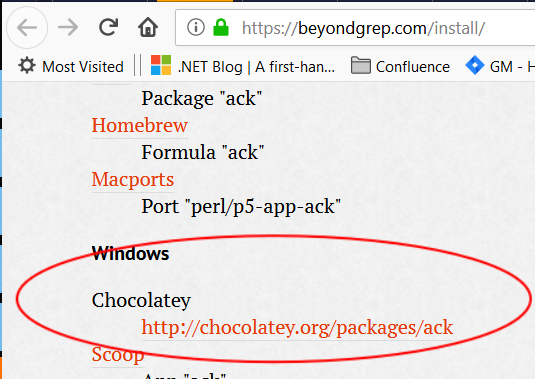 And I ran the following command in cmd prompt:

Depending on how you feel about installing pre-built binaries from open source projects, you might also consider The Silver Searcher (ag). It's ack-compatible and faster than ack. It's also available on Linux from the repositories in recent distros.

You can install ack via cpan:

it should work from there, followed this guide: http://www.jeedo.net/how-to-install-ack-on-windows-10/

Worked without any hitches.

Not the answer you're looking for? Browse other questions tagged windows perl ack or ask your own question.

1208
How can I develop for iPhone using a Windows development machine?
2555
How can you find out which process is listening on a port on Windows?
2462
Is there an equivalent of 'which' on the Windows command line?
1201
Ignoring directories in Git repositories on Windows
234
How to install both Python 2.x and Python 3.x in Windows
2596
How can I install pip on Windows?
569
Why does modern Perl avoid UTF-8 by default?
941
Failed to load the JNI shared Library (JDK)
599
How do I install and use curl on Windows?
984
Can't start Eclipse - Java was started but returned exit code=13