How do I make the first letter of a string uppercase in JavaScript?

How do I make the first letter of a string uppercase, but not change the case of any of the other letters?

The basic solution is:

Some other answers modify String.prototype (this answer used to as well), but I would advise against this now due to maintainability (hard to find out where the function is being added to the prototype and could cause conflicts if other code uses the same name / a browser adds a native function with that same name in future).

...and then, there is so much more to this question when you consider internationalisation, as this astonishingly good answer (buried below) shows.

If you want to work with Unicode code points instead of code units (for example to handle Unicode characters outside of the Basic Multilingual Plane) you can leverage the fact that String#[@iterator] works with code points, and you can use toLocaleUpperCase to get locale-correct uppercasing:

For even more internationalization options, please see the original answer below.

With the expected output being:

Here is a shortened version of the popular answer that gets the first letter by treating the string as an array:

According to the comments below this doesn't work in IE 7 or below.

To avoid undefined for empty strings (see @njzk2's comment below), you can check for an empty string:

If you're interested in the performance of a few different methods posted:

Here are the fastest methods based on this jsperf test (ordered from fastest to slowest). 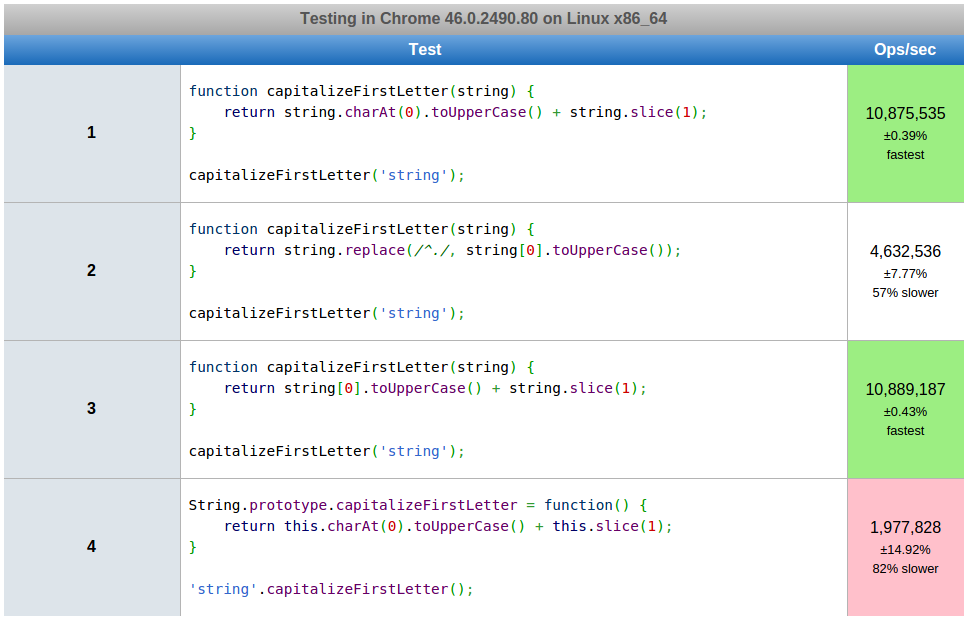 I didn’t see any mention in the existing answers of issues related to astral plane code points or internationalization. “Uppercase” doesn’t mean the same thing in every language using a given script.

Initially I didn’t see any answers addressing issues related to astral plane code points. There is one, but it’s a bit buried (like this one will be, I guess!)

However, some cased characters fall outside the BMP (basic multilingual plane, code points U+0 to U+FFFF). For example take this Deseret text:

The first character here fails to capitalize because the array-indexed properties of strings don’t access “characters” or code points*. They access UTF-16 code units. This is true also when slicing — the index values point at code units.

It happens to be that UTF-16 code units are 1:1 with USV code points within two ranges, U+0 to U+D7FF and U+E000 to U+FFFF inclusive. Most cased characters fall into those two ranges, but not all of them.

From ES2015 on, dealing with this became a bit easier. String.prototype[@@iterator] yields strings corresponding to code points**. So for example, we can do this:

For longer strings, this is probably not terribly efficient*** — we don’t really need to iterate the remainder. We could use String.prototype.codePointAt to get at that first (possible) letter, but we’d still need to determine where the slice should begin. One way to avoid iterating the remainder would be to test whether the first codepoint is outside the BMP; if it isn’t, the slice begins at 1, and if it is, the slice begins at 2.

You could use bitwise math instead of > 0xFFFF there, but it’s probably easier to understand this way and either would achieve the same thing.

We can also make this work in ES5 and below by taking that logic a bit further if necessary. There are no intrinsic methods in ES5 for working with codepoints, so we have to manually test whether the first code unit is a surrogate****:

At the start I also mentioned internationalization considerations. Some of these are very difficult to account for because they require knowledge not only of what language is being used, but also may require specific knowledge of the words in the language. For example, the Irish digraph "mb" capitalizes as "mB" at the start of a word. Another example, the German eszett, never begins a word (afaik), but still helps illustrate the problem. The lowercase eszett (“ß”) capitalizes to “SS,” but “SS” could lowercase to either “ß” or “ss” — you require out-of-band knowledge of the German language to know which is correct!

The most famous example of these kinds of issues, probably, is Turkish. In Turkish Latin, the capital form of i is İ, while the lowercase form of I is ı — they’re two different letters. Fortunately we do have a way to account for this:

In a browser, the user’s most-preferred language tag is indicated by navigator.language, a list in order of preference is found at navigator.languages, and a given DOM element’s language can be obtained (usually) with Object(element.closest('[lang]')).lang || YOUR_DEFAULT_HERE in multilanguage documents.

In agents which support Unicode property character classes in RegExp, which were introduced in ES2018, we can clean stuff up further by directly expressing what characters we’re interested in:

This could be tweaked a bit to also handle capitalizing multiple words in a string with fairly good accuracy. The CWU or Changes_When_Uppercased character property matches all code points which, well, change when uppercased. We can try this out with a titlecased digraph characters like the Dutch ĳ for example:

As of January 2021, all major engines have implemented the Unicode property character class feature, but depending on your target support range you may not be able to use it safely yet. The last browser to introduce support was Firefox (78; June 30, 2020). You can check for support of this feature with the Kangax compat table. Babel can be used to compile RegExp literals with property references to equivalent patterns without them, but be aware that the resulting code can sometimes be enormous. You probably would not want to do this unless you’re certain the tradeoff is justified for your use case.

In all likelihood, people asking this question will not be concerned with Deseret capitalization or internationalization. But it’s good to be aware of these issues because there’s a good chance you’ll encounter them eventually even if they aren’t concerns presently. They’re not “edge” cases, or rather, they’re not by-definition edge cases — there’s a whole country where most people speak Turkish, anyway, and conflating code units with codepoints is a fairly common source of bugs (especially with regard to emoji). Both strings and language are pretty complicated!

* The code units of UTF-16 / UCS2 are also Unicode code points in the sense that e.g. U+D800 is technically a code point, but that’s not what it “means” here ... sort of ... though it gets pretty fuzzy. What the surrogates definitely are not, though, is USVs (Unicode scalar values).

** Though if a surrogate code unit is “orphaned” — i.e., not part of a logical pair — you could still get surrogates here, too.

*** maybe. I haven’t tested it. Unless you have determined capitalization is a meaningful bottleneck, I probably wouldn’t sweat it — choose whatever you believe is most clear and readable.

**** such a function might wish to test both the first and second code units instead of just the first, since it’s possible that the first unit is an orphaned surrogate. For example the input "\uD800x" would capitalize the X as-is, which may or may not be expected.

For another case I need it to capitalize the first letter and lowercase the rest. The following cases made me change this function:

If you're already (or considering) using Lodash, the solution is easy:

Capitalize the first letter of all words in a string:

There is a very simple way to implement it by replace. For ECMAScript 6:

If the transformation is needed only for displaying on a web page:

Benchmark between substring() and slice()

The difference is rather minuscule nowadays (run the test yourself): 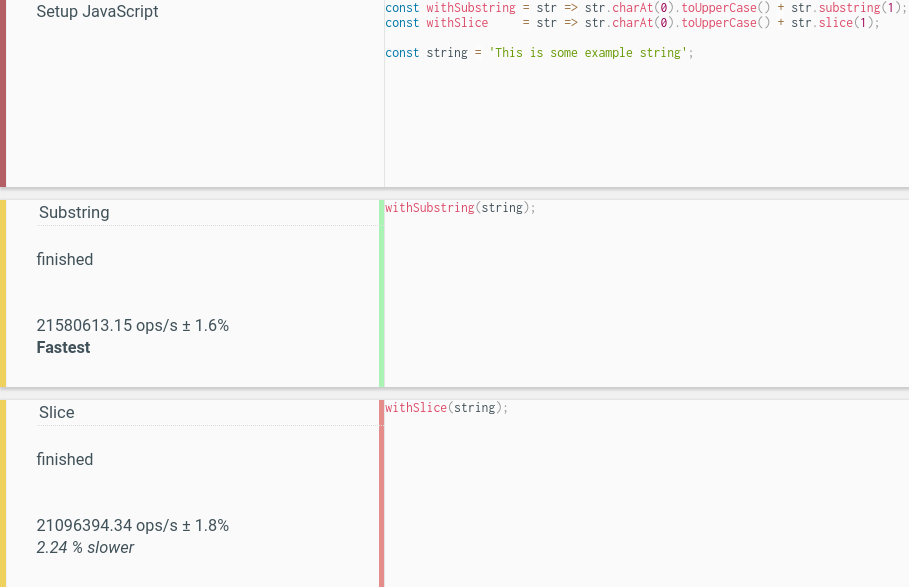 It's always better to handle these kinds of stuff using CSS first, in general, if you can solve something using CSS, go for that first, then try JavaScript to solve your problems, so in this case try using :first-letter in CSS and apply text-transform:capitalize;

So try creating a class for that, so you can use it globally, for example: .first-letter-uppercase and add something like below in your CSS:

Also the alternative option is JavaScript, so the best gonna be something like this:

If you want to reuse it over and over, it's better attach it to javascript native String, so something like below:

and call it as below:

We could get the first character with one of my favorite RegExp, looks like a cute smiley: /^./

...and for all guys who think that there's a better way of doing this, without extending native prototypes:

SHORTEST 3 solutions, 1 and 2 handle cases when s string is "", null and undefined:

You can capitalise a string by calling ucfirst("some string") -- for example,

It works by splitting the string into two pieces. On the first line it pulls out firstLetter and then on the second line it capitalises firstLetter by calling firstLetter.toUpperCase() and joins it with the rest of the string, which is found by calling str.substr(1).

It will output "Ruby java" to the console.

If you use Underscore.js or Lodash, the underscore.string library provides string extensions, including capitalize:

_.capitalize(string) Converts first letter of the string to uppercase.

If you're ok with capitalizing the first letter of every word, and your usecase is in HTML, you can use the following CSS:

This is from CSS text-transform Property (at W3Schools).

If you are wanting to reformat all-caps text, you might want to modify the other examples as such:

This will ensure that the following text is changed:

I found this arrow function easiest. Replace matches the first letter character (\w) of your string and converts it to uppercase. Nothing fancier is necessary.

57 81 different answers for this question, some off-topic, and yet none of them raise the important issue that none of the solutions listed will work with Asian characters, emoji's, and other high Unicode-point-value characters in many browsers. Here is a solution that will:

Do note that the above solution tries to account for UTF-32. However, the specification officially states that browsers are required to do everything in UTF-16 mapped into UCS2. Nevertheless, if we all come together, do our part, and start preparing for UTF32, then there is a chance that the TC39 may allow browsers to start using UTF-32 (like how Python uses 24-bits for each character of the string). This must seem silly to an English speaker: no one who uses only latin-1 has ever had to deal with Mojibake because Latin-I is supported by all character encodings. But, users in other countries (such as China, Japan, Indonesia, etc.) are not so fortunate. They constantly struggle with encoding problems not just from the webpage, but also from the JavaScript: many Chinese/Japanese characters are treated as two letters by JavaScript and thus may be broken apart in the middle, resulting in � and � (two question-marks that make no sense to the end user). If we could start getting ready for UTF-32, then the TC39 might just allow browsers do what Python did many years ago which had made Python very popular for working with high Unicode characters: using UTF-32.

Check out this solution:

Only because this is really a one-liner I will include this answer. It's an ES6-based interpolated string one-liner.

The ucfirst function works if you do it like this.

Thanks J-P for the aclaration.

Not the answer you're looking for? Browse other questions tagged javascript string letter capitalize or ask your own question.