Finding loop in a singly linked-list

How can I detect that whether a singly linked-list has loop or not?? If it has loop then how to find the point of origination of the loop i.e. the node from which the loop has started.

You can detect it by simply running two pointers through the list, this process is known as the tortoise and hare algorithm after the fable of the same name:

Consider the following loop which starts at 3:

Starting tortoise at 1 and hare at 2, they take on the following values:

Because they become equal at (6,6), and since hare should always be beyond tortoise in a non-looping list, it means you've discovered a cycle.

Once you know a node within the loop, there's also an O(n) guaranteed method to find the start of the loop.

Let's return to the original position after you've found an element somewhere in the loop but you're not sure where the start of the loop is.

You can see that with the following walkthrough:

Hence 3 is the start point of the cycle and, since both those operations (the cycle detection and cycle start discovery) are O(n) and performed sequentially, the whole thing taken together is also O(n).

If you want a more formal proof that this works, you can examine the following resources:

If you're simply after support for the method (not formal proof), you can run the following Python 3 program which evaluates its workability for a large number of sizes (how many elements in the cycle) and lead-ins (elements before the cycle start).

You'll find it always finds a point where the two pointers meet:

The selected answer gives an O(n*n) solution to find the start node of the cycle. Here's an O(n) solution:

Once we find the slow A and fast B meet in the cycle, make one of them still and the other continue to go one step each time, to decide the perimeter of the cycle, say, P.

Then we put a node at the head and let it go P steps, and put another node at the head. We advance these two nodes both one step each time, when they first meet, it's the start point of the cycle.

I read this answer in Data structure book by Narasimha Karamanchi.

We can use Floyd cycle finding algorithm, also known as tortoise and hare algorithm. In this, two pointers are used; one (say slowPtr) is advanced by a single node, and another (say fastPtr) is advanced by two nodes. If any loop is present in the single linked list, they both will surely meet at some point.

If there exists any loop then we point one of the pointers to the head and now advance both of them by single node. The node at which they will meet will be the start node of the loop in the single linked list.

For the most part all the previous answers are correct but here is a simplified version of the logic with visual & code (for Python 3.7)

The logic is very simple as others explained it. I'm gonna create Tortoise/slow and Hare/fast. If we move two pointers with different speed then eventually fast will meet the slow !! you can also think of this as two runners in a tack circular field. If the fast runner keeps going in circle then it will meet/pass the slow runner.

So, we will move Tortoise/slow pointer with speed 1 for each iteration while we keep incrementing or move the Hare/fast pointer with speed of 2. Once they meet we know there is a cycle. This is also known as Floyd's cycle-finding algorithm 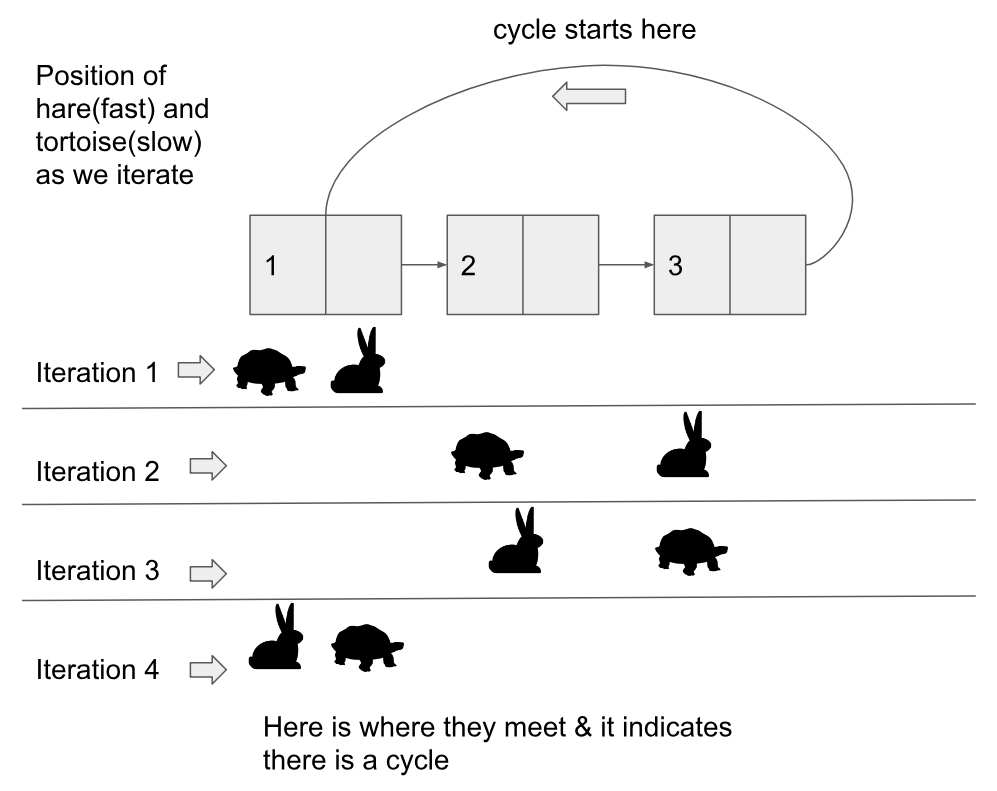 Here is the Python code that does this (notice has_cycle method is the main part):

Following code will find whether there is a loop in SLL and if there, will return then starting node.

ok - I ran into this in an interview yesterday - no reference material available and I came up with a very different answer (while driving home of course...) Since the linked lists are NORMALLY (not always I admit) allocated using malloc logic then we know that the granularity of the allocations is known. On most systems this is 8 bytes - this means that the bottom 3 bits are always zeros. Consider - if we place the linked list in a class to control access and use a mask of 0x0E ored into the next address then we can use the lower 3 bits to store a break crumb Thus we can write a method that will store our last breadcrumb - say 1 or 2 - and alternate them. Our method that checks for a loop can then step through each node (using our next method) and check if the next address contains the current breadcrumb - if it does we have a loop - if it does not then we would mask the lower 3 bits and add our current breadcrumb. The breadcrumb checking algorithm would have to be single threaded as you could not run two of them at once but it would allow other threads to access the list async - with the usual caveats about adding/deleting nodes. What do you think? If others feel this is a valid solution I can write up the sample class ... Just think sometimes a fresh approach is good and am always willing to be told I have just missed the point... Thanks All Mark

Call the function from main()

A quite different method:- Reverse the linked list. While reversing if you reach the head again then there is a loop in the list, if you get NULL then there is no loop. The total time complexity is O(n)