How can I fix the SVN import line endings error?

I have to import an huge SVN repository that I have to transfer from one server to another. So I exported it from the old server:

and imported it on the new one:

In the middle of the import process I got this error:

How can I fix this? I have full control of both servers.

Have you changed the server version? This is a known issue in 1.6, and causes problems when going from 1.4 or 1.5.

Subversion 1.6 no longer accepts carriage returns (^M) in property files. You'll need to fix the line breaks in your svn:ignore file(s), or recreate if that's easier.

Alternatively, you could go for Subversion 1.7, or use uberSVN.

You have 2 options, repair the source or disable prop validation.

Repairing the source (svn:log and svn:ignore):

Where ^M is a control character, that means 0D in hex. To get it use ^V^M (control V control M) instead ^M (circumflex M or control M)

The first option of the answer of @ventura10 sounded good but didn't work for me. The sed command changed some versioned content outside the properties section resulting in md5 mismatches while loading the dump.

Because my repository has no properties with binary content I changed the sed command to correct all properties and not only svn:log and svn:ignore. I was also sure that no versioned file contained a line starting with Prop-content-length:. Otherwise I would have got an error when loading the dump.

It's important to replace ^M with [blank], because the size of the property value must not change.

The note of @ventura10 is still valid:

^M is a control character, that means 0D in hex. To get it use ^V^M (control V control M) instead ^M (circumflex M or control M)

It's hard to believe that upgrading an existing repository from svn 1.4 to svn 1.7 makes this step nessecary, but I've found no other way to get rid of the carriage returns that are no longer accepted since svn 1.6.

With a little gymnastics you can work around this using svnsync, which has the ability to fix the EOLs. Let's say that your repository is dumped in archive.svn.

First create the repository to load the repo back, ignoring the EOL problems:

Now create a new repository for copying into:

svnsync requires some pre-commit hook, even if you don't use it, so just use your editor to create an empty one in repo-fixed/hooks/pre-revprop-change:

Initialize the destination repository for svnsync:

Now copy the entire repository over:

Whew! svnsync will even give you good news: NOTE: Normalized svn:* properties to LF line endings (Why the Subversion team didn't update svnadmin to do the same normalization is a mystery to me.)

You now have archive-fixed.svn, which should be identical to archive.svn except the EOLs have been fixed as needed.

(Optional) You can now remove the temporary repository you used for svnsync:

Update It turns out if you load this new dump, your Subversion client gets an error: Repository UUID does not match expected UUID. You'll have to use svnadmin setuuid ... to change the UUID ID to what it used to be.

(This post is a culmination of a multitude of snippets and partial solutions I found around the web. Thanks to all the people who knew more than I did; I just put it all together.)

@tangens solution works too for me, but it's not perfect as I'm getting an extra space character as the replacement of the carriage return characters. I did however test that the svn:ignore still works with that extra space, but I didn't test the other SVN properties.

The downside of using the svndumptool is it can only work on one svn property at one time, which is time consuming if your dump files are big.

The --bypass-prop-validation did not appeal to me because it postpones the problem, the next time you need to restore the repo you will hit the same promblem.

I found a bash script to loop through the revisions getting the comments and setting them again but this did not work.

An improvement on ventura10's solution did the job. Because of the size of the dump I ended up using the single command to remove the unwanted characters while restoring the dump

Where ^M is a control character, that means 0D in hex. To get it use ^V^M (control V control M) instead ^M (circumflex M or control M)

I just repaired a svn dump file successfully. It also had a CRLF in the properties, which caused an Exception in SVN Edge dump import (they have a really bad import routine). Then I "installed" svnserve for testing, which was much easier than expected (instructions for Windows OS):

svnserve will give you detailed info what failed.

And here's what you have to repair (original on left, repaired on right side): 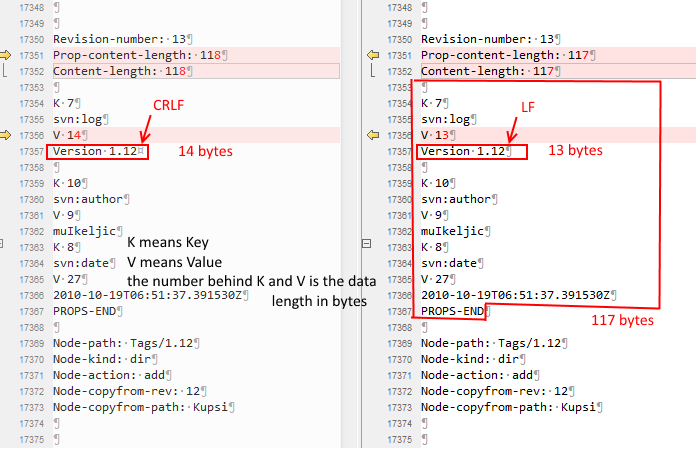 The --normalize-props switch was added to subversion 1.10. For details, refer to https://subversion.apache.org/docs/release-notes/1.10.html#normalize-props

A new --normalize-props option has been added to the svnadmin load command. This option can be used to automatically repair non-LF line endings in properties such as svn:log or svn:ignore. Such invalid line endings were accepted by older servers and can be found in repository dumps of older repositories, but are rejected by Subversion 1.6 and later.

Calling svnadmin load with --normalize-props will automatically repair all invalid property line endings found in the dumpstream, thus ensuring that the appropriate values are loaded into the repository.

My problem was that the commentary of the commit was too big.

Not the answer you're looking for? Browse other questions tagged svn import line-endings or ask your own question.

1543
How do I migrate an SVN repository with history to a new Git repository?
769
How do I ignore a directory with SVN?
76
svn switch error - is not the same repository
70
An SVN error (200 OK) when checking out from my online repository
1061
How to have git log show filenames like svn log -v
1
How to populate a repository with a copy of an old svn repository
0
import svn repository to remote server
0
how to migrate local svn repo to google code's svn repo?
2282
How do I import an SQL file using the command line in MySQL?
1
How big should be disk for SVN load