How to paint on a Canvas with Transparency and Opacity?

From the GR32 library, I am using TImgView32 to render a grid which will be my transparent background like so:

Placed inside the TImgView32 I have a regular TImage, where I will be drawing onto the canvas, something like this:

I found this question earlier whilst searching around: Draw opacity ellipse in Delphi 2010 - Andreas Rejbrand has provided a few examples in his answer for that question.

I have looked at what Andreas did, and came up with my own simplified attempt but I am stuck with a problem. Take a look at these next two images, the first is with the transparent background and the second with a black background to show the problem more clearer:

As you can see, around the brush (circle) is a really annoying square I cannot get rid of. All that should be visible is the brush. This is my code used to produce those results:

which produces this on a regular bitmap: 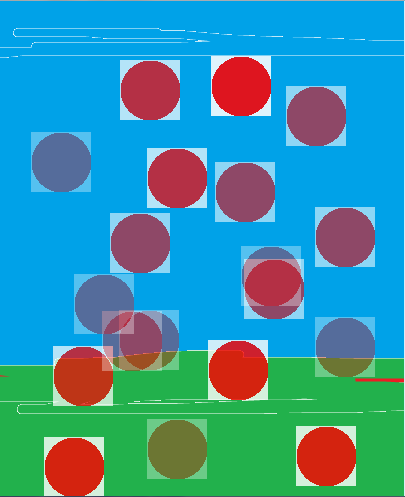 The idea I had (based on Andreas way of creating an ellipse with opacity) was to render a typical brush on the canvas, assign it to a offscreen bitmap then redraw it onto the main bitmap with the opacity. Which works, except that annoying square around the edge.

How can I render a brush with opacity as illustrated in the screenshots, but without that square around the brush circle?

If I set Bmp.Transparent := True there is still a white box, but no opacity anymore. Just a solid white square and solid filled red circle.

The Opacity feature of TCanvas.Draw() does not support what you are trying to do, at least not the way you are trying to use it. To accomplish the affect you want, you need to create a 32-bit TBitmap so you have a per-pixel alpha channel, then fill in the alpha for each pixel, setting the alpha to 0 for pixels you don't want, and setting the alpha to the desired opacity for the pixels you do want. Then, when calling TCanvas.Draw(), set its opacity to 255 to tell it to use just the per-pixel opacities.

6
Draw opacity ellipse in Delphi 2010
6
Canvas Drawing - How can I Improve this Alpha Drawing routine?

6
Draw opacity ellipse in Delphi 2010
2
How do I create nodes with transparent backgrounds in a TVirtualDrawTree?
6
Canvas Drawing - How can I Improve this Alpha Drawing routine?
4
How to render a chessboard grid on a Bitmap?
4
How to draw a bitmap with per-pixel alpha onto a control's Canvas?
8
How to draw fade out text on a custom TGraphicControl?
5
Combination of Canvas.TransparentColor and Canvas.Draw with Opacity
8
Creating a transparent custom bitmap brush
1
Delphi, Direct2D, TBitmap and Transparency
3
Delphi FMX TImage manual alpha transparency mapping failure