Why is document.all falsy?

document.all is a non-primitive object in the DOM that is falsy.

For example, this code doesn't do anything:

Can someone explain why this is?

Disclaimer: I’m the guy who tweeted the question that led to this thread :) It was a question I would ask and answer in my Front-Trends talk. I wrote that tweet 5 minutes before going on stage.

The question I was asking is the following. 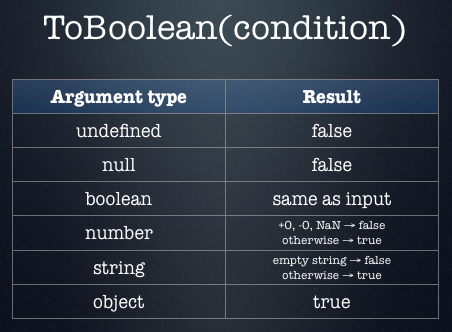 As you can see, all non-primitive objects (i.e. all objects that aren’t a boolean, a number, a string, undefined, or null) are truthy as per the spec. However, in the DOM, there is one exception to this — a DOM object that is falsy. Do you know which one that is?

The answer is document.all. The HTML spec says:

The all attribute must return an HTMLAllCollection rooted at the Document node, whose filter matches all elements.

The object returned for all has several unusual behaviors:

The user agent must act as if the ToBoolean() operator in JavaScript converts the object returned for all to the false value.

The user agent must act as if, for the purposes of the == and != operators in JavaScript, the object returned for all is equal to the undefined value.

The user agent must act such that the typeof operator in JavaScript returns the string 'undefined' when applied to the object returned for all.

These requirements are a willful violation of the JavaScript specification current at the time of writing (ECMAScript edition 5). The JavaScript specification requires that the ToBoolean() operator convert all objects to the true value, and does not have provisions for objects acting as if they were undefined for the purposes of certain operators. This violation is motivated by a desire for compatibility with two classes of legacy content: one that uses the presence of document.all as a way to detect legacy user agents, and one that only supports those legacy user agents and uses the document.all object without testing for its presence first.

So, document.all is the only official exception to this ECMAScript rule. (In Opera, document.attachEvent etc. are falsy too, but that’s not specced anywhere.)

The above text explains why this was done. But here’s an example code snippet that’s very common on old web pages, and that will illustrate this further:

But sadly, a lot of existing code does it the other way around.

The simplest fix for this problem is to simply make document.all be falsy in browsers that still mimic it.

There is now an [[IsHTMLDDA]] internal slot for objects:

The HTML Standard has also been updated to add that internal slot for objects that implement the HTMLAllCollection interface:

Objects that implement the HTMLAllCollection interface are legacy platform objects with an additonal [[Call]] internal method described in the section below. They also have an [[IsHTMLDDA]] internal slot.

The reason for this madness is specified in this note in the HTML Standard:

So basically the standard wants to be compatible with these two types of code:

Modern browsers don't implement this outdated thing any more. It was introduced by IE, but most of the others "shim" it to be compatible.

To make browser detection possible (back in the old days you could tell IE apart from NN by testing for document.all) while supporting document.all syntax, other browsers made the "weird" implementation that typeof document.all returns undefined.

Before FF dropped support for it, it also showed weird behaviour as stated in this message. You may find more internals in Mozilla bug #412247.

In short, it's to make BOTH of these code samples work. Browsers have to do this so that old web pages will continue to work.

7
Why is document.all defined but typeof document.all returns "undefined"?
-1
Why is document.all 'false'?
763
In JavaScript, how to conditionally add a member to an object?
246
All falsey values in JavaScript
10
All objects in JavaScript are truthy per the spec, but in the DOM one non-primitive object is not. Which?
10
Why can I not name a JavaScript function `all`?
2
What is this "document.all" line doing?
0
Instead of Document.all, what can I use?
0
An Object like data type that can be evaluated as false
1
renderable "type trait" in typescript react?
See more linked questions

7420
var functionName = function() {} vs function functionName() {}
1631
Is JavaScript a pass-by-reference or pass-by-value language?
3837
What is the !! (not not) operator in JavaScript?
1749
How to loop through a plain JavaScript object with the objects as members
2326
Get all unique values in a JavaScript array (remove duplicates)
2907
How to store objects in HTML5 localStorage
2353
What is JSONP, and why was it created?
4340
Why does Google prepend while(1); to their JSON responses?
1526
What is the purpose of Node.js module.exports and how do you use it?
3026
Why does my JavaScript code receive a "No 'Access-Control-Allow-Origin' header is present on the requested resource" error, while Postman does not?