gaze estimation from an image of an eye

I've been able to detect pupil and the eye corners accurately so far. You can see a few snaps i uploaded in my answer to my own question here:

Here's what i've done so far. I calibrated the gaze of the user by looking at TLCP, TRCP and BLCP where

calculation of a gaze point GP:

I subtract the TLGP's ordinates' values from the current pupil center's location, because the gaze point has to fall in the hypothetical rectangle whose i hope you understand it, its really very simple.

I've linearly mapped the gaze points calculated from pupil center's location to screen points using a basic scaling system where the scales are calculated as follows:

And for any gaze point P(x,y) i calculate the corresponding screen point Q(m,n) as:

But the problem is, after even almost perfect pupil detection (almost because in poor lighting it gives false positives. But i intend to put that under limitations because i can't work on it, i don't have enough time), i'm still getting poor gaze width and gaze height.

Just look at the gaze points and their corresponding gaze-detected screen points (under them). The vast differences in x,y ordinates' values is bugging me nuts. Monday is the final presentation.

After this approach, i theorized another one where in:

Calibration is done as in the first method. I would detect the motion of the gaze, and its direction. Say, given any two points of pupil center’s location, P and Q, where P is the first gaze point, Q is the second, then we calculate the direction and length of the line PQ.

Let’s assume that the length of this line segment is L. We then scale L to screen proportions, say L is D in screen scale, and given the direction of gaze movement, we move the cursor on the screen from its last point of rest, say R, D distance, to a new point S which will be calculated as the end point of the line segment whose length is D, and starting point S. The figurative representation is given in the figure. Thus basically, i don't map any gaze data to screen point, i basically track the gaze, and convert it into a "push" to be applied to the cursor on the screen. But i haven't implemented it yet. Because it actually doesn't map the gaze to screen co-ordinates, and thus might be erroneous. Motivations for this theory were derived from the eViacam project on sourceforge - they basically track your face, and move the mouse accordingly. In calibration they just calculate how much your face moves along the axes.

Bottom line: So if any of you have any ideas of how to detect a user's gaze from a perfectly processed eye image - one with a detected pupil center and eye corners, please do tell! I've got just about a day, and i know its late, but i just need any magical idea that can help me.

This is not an answer, but it is impossible to post as a comment. I'll delete it after your answer.

Are you sure you have all the necessary parameters? 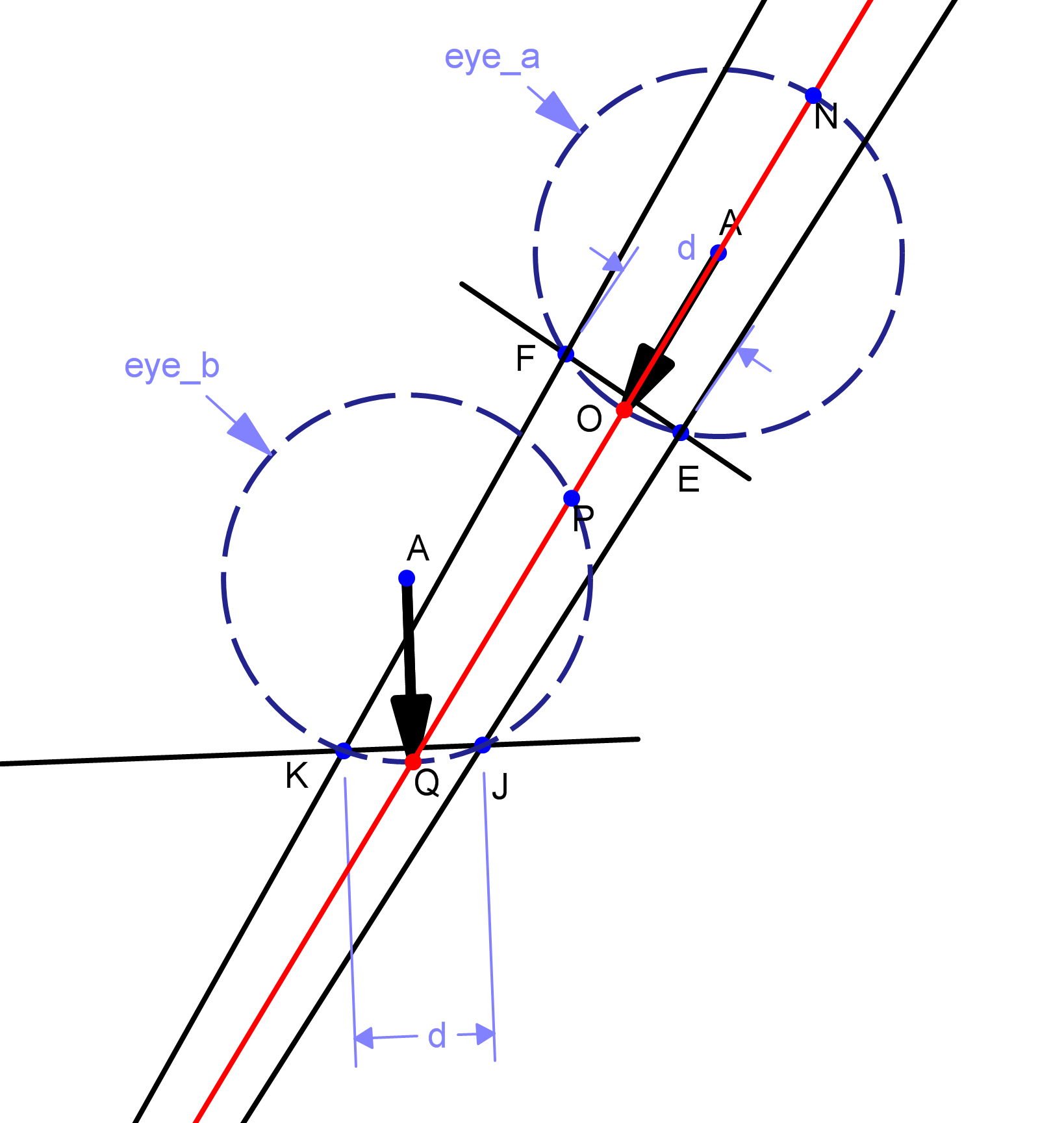 If your camera detects the corners and pupil at {K, J, Q} , how can you distinguish from another triple {F, E, O}? Note that the measures are the same, but the gaze directions, represnted by the black arrows are completely different.

Note: the two black and the red lines were drawn from a single camera point, placed outside the visible region.

17
how to perform stable eye corner detection?
1843
Image Processing: Algorithm Improvement for 'Coca-Cola Can' Recognition
1
Retrieve gaze coordinate on screen
2
Best Facial Landmark that can be easily extracted from NIR Image?
2
Camera calibration and predict the eye focusing point on screen OpenCV / EmguCV
3
Interpretation of Psychopy/iohub Tobii Gaze Data
1
How does Eye tracking calibration helps the gaze estimation?
0
How do I acquire the Eye-gaze location within 2D UWP Apps with HoloLens 2 in C#