I understand that big O is the upper bound and big Omega is the lower bound, but what exactly does big Ө (theta) represent?

I have read that it means tight bound, but what does that mean?

It means that the algorithm is both big-O and big-Omega in the given function.

In other words, for sufficiently large n, it is sandwiched between two linear functions :

First let's understand what big O, big Theta and big Omega are. They are all sets of functions.

We usually use it to analyze complexity of algorithms (like the merge sort example above). When we say "Algorithm A is O(f(n))", what we really mean is "The algorithms complexity under the worst1 case analysis is O(f(n))" - meaning - it scales "similar" (or formally, not worse than) the function f(n).

Why we care for the asymptotic bound of an algorithm?

Well, there are many reasons for it, but I believe the most important of them are:

To demonstrate this issue, have a look at the following graphs:

It is clear that f(n) = 2*n is "worse" than f(n) = n. But the difference is not quite as drastic as it is from the other function. We can see that f(n)=logn quickly getting much lower than the other functions, and f(n) = n^2 is quickly getting much higher than the others.
So - because of the reasons above, we "ignore" the constant factors (2* in the graphs example), and take only the big-O notation.

1Usually, though not always. when the analysis class (worst, average and best) is missing, we really mean the worst case.

Theta(n): A function f(n) belongs to Theta(g(n)), if there exists positive constants c1 and c2 such that f(n) can be sandwiched between c1(g(n)) and c2(g(n)). i.e it gives both upper and as well as lower bound.

O(n): It gives only upper bound (may or may not be tight)

o(n): It gives only upper bound (never a tight bound)

I hope this is what you may want to find in the classical CLRS(page 66): 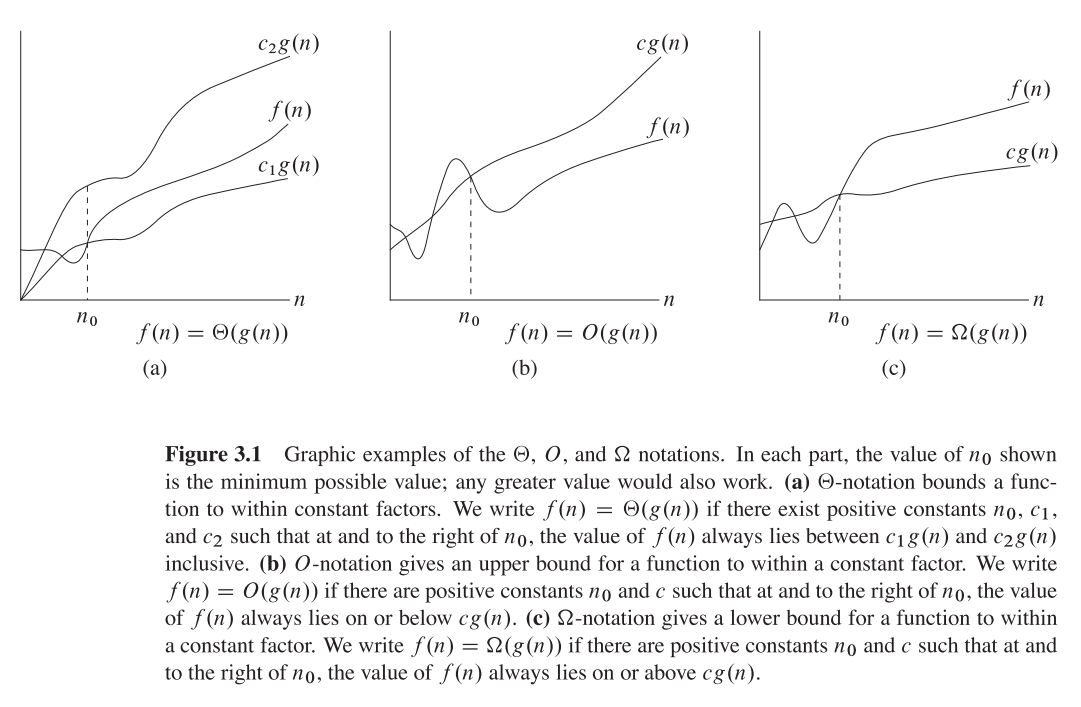 Nothing to mess up buddy!!

Among all the notations ,ϴ notation gives the best intuition about the rate of growth of function because it gives us a tight bound unlike big-oh and big -omega which gives the upper and lower bounds respectively.

First of All Theory

Why People Are so Confused?

In many Blogs & Books How this Statement is emphasised is Like

But What Worth keeping in mind is They Are Just Mathematical Function With Names O, Theta & Omega

so they have same General Formula of Polynomial,

g(n) = n4, So g(n) is Function which Take function as Input and returns Variable with Biggerst Power,

Same f(n) & g(n) for Below all explainations

n4 is playing a role of x here so,

3n4 is our Upper Bound

2n4 is our Lower Bound

This is Calculated to find out that weather lower Bound is similar to Upper bound,

Case 2). if Upper Bound is not Similar to Lower Bound

Not the answer you're looking for? Browse other questions tagged algorithm computer-science big-o notation big-theta or ask your own question.

50
Could anyone explain Big O versus Big Omega vs Big Theta?
1
Big theta is in between big o and big omega or it is both big o and big omega?
0
Time complexity: big-O, omega, teta. What are them?
5090
What is a plain English explanation of “Big O” notation?
366
Difference between Big-O and Little-O Notation
106
What is the difference between lower bound and tight bound?
52
Which is better: O(n log n) or O(n^2)
44
What is the Big O analysis of this algorithm?
5
Why isn't every algorithm O(1)?
3
Why O(n log n) is greater than O(n)?
See more linked questions

917
Big O, how do you calculate/approximate it?
106
What is the difference between lower bound and tight bound?
5090
What is a plain English explanation of “Big O” notation?
885
What does %w(array) mean?
1192
What are the differences between NP, NP-Complete and NP-Hard?
2300
What does O(log n) mean exactly?
1193
Easy interview question got harder: given numbers 1..100, find the missing number(s) given exactly k are missing