How necessary is it to search for a path to an image using the NSBundle method pathForResource when creating a UIImage using imageNamed? I see tutorial codes that just specifies the name of the image directly, and then code that goes the extra mile to find the path first.

In my experience, I've always just used the name directly and it's always worked fine. I assumed that it automatically knew how to find the image. How important or under what circumstances would it be necessary to do more than this?

Not at all ... is the answer to the original question:

How necessary is it to search for a path to an image using the NSBundle method pathForResource when creating a UIImage using imageNamed?

Not much .. is how correct the accepted answer from Zoul and the other one from Ranga are. To be fair: they are correct if you're talking about the application bundle directory structure, or for the (rare) case where the image is in a "blue" folder in Xcode (more on that later), but not for the most common cases

Anyway, on to the one true answer.

As usual I found this question while trying to find the answer myself. I never found the documentation or the other answers to this question satisfactory, so I decided to test.

My test details are all below, but let me summarize the results here. In short, when using imageNamed: to load your images, it depends where you put them:

The other important differences between these two methods:

So on with my tests.

What I did was create a simple UITableView app with 3 simple icon files, shown in the rows of the table using different methods. The icons are different in their location in the Xcode project structure. Note the emphasis on Xcode. The key to understanding the answer to the original question is that there are three totally different project directory structures in an iOS app: There's the one you see in the Xcode navigator, the one on the file system for the same project that you see in Finder (right click any item in the Xcode navigator and select "show in Finder") and, the one you seldom see, the "bundle" directory structure of the deployed app. You can see this last one in Finder too - by finding your app in ~/Library/Application Support/iPhone Simulator, and drilling down into the .app directory. I'll show you a picture of mine in a minute.

So in my app, I dragged all three icon png image files into Xcode in different ways:

Here's a shot of the choice that Xcode gives you:

And here's what my project structure looks like in Xcode: 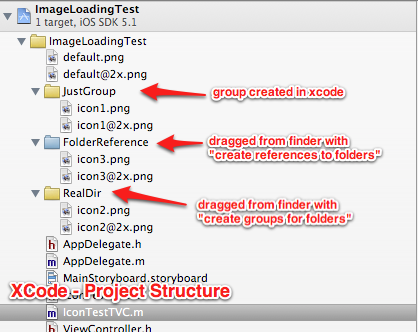 Now, in my app, I used two methods for loading each of the icons: UIImage imageNamed: and UIImage imageWithContentsOfFile. I created a bunch of rows in my table with the title of the each cell being the name of the group containing the icon: JustGroup, RealDir or FolderReference, plus the name of the method used: imageNamed vs fromFile (which I'm using as abbreviation of imageWithContentsOfFile)

The detail label of the cell (the fainter text under the title) shows the file or path name I gave to the method.

where "filePath" is the path you see in the table cell detail label. For imageNamed:, on the other hand, the filePath in the cell detail is passed verbatim.

And the row image is, naturally, the image that is loaded. So for the rows in the table that have no image, the image loading failed.

Here, in a nutshell, are the results. If you read nothing of this post, at least a glance at this image will tell you all you need to know. 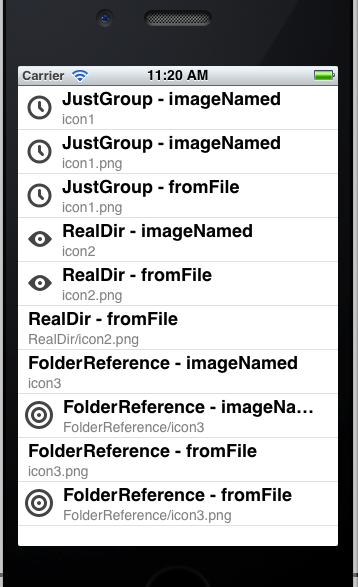 To clarify, here are my folder structures:

You saw my Xcode project navigator structure above, here is the file system directory underneath it: 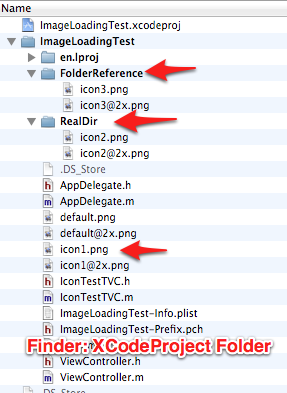 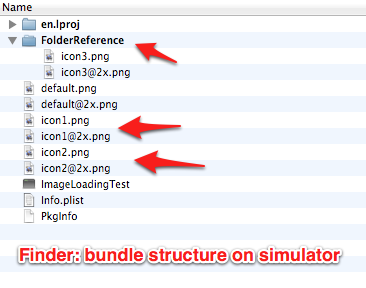 Note: I found this at this location on my Mac: you will find yours in a similar location - you might have to search a bit to find which ugly-GUID-named subdirectory contains your app.

I hope this helps. Testing, exploring and finally, describing it certainly helped me.

The docs say that “the method looks for an image with the specified name in the application’s main bundle”, so I’d say you can always use just the name. The only exception might be images stored inside subfolders, especially when you have foo/image.png and bar/image.png. I don’t know whether [UIImage imageNamed:@"foo/image"] would work, but it’s trivial to try.

(What’s a bit confusing in these cases is that the groups in the Xcode tree do not correspond to folders in the resulting app bundle. Their contents are smashed together to the root of the bundle, unless you use a blue folder reference instead of a regular group.)

In the ViewController viewDidLoad method added the code:

Ran the app on my phone, the image would not appear

Opened terminal and changed directory to my project, Wall1.png was not a group folder Images. Removed the png from the project, created a Images folder, moved Wall1.png into the folder. Added the existing file Wall1.png to the group Images.

If you create a group for your images, Xcode does not create a respective directory. Create one manually if you want to (I prefer to keep my images in a seperate folder). Dont specify the full path to your image file when using UIImage imageWithContentsOfFile.

Not the answer you're looking for? Browse other questions tagged iphone objective-c uiimage nsbundle or ask your own question.

0
How to simulate directory/grouping path in my Xcode project when loading image or other assets?
117
Dispelling the UIImage imageNamed: FUD
86
Why are there some blue folders in my Xcode project?
17
Create Blue Folders in Xcode
3
How to setup Cocos2d-x image resources properly
1
Not able to get UIImage object using imageNamed method
1
Invalid filename/path when getting JSON

117
Dispelling the UIImage imageNamed: FUD
10
iPhone SDK: subFolders inside the main bundle
419
The simplest way to resize an UIImage?
43
Is there a way to clear the cache used by UIImage class?
0
Check if file exists in resourses/project navigator
3
UIImage imageNamed does not display the image with xcode 4.4
1
Load an image from an asset catalog off the main thread?
2
UIImage Caching
432
iPad Multitasking support requires these orientations