Regex to change to sentence case

I'm using Notepad++ to do some text replacement in a 5453-row language file. The format of the file's rows is:

I need to convert the value to sentence case, except for the words "Here" and "Really" which are proper and should remain capitalized. As you can see, the case within the value is typically mixed to begin with.

I've worked on this for a little while. All I've got so far is:

which seems to at least select the proper strings. The replacement piece is where I'm struggling.

Regex replacement cannot execute function (like capitalization) on matches. You'd have to script that, e.g. in PHP or JavaScript.

I built myself a Web page called Text Utilities to do that sort of things:

The final function in the text area looks like this:

Maybe add some code to capitalize some words like "Really" and "Here".

In Notepad++ 6.0 or better (which comes with built-in PCRE support).

In Notepad++ you can use a plugin called PythonScript to do the job. If you install the plugin, create a new script like so: 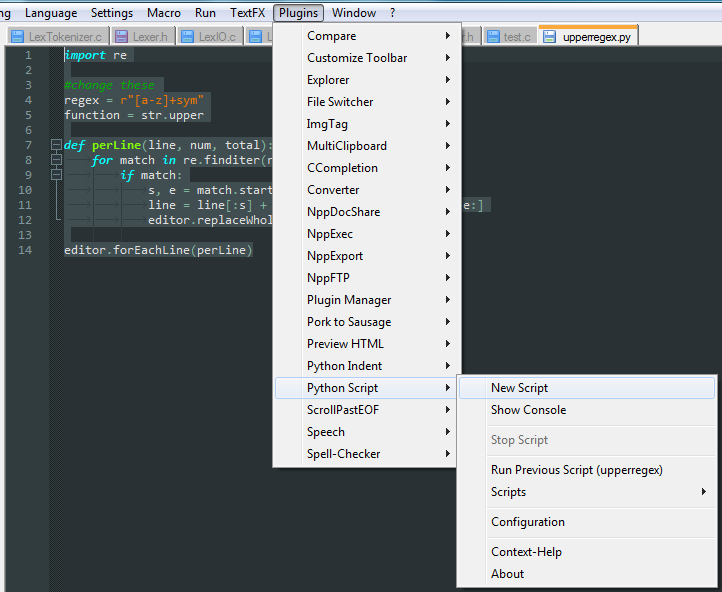 Then you can use the following script, replacing the regex and function variables as you see fit:

This particular example works by finding all the matches in a particular line, then applying the function each each match. If you need multiline support, the Python Script "Conext-Help" explains all the functions offered including pymlsearch/pymlreplace functions defined under the 'editor' object.

When you're ready to run your script, go to the file you want it to run on first, then go to "Scripts >" in the Python Script menu and run yours.

Note: while you will probably be able to use notepad++'s undo functionality if you mess up, it might be a good idea to put the text in another file first to verify it works.

P.S. You can 'find' and 'mark' every occurrence of a regular expression using notepad++'s built-in find dialog, and if you could select them all you could use TextFX's "Characters->UPPER CASE" functionality for this particular problem, but I'm not sure how to go from marked or found text to selected text. But, I thought I would post this in case anyone does...

Edit: In Notepad++ 6.0 or higher, you can use "PCRE (Perl Compatible Regular Expression) Search/Replace" (source: http://sourceforge.net/apps/mediawiki/notepad-plus/?title=Regular_Expressions) So this could have been solved using a regex like (. )([A-z])(.+) with a replacement argument like \1\U\2\3.

The questioner had a very specific case in mind. As a general "change to sentence case" in notepad++ the first regexp suggestion did not work properly for me. while not perfect, here is a tweaked version which was a big improvement on the original for my purposes :

You still have a problem with lower case nouns, names, dates, countries etc. but a good spellchecker can help with that.

Not the answer you're looking for? Browse other questions tagged regex notepad++ case or ask your own question.

26
VS Project References Broken On Case Sensitivity of GUID
27
Is it possible to replace to uppercase in Visual Studio?
2
Capitalizing the first letter after a tag
3
How To do this in Regex - code base alterations
1
How to convert text lines to variables?
0
Notepad++ make text between two fields all uppercase

573
Match all occurrences of a regex
905
A comprehensive regex for phone number validation
611
How to negate specific word in regex?
1355
RegEx match open tags except XHTML self-contained tags
561
OR is not supported with CASE Statement in SQL Server
359
Regex: Remove lines containing “help”, etc
279
Regex: ignore case sensitivity
0
Extracting sentences from text based on particular pattern
1
Regex in Notepad++ with Negative Lookahead with Question Mark Operator
0
Applying Title Case (aka Proper Case) as a find & replace using regex in Notepad++