What Instruments tools should I use to find out about my Monotouch app's memory usage?

I've been reading a lot about tracking memory usage in Instrument's but found little in combination with Monotouch.

There seem to be to three oposing claims here:

From what I've noticed:

So what is the correct answer? Is there exactly one?

EDIT: I attached two images. One showing memory usage in a stage in the middle of my app's life and the seconds one from way later. Both images reflect memory usage at the same point in the UI where nothing but two controllers are on screen. Maybe somebody can still comment what can be read from those number, especially the magic "Memory Tag 70". 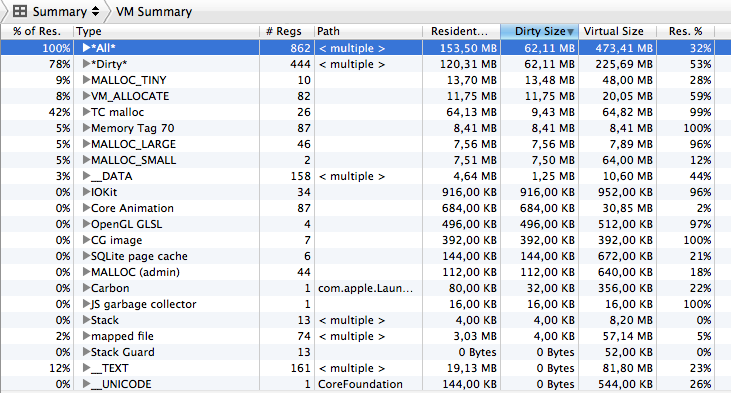 Instruments is somewhat of a black box, but here is how I think it is:

There seem to be to three opposing claims here:
1. Use the *Allocation*s utility of Instruments. The number of "live bytes" is the amount of physical memory used by the application.

2 . Use the Memory Monitor plugin. From the list of processes, pick your app and check the "Real memory" column. That's the amount of RAM currently in use.

3 . Use VM Tracker and make automatic snapshots. The "Dirty Size" if what you're after.

Correct. "Dirty Size" is what you're after - this is however closely related to "Real Mem", it's just "Real Mem" split into categories so you can easily see what's using the memory.

For the typical case of using a lot of memory due to leaking images, the process goes like this:
1. Verify with the Memory Monitor that your app really has a memory problem.
2. See in VM Tracker / "Dirty Size" that a lot of memory is used by image data (that's the magic "Memory Tag 70").
3. Use Allocations to find out where CGImages are created, see the corresponding stack trace and track down why those images aren't freed.

Each app is different though, so it's not possible to come up with a short recipe which works for all cases.

All these are explained above.

It could be your problem too :) It's impossible to tell without actually knowing where the memory goes.

You mean you're watching real memory grow while your app is doing absolutely nothing? If you're actually doing something in your app this is completely normal.

Not the answer you're looking for? Browse other questions tagged memory-management xamarin.ios instruments or ask your own question.

551
What is private bytes, virtual bytes, working set?
3
Why does MonoTouch cause lots of memory leaks (as reported by Instruments) even with very simple Apps?
5
What is "dirty" memory in Instruments?
52
How to profile memory usage & performance with Instruments?
31
XCode Instruments Allocations: Look at Live Bytes or Overall Bytes?
0
MonoTouch Memory Use High
3
iOS questions about Instruments tool, memory issue in my app
2
For iOS apps, how to use Instruments' Memory Monitor to graph an app's memory usage?
12
iOS memory usage increasing, can't find the culprit