What is the meaning of "cascading' in CSS?

What's the exact meaning of the term "Cascading" in CSS? I am getting different views, so I ask here. An example would help.

"Cascading" in this context means that because more than one stylesheet declaration could apply to a particular piece of HTML, there has to be a known way of determining which specific stylesheet rule applies to which piece of HTML.

The rule used is chosen by cascading down from the more general declarations to the specific rule required. The most specific declaration is chosen.

One rule tells your H3 tag to be red, another rule tells it to be green -- the rules are contradicting each other, who will win!? Stylesheet deathmatch!

OK maybe that's a slight exaggeration, but it's far more amenable to non-code, non-programming people who are just starting out than any notion of a cascade, or inheritance.

I do of course make sure to tell them that it's not a problem for the style sheets to be fighting each other, that's the way the language was designed.

Håkon Wium Lie (CSS co-creator) defines "cascade" in his PHD-thesis on CSS as "The process of combining several style sheets and resolving conflicts between them" https://www.wiumlie.no/2006/phd/

It's the order in which properties are applied on a particular element(s).

You have to think of it from the outside in. If you have a rule that that is on the body tag it will "cascade" through every child tag. If you put a rule on any tag inside the body it will adopt that rule, and so on. So the rule cascades through all the content unless interrupted by a rule from an embedded tag.

You can treat the CSS processing as a waterfall contains several cascades. Here are those cascades from top to bottom in order: (The lower can override the same property in the higher.)

See more in the spec

The cascading is to pick the right value from multiple origins. But it's different from sorting. Only something not in order need we to sort. But in CSS these origins have fixed precedence. And thus the pseudo-code might look like the follows:

From the pseudo-code you can see it quite looks like a waterfall of several cascades.

One clarification that may help. If you include two stylesheets and there's a rule with the same specificity in each, the one included last wins. I.E. the last in the cascade has the most influence.

(This is just a variation on having the two rules in the same sheet - the last one wins if all other things are equal.)

then the background will be green.

In choosing what CSS styles to apply to an HTML element, specificity overrides generality according to a cascading set of rules that settle conflicts between styles:

A CSS selector that matches a more specific combination of tags, classes, and/or IDs will take priority. Of the following examples, the first will take precedence over the second, regardless of their order of appearance in the CSS:

CSS stands for Cascading Style Sheet. By their very nature styles further down a cascading stylesheet override equivalent styles higher up (unless styles higher up are more specific). We can therefore set base styles at the beginning of a stylesheet, applicable to all versions of our design, and then override relevant sections with media queries further on in the document.

Cascade and Specificity what you need to know:

Every rule from style sheets participate in a 'war' that is similar to cascade. Cascade is a pretty rarely used word and that's why it's problematic to understand the 'C' in CSS.

What is a cascade?

Cascade word means waterfall. Not any waterfall. It's the one that has steps that consists of rocks. 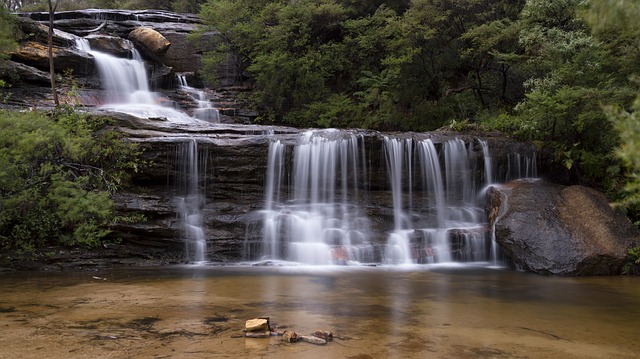 Now imagine that every step is representing a differently placed rule that can apply style to your HTML.

When the water falls from one rock to another 'downwards' then it's not possible to go back with water 'up'. Water has fallen and that's it.

Coming back to CSS world.

The simplified (there is more to that) order is:

'Cascade' algorithm chooses the 'step' that is the lowest as the most important. Because these are on the 'lowest' place of 'waterfall'. Whatever rule is below overrides what is above.

Let's say you have sample.html file.

Inside sample.html you have a link to external CSS file (step 2), where you put selector and a rule like below:

and in the same time in the head tag of sample.html, you put:

According to 'cascade' the lowest step is step nr 3.

That's why your paragraph is 'blue' not 'red'.

Why bother using 'cascade' word in this case that represents waterfall with rocks? Because when the water falls it TAKES everything with itself down to the bottom.

Why does it matter?

Because if you put inside sample.html in external CSS file also:

You will just change the color. Every other rule from 'steps' before are 'kept'. And that's the beauty in it.

It is a process which is used to resolve the conflicts in style sheet specification.

That is primely the conflict resolution process done according to the precedence mention in CSS.

Cascading is an algorithm which assigns weight to each style rule. When several rules apply, the one with the greatest weight takes precedence.

When one or more styles are applied to the same element.CSS performs a set of rules called cascading which evaluates the strength of Specificity of the two applied styles and determines the winner i.e the style rule which has more weight wins.if the two rules have same weight then the rule applied last wins.

would render the p at 14pt font because it's "closer" to the actual element (external style sheets loading from top of file to bottom of file). If you use a linked style sheet and then include some CSS in the head of your document after linking to the external CSS doc, the "in head" declaration would win because it's even closer to the element defined. This is only true of equally weighted selectors. Check out http://www.stuffandnonsense.co.uk/archives/css_specificity_wars.html for a good description of the weight of a given selector.

All that said, you could consider 'inheritance' as part of the cascade as well - for all practical purposes. Things "cascade" down from containing elements.

Not the answer you're looking for? Browse other questions tagged css terminology css-cascade or ask your own question.

-4
Why css is called cascading style sheet?
0
What is the meaning of “cascading” in Cascading Style Sheets?
20
In CSS, what is the difference between cascading and inheritance?
8
Why are styles invisible, and style tags not re-appendable after using insertRule of CSSOM
7
When using container in React-Boostrap my body's background-color is overwritten
2
Why is my second :nth-child selector taking priority?
3
Do media queries inherit values that are not specified within a media query?
2
How to prevent specific css style sheet from styling a specific html tag
3
Select an element only when it has a child with a specific class
3
Set font colors in CSS for links
See more linked questions

2242
What are MVP and MVC and what is the difference?
2324
What is reflection and why is it useful?
3299
What is dependency injection?
3508
Set cellpadding and cellspacing in CSS?
3594
Is there a CSS parent selector?
2293
What is JSONP, and why was it created?
4160
Change a HTML5 input's placeholder color with CSS
1683
Transitions on the CSS display property
2190
What's the difference between SCSS and Sass?
2974
Is it possible to apply CSS to half of a character?