Why is git push gerrit HEAD:refs/for/master used instead of git push origin master

I've just started using gerrit and I want to know why we need to do git push gerrit HEAD:refs/for/master instead of doing git push origin master

If I do git push origin master I get the error saying ! [remote rejected] master -> master (prohibited by Gerrit)

The documentation for Gerrit, in particular the "Push changes" section, explains that you push to the "magical refs/for/'branch' ref using any Git client tool".

The following image is taken from the Intro to Gerrit. When you push to Gerrit, you do git push gerrit HEAD:refs/for/<BRANCH>. This pushes your changes to the staging area (in the diagram, "Pending Changes"). Gerrit doesn't actually have a branch called <BRANCH>; it lies to the git client.

Internally, Gerrit has its own implementation for the Git and SSH stacks. This allows it to provide the "magical" refs/for/<BRANCH> refs.

When a push request is received to create a ref in one of these namespaces Gerrit performs its own logic to update the database, and then lies to the client about the result of the operation. A successful result causes the client to believe that Gerrit has created the ref, but in reality Gerrit hasn’t created the ref at all. [Link - Gerrit, "Gritty Details"]. 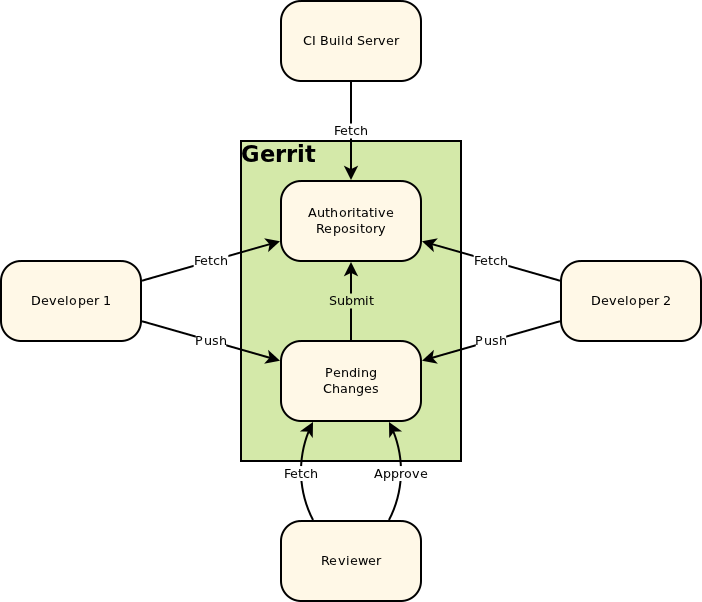 After a successful patch (i.e, the patch has been pushed to Gerrit, [putting it into the "Pending Changes" staging area], reviewed, and the review has passed), Gerrit pushes the change from the "Pending Changes" into the "Authoritative Repository", calculating which branch to push it into based on the magic it did when you pushed to refs/for/<BRANCH>. This way, successfully reviewed patches can be pulled directly from the correct branches of the Authoritative Repository.

In order to avoid having to fully specify the git push command you could alternatively modify your git config file:

Now you can simply:

This is according to Gerrit

Not the answer you're looking for? Browse other questions tagged git gerrit or ask your own question.

11
Why Gerrit is unable to create branch by itself?
2
What to do, when missed some key refs during push to Gerrit
1
Custom action for default push
2
How does Gerrit implement its ‘magical’ refs?
0
Why Gerrit is accepting pushes, it can't handle?
1
git repo config for multiple environments
0
How to push the first commit into a new remote git project?
1
Considering Git, what are the Git references in ref/for/?
1
How to push for Gerrit review via Git Extension?
0
Error encountered while fetching: Invalid redirect to different host Git with VS 2015
See more linked questions

2546
How do you clone a Git repository into a specific folder?
2211
Showing which files have changed between two revisions
2979
How to find and restore a deleted file in a Git repository
8050
How do I force “git pull” to overwrite local files?
4539
How to change the URI (URL) for a remote Git repository?
4785
How do I push a new local branch to a remote Git repository and track it too?
3226
Message 'src refspec master does not match any' when pushing commits in Git
1645
How can I reconcile detached HEAD with master/origin?
9392
How do I rename a local Git branch?
1489
Remove tracking branches no longer on remote