Since the keyboard is the interface we use to the computer, I've always thought touch typing should be something I should learn, but I've always been, well, lazy is the word. So, anyone recommend any good touch typing software?

It's easy enough to google, but I'ld like to hear recommendations.

Typing of the Dead!

It's a good few years old so you may have to hunt around, but it's a lot of fun and as well as the main game there are numerous minigames to practice specific areas you may be weak on. 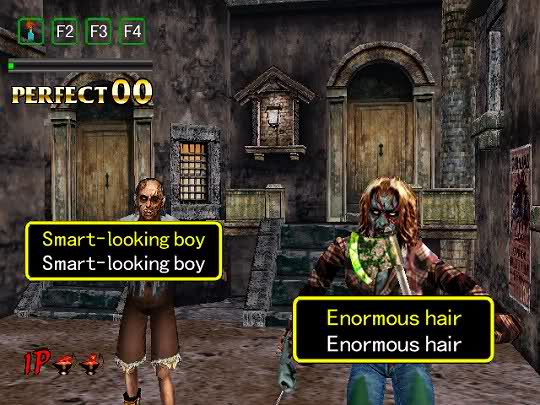 I trained my typing on GNU Typist. It comes with exercises for various languages and keyboard layouts, if you're so inclined.

One of the most fun typing programs I used is dvorak7min. It has a nastiness mode where for each typo you make, the cursor goes back by 1. So if you don't watch your typing, you'll be back to square 1….

If you want some motivation to learn to touch type read Steve Yegge's Blog rant:

Find a long document on the web, using Firefox

Type along with the document. Try it, it works.

Although not nearly as fun as Typing of the Dead!

I've been touchtyping since I was 10 years old (on a real typewriter at that!) but one thing that helped my sister learn touchtyping is hanging out in IRC channels. You want to be able to "talk" as fast as you can speak and that trained her in typing a lot faster.

I know it's a lame answer and not really a software solution or what, but it worked for a lot of people I know. :)

Try http://keybr.com/? It is a little different from the usual format of free typing tutors. If you create an account, it keeps track of your progress as well. No add-ware and no pop-ups, or other useless junk.

If you want to learn by getting thrown in the deep end... DasKeyboard ultimate will have you touch typing in no time :)

I use Rapid Typing to learn touch typing. It has excellent visuals and it's even somewhat relaxing to type.

About the recommendation to use the DasKeyboard, I just started using one today! But be aware that it makes a lot of noise. I was mortified how much noise it was making in my super quiet office filled with other people, who are engineers but mostly not developers. I asked the person across from me if it was too noisy. She hesitated for a fraction of a second before insisting it was fine, and when I said I would put it away she barely protested. So I packed it up. Maybe if you are just surrounded by other devs it would be OK. I'd love to hear of contrary experiences. I'm banging away from home right now though, as loud as possible, and loving it!

Oh, and you will definitely learn to touch type! Right now I have a picture of a labeled keyboard as my desktop image, but am referring to it less and less.

I have a really weird habitual way of typing where I use several fingers on my left hand but only one or two on the right. This has served me for years and apparently gives me 80+ words per minute, but it does seem an incredibly weird way to type. This is touch typing but not using the "standard" finger arrangement. While it's probably not a great idea to try and fix something that already works, I thought I'd try and relearn to type the proper way (left fingers on asdf and right fingers on jkl;).

I've been trying out Mavis Beacon and it seems alright, it slowly adds more and more letters to your repertoire allowing you to gain the muscle memory or whatever, and then focuses on speed. The "games" seem a little pointless (is this program designed for kids?), but I guess for someone who doesn't know where the keys are it does a good job showing you which fingers to use and where to move them. As I already knew where the keys are most of the program didn't really aid me. Once you know where the keys are you probably just want to practice typing out text and a program like that won't really aid any more than notepad apart from counting your words per minute and giving you something to type. I agree with Typing of the dead being pretty awesome though, and will definitely help with your speed once you've got the finger arrangement down.

Do all you touch typers use the standard finger arrangement or do you just do your own thing? I think I've come to the conclusion I'll just stick with what I know, it seems to work anyway.

For the sake of completeness, my wife used KP Typing Tutor, worked great.

I used the TTCoach plugin for Vim and have been very happy with it. It doesnt come with any exercises for numbers and symbols however, but it is easy to just make some text files yourself and write :TTCustom file.txt to use it for exercising.

I've been using TypeFaster. It's not pretty, but one nice feature is that it can load lessons in different keyboard layouts, like Colemak (layout files here) or Dvorak.

Not the answer you're looking for? Browse other questions tagged editor touch-typing or ask your own question.

207
What is the best way to force yourself to master vi?

7
Is it worth swapping Ctrl and Caps Lock for windows users that don't use Emacs
6
Language-agnostic properly-tabbing code editors for Linux?
4
Is there a better StringCollection editor for use in PropertyGrids?
1
Suggestions for a new IDE/text editor
6
Touch-typing capital letter identifiers
1
multiple searching in vim (i'm picky)
0
How do you type != when touch typing?