I thought an simple backup and restore would work. Though AWS RDS doesn't seem to have access to a file system so the sql scripts all seem to need a local file system on the source and destination server. I attempted a script following

Any Suggestions would be helpful.

download the free 'SQL Azure Migration Wizard' from CodePlex -- I did a short blog/screencast about this. Be sure to set the 'TO' setting in the wizard to the AWS DNS name and then use 'SQL Server 2008' and not 'SQL Azure'

And the also gave me an unofficial wink at the Azure database migration tool. Just use it to generate a script of your schema and or data and execute it against your RDS instance. Its a good tool. You will have to import the .bak into a non-RDS SQL server first to do this.

You will probably find that the Data-tier Applications BACPAC format will provide you with the most convenient solution. You can use Export to produce a file that contains both the database schema and data. Import will create a new database that is populated with data based on that file.

In contrast to the Backup and Restore operations, Export and Import do not require access to the database server's file system.

You can work with BACPAC files using SQL Server Management Studio or via the API in .Net, Powershell, MSBuild etc. 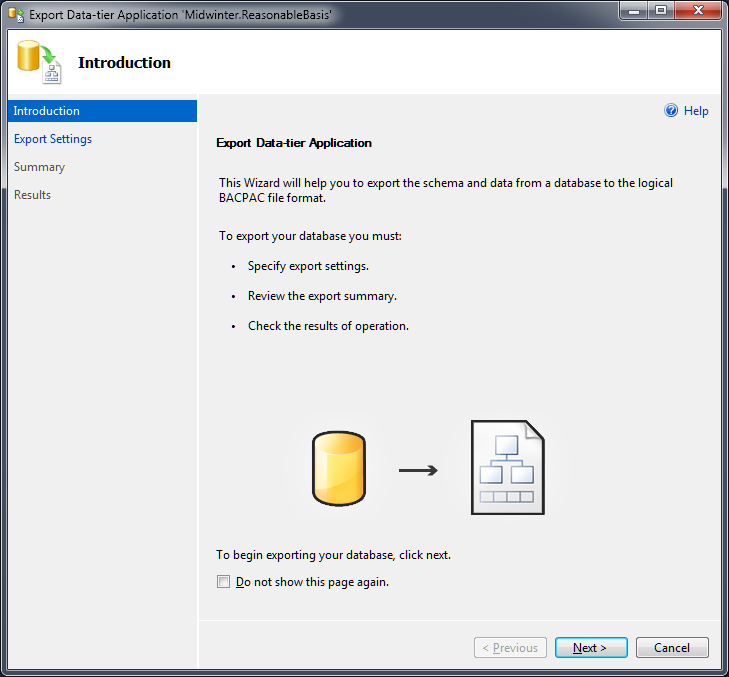 Note that there are issues using this method to Export and then Import from and to Amazon RDS. As a new database is created on RDS, the following two objects are created within it.

If you have a non-RDS instance of SQL Server handy, then you can Import the BACPAC to that instance, drop the objects above and then export the database to create a new BACPAC file. This one will not have any conflicts when you restore it to an RDS instance.

Otherwise, it is possible to work around this issue using the following steps.

Note: There is another, related problem with importing a BacPac to RDS using SQL Server Management Studio which I explain here.

I wrote up some step-by-step instructions on how to restore a .bak file to RDS using the SQL Azure Migration Tool based on Lynn's screencast. This is a much simpler method than the official instructions, and it worked well for several databases I migrated.

Use the export wizard in sql server management studio on your source database. Right click on the database > tasks > export data. There is a wizard that walks you through sending the whole database to a remote sql server.

There is a tool designed by AWS that will answer most, if not all, of your compatibility questions - the Schema Conversion Tool for SQL Server: https://docs.aws.amazon.com/SchemaConversionTool/latest/userguide/CHAP_Source.SQLServer.html

Because not all sql server database objects are supported by RDS, and even varies across sql server versions, the Assessment report will be well worth your time as well: https://docs.aws.amazon.com/SchemaConversionTool/latest/userguide/CHAP_AssessmentReport.html

The following article discussing how to Copy Database With Data – Generate T-SQL For Inserting Data From One Table to Another Table is what I needed.