How to tackle daylight savings using TimeZone in Java

I have to print the EST time in my Java application. I had set the time zone to EST using:

But when the daylight savings is being followed in this timezone, my code does not print the correct time (it prints 1 hour less).

How to make the code work to read the correct time always, irrespective of whether the daylight savings are being observed or not?

PS: I tried setting the timezone to EDT, but it doesn't solve the problem.

This is the problem to start with:

The 3-letter abbreviations should be wholeheartedly avoided in favour of TZDB zone IDs. EST is Eastern Standard Time - and Standard time never observes DST; it's not really a full time zone name. It's the name used for part of a time zone. (Unfortunately I haven't come across a good term for this "half time zone" concept.)

You want a full time zone name. For example, America/New_York is in the Eastern time zone:

Other answers are correct, especially the one by Jon Skeet, but outdated.

These old date-time classes have been supplanted by the java.time framework built into Java 8 and later.

If you simply want the current time in UTC, use the Instant class.

EST is not a time zone, as explained in the correct Answer by Jon Skeet. Such 3-4 letter codes are neither standardized nor unique, and further the confusion over Daylight Saving Time (DST). Use a proper time zone name in the "continent/region" format.

Use any such ZoneId object to get the current moment adjusted to a particular time zone to produce a ZonedDateTime object.

Adjust that ZonedDateTime into a different time zone by producing another ZonedDateTime object from the first. The java.time framework uses immutable objects rather than changing (mutating) existing objects. 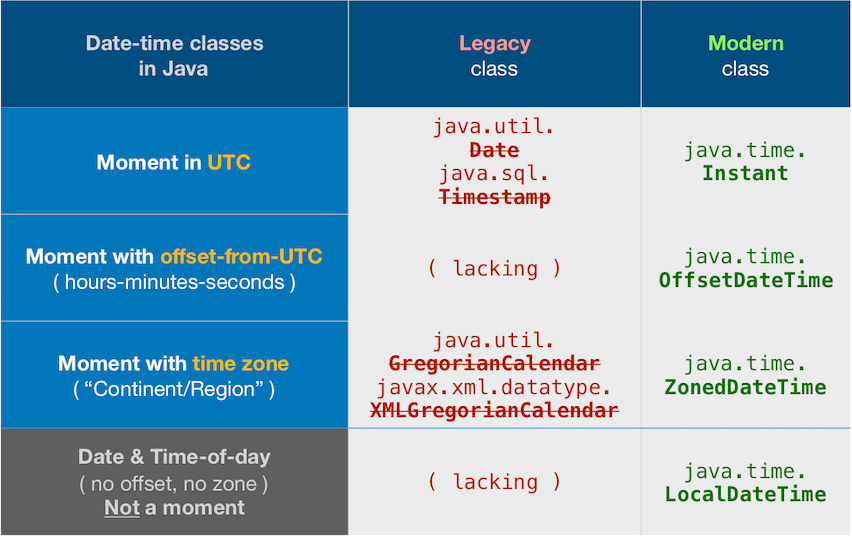 Instead of entering "EST" for the timezone you can enter "EST5EDT" as such. As you noted, just "EDT" does not work. This will account for the daylight savings time issue. The code line looks like this:

As per this answer:

In java, DateFormatter by default uses DST,To avoid day Light saving (DST) you need to manually do a trick,
first you have to get the DST offset i.e. for how many millisecond DST applied, for ex somewhere DST is also for 45 minutes and for some places it is for 30 min
but in most cases DST is of 1 hour
you have to use Timezone object and check with the date whether it is falling under DST or not and then you have to manually add offset of DST into it. for eg:

Implementing the TimeZone class to set the timezone to the Calendar takes care of the daylight savings.

Not the answer you're looking for? Browse other questions tagged java date calendar timezone or ask your own question.

0
DST while using EST time zone in java code
0
Java Date parsing wrongly adds an hour
-1
Conversion of GMT to EST gives time one hour less
0
Timezone getDSTSavings/observesDaylightTime equivalent in java 8
1
Java - How to know whether daylight saving is on
51
Difference between EST and America/New_York time zones
63
Determine Whether Daylight Savings Time (DST) is Active in Java for a Specified Date
5
Converting EDT time zone to GMT not working fine in java
8
Why is Calendar returning the wrong hour with the correct time-zone?
4
Convert Time from one time zone to another using Java 8 Time
See more linked questions

6811
Is Java “pass-by-reference” or “pass-by-value”?
3437
How do I efficiently iterate over each entry in a Java Map?
4157
How do you get a timestamp in JavaScript?
4205
How do I read / convert an InputStream into a String in Java?
3204
When to use LinkedList over ArrayList in Java?
3620
How do I generate random integers within a specific range in Java?
429
Create a Date with a set timezone without using a string representation
3121
How do I convert a String to an int in Java?
3326
How can I create a memory leak in Java?