Difference between numeric, float and decimal in SQL Server

What are the differences between numeric, float and decimal datatypes and which should be used in which situations?

For any kind of financial transaction (e.g. for salary field), which one is preferred and why? 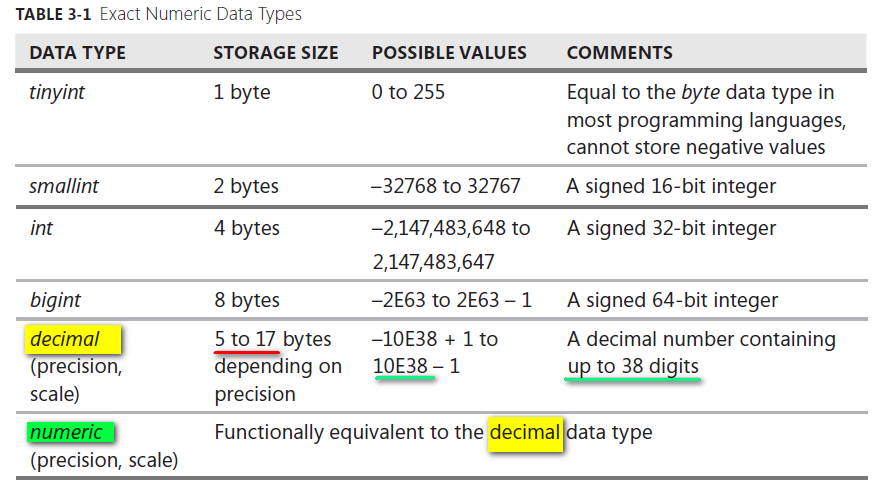 The behavior of float and real follows the IEEE 754 specification on approximate numeric data types. Because of the approximate nature of the float and real data types, do not use these data types when exact numeric behavior is required, such as in financial applications, in operations involving rounding, or in equality checks. Instead, use the integer, decimal, money, or smallmoney data types. Avoid using float or real columns in WHERE clause search conditions, especially the = and <> operators. It is best to limit float and real columns to > or < comparisons.

They Differ in Data Type Precedence

Decimal and Numeric are the same functionally but there is still data type precedence, which can be crucial in some cases.

The resulting data type is numeric because it takes data type precedence.

Not a complete answer, but a useful link:

The case for Decimal

What it the underlying need?

It arises from the fact that, ultimately, computers represent, internally, numbers in binary format. That leads, inevitably, to rounding errors.

The above ellipsis [...] means 'infinite'. If you look at it carefully, there is an infinite repeating pattern (='0011')

So, at some point the computer has to round that value. This leads to accumulation errors deriving from the repeated use of numbers that are inexactly stored.

Say that you want to store financial amounts (which are numbers that may have a fractional part). First of all, you cannot use integers obviously (integers don't have a fractional part). From a purely mathematical point of view, the natural tendency would be to use a float. But, in a computer, floats have the part of a number that is located after a decimal point - the "mantissa" - limited. That leads to rounding errors.

To overcome this, computers offer specific datatypes that limit the binary rounding error in computers for decimal numbers. These are the data type that should absolutely be used to represent financial amounts. These data types typically go by the name of Decimal. That's the case in C#, for example. Or, DECIMAL in most databases.

Float is Approximate-number data type, which means that not all values in the data type range can be represented exactly.

Decimal/Numeric is Fixed-Precision data type, which means that all the values in the data type range can be represented exactly with precision and scale. You can use decimal for money saving.

Decimal has a fixed precision while float has variable precision.

EDIT (failed to read entire question): Float(53) (aka real) is a double-precision (64-bit) floating point number in SQL Server. Regular Float is a single-precision (32-bit) floating point number. Double is a good combination of precision and simplicty for a lot of calculations. You can create a very high precision number with decimal -- up to 136-bit -- but you also have to be careful that you define your precision and scale correctly so that it can contain all your intermediate calculations to the necessary number of digits.

Be wary of the MONEY data type, it's of limited precision.

There is a lot of good information about it in the answers to this Stackoverflow question:

Should you choose the MONEY or DECIMAL(x,y) datatypes in SQL Server?

0
SUM Function Does Not Add Correctly
0
i would like to display only non rounded decimal value in sql access
0
Number missing decimals when inserted in SqlServer table via SqlParameter
2346
Difference between decimal, float and double in .NET?
524
Should you choose the MONEY or DECIMAL(x,y) datatypes in SQL Server?
187
Difference between float and decimal data type
133
Is there any difference between DECIMAL and NUMERIC in SQL Server?
54
Decimal vs Double Speed
51
what is numeric(18, 0) in sql server 2008 r2
38
AVG in Sql - Float number problem
See more linked questions