I understand that @Component annotation was introduced in spring 2.5 in order to get rid of xml bean definition by using classpath scanning.

@Bean was introduced in spring 3.0 and can be used with @Configuration in order to fully get rid of xml file and use java config instead.

Would it have been possible to re-use the @Component annotation instead of introducing @Bean annotation? My understanding is that the final goal is to create beans in both cases.

When should you use @Bean?

The @Bean annotation returns an object that spring should register as bean in application context. The body of the method bears the logic responsible for creating the instance.

@Component and @Bean do two quite different things, and shouldn't be confused.

@Component (and @Service and @Repository) are used to auto-detect and auto-configure beans using classpath scanning. There's an implicit one-to-one mapping between the annotated class and the bean (i.e. one bean per class). Control of wiring is quite limited with this approach, since it's purely declarative.

@Bean is used to explicitly declare a single bean, rather than letting Spring do it automatically as above. It decouples the declaration of the bean from the class definition, and lets you create and configure beans exactly how you choose.

To answer your question...

would it have been possible to re-use the @Component annotation instead of introducing @Bean annotation?

Sure, probably; but they chose not to, since the two are quite different. Spring's already confusing enough without muddying the waters further.

Let's consider I want specific implementation depending on some dynamic state. @Bean is perfect for that case.

However there is no way to do that with @Component.

Both approaches aim to register target type in Spring container.

I see a lot of answers and almost everywhere it's mentioned @Component is for autowiring where component is scanned, and @Bean is exactly declaring that bean to be used differently. Let me show how it's different.

First it's a method level annotation. Second you generally use it to configure beans in Java code (if you are not using xml configuration) and then call it from a class using the ApplicationContext.getBean method. Example:

It is the general way to annotate a bean and not a specialized bean. It is a class level annotation and is used to avoid all that configuration stuff through java or xml configuration.

That's it. It was just introduced to avoid all the configuration steps to instantiate and use that bean.

You can use @Bean to make an existing third-party class available to your Spring framework application context.

By using the @Bean annotation, you can wrap a third-party class (it may not have @Component and it may not use Spring), as a Spring bean. And then once it is wrapped using @Bean, it is as a singleton object and available in your Spring framework application context. You can now easily share/reuse this bean in your app using dependency injection and @Autowired.

By using @Bean in the code above, I'm explicitly declare a single bean because inside of the method, I'm explicitly creating the object using the new keyword. I'm also manually calling setter methods of the given class. So I can change the value of the prefix field. So this manual work is referred to as explicit creation. If I use the @Component for the same class, the bean registered in the Spring container will have default value for the prefix field.

On the other hand, when we annotate a class with @Component, no need for us to manually use the new keyword. It is handled automatically by Spring.

When you use the @Component tag, it's the same as having a POJO (Plain Old Java Object) with a vanilla bean declaration method (annotated with @Bean). For example, the following method 1 and 2 will give the same result.

with a bean for 'theNumber':

with the beans for both:

Method 2 allows you to keep bean declarations together, it's a bit more flexible etc. You may even want to add another non-vanilla SomeClass bean like the following:

You have two ways to generate beans. One is to create a class with an annotation @Component. The other is to create a method and annotate it with @Bean. For those classes containing method with @Bean should be annotated with @Configuration Once you run your spring project, the class with a @ComponentScan annotation would scan every class with @Component on it, and restore the instance of this class to the Ioc Container. Another thing the @ComponentScan would do is running the methods with @Bean on it and restore the return object to the Ioc Container as a bean. So when you need to decide which kind of beans you want to create depending upon current states, you need to use @Bean. You can write the logic and return the object you want. Another thing worth to mention is the name of the method with @Bean is the default name of bean.

Difference between Bean and Component: 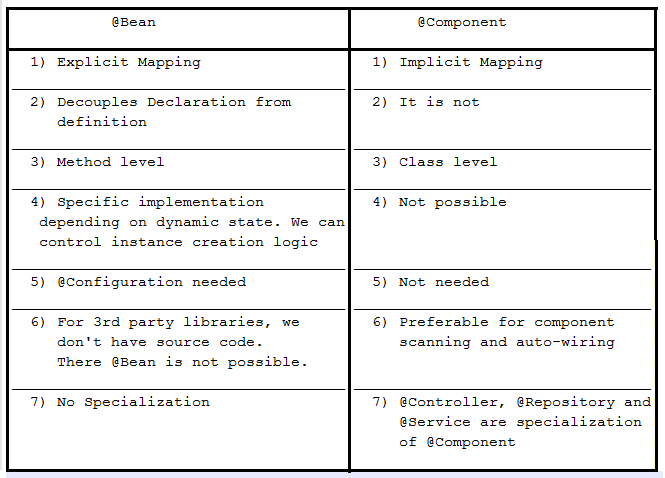 Moreover, you have total control on how create beans, where it is not enough the default Spring instantation.

They both indicate that the annotated class has one or more beans need to be registered to Spring-IOC-Container.

The class annotated by @Component, we call it Component of Spring. It is a concept that contains several beans.

2. About @Bean
@Bean is used to annotate the method of component-class(as mentioned above). It indicate the instance retured by the annotated method needs to be registered to Spring-IOC-Container.

3. Conclusion
The difference between them two is relatively obivious, they are used in different circumstances. The general usage is:

Additional Points from above answers

Let’s say we got a module which is shared in multiple apps and it contains a few services. Not all are needed for each app.

If use @Component on those service classes and the component scan in the application,

we might end up detecting more beans than necessary

In this case, you either had to adjust the filtering of the component scan or provide the configuration that even the unused beans can run. Otherwise, the application context won’t start.

In this case, it is better to work with @Bean annotation and only instantiate those beans,

which are required individually in each app

So, essentially, use @Bean for adding third-party classes to the context. And @Component if it is just inside your single application.

Spring supports multiple types annotations such as @Component, @Service, @Repository. All theses can be found under the org.springframework.stereotype package.

@Bean can be found under the org.springframework.context.annotation package.

When classes in our application are annotated with any of the above mentioned annotation then during project startup spring scan(using @ComponentScan) each class and inject the instance of the classes to the IOC container. Another thing the @ComponentScan would do is running the methods with @Bean on it and restore the return object to the Ioc Container as a bean.

If we mark a class with @Component or one of the other Stereotype annotations these classes will be auto-detected using classpath scanning. As long as these classes are in under our base package or Spring is aware of another package to scan, a new bean will be created for each of these classes.

There's an implicit one-to-one mapping between the annotated class and the bean (i.e. one bean per class). Control of wiring is quite limited with this approach since it's purely declarative. It is also important to note that the stereotype annotations are class level annotations.

@Bean is used to explicitly declare a single bean, rather than letting Spring do it automatically like we did with @Controller. It decouples the declaration of the bean from the class definition and lets you create and configure beans exactly how you choose. With @Bean you aren't placing this annotation at the class level. If you tried to do that you would get an invalid type error. The @Bean documentation defines it as:

Typically, @Bean methods are declared within @Configuration classes.We have a user class that we needed to instantiate and then create a bean using that instance. This is where I said earlier that we have a little more control over how the bean is defined.

As i mentioned earlier @Bean methods should be declared within @Configuration classes.

The name of the method is actually going to be the name of our bean. If we pull up the /beans endpoint in the actuator we can see the bean defined.

I hope that cleared up some things on when to use @Component and when to use @Bean. It can be a little confusing but as you start to write more applications it will become pretty natural.

Not the answer you're looking for? Browse other questions tagged java spring annotations autowired or ask your own question.

2366
What's the difference between @Component, @Repository & @Service annotations in Spring?
752
What is the difference between @Inject and @Autowired in Spring Framework? Which one to use under what condition?
146
Autowiring two beans implementing same interface - how to set default bean to autowire?
700
Why is my Spring @Autowired field null?
121
Calling a @Bean annotated method in Spring java configuration
1
Spring: Cannot get bean by using @Component and @Bean
1
Autowiring xml bean into @Configuration Class
37
Spring boot 2.1 bean override vs. Primary