I follow a development process where I create a new local branch for every new feature or story card. When finished I merge the branch into master and then push.

What tends to happen over time due to a combination of laziness or forgetfulness, is that I end up with a large list of local branches, some of which (such as spikes) may not have been merged.

Below is the output of the git branch --merged command.

All attempts to delete branches listed with grep -v \* (as per the answers below) result in errors:

The 'git branch -d' subcommand can delete more than one branch. So, simplifying @sblom's answer but adding a critical xargs:

or, further simplified to:

Importantly, as noted by @AndrewC, using git branch for scripting is discouraged. To avoid it use something like:

The simpler way to delete all branches but keeping others like "develop" and "master" is the following:

I found a nicer way in a comment on this issue on github:

Edit: Added no-color option and excluding of stable branch (add other branches as needed in your case)

Parsing the output of git branch is not recommended, and not a good answer for future readers on Stack Overflow.

To find out what the current branch is, casual/careless users may have scripted around git branch, which is wrong. We actively discourage against use of any Porcelain command, including git branch, in scripts, because the output from the command is subject to change to help human consumption use case.

Answers that suggest manually editing files in the .git directory (like .git/refs/heads) are similarly problematic (refs may be in .git/packed-refs instead, or Git may change their internal layout in the future).

Git provides the for-each-ref command to retrieve a list of branches.

Git 2.7.X will introduce the --merged option to so you could do something like the below to find and delete all branches merged into HEAD

Git 2.6.X and older, you will need to list all local branches and then test them individually to see if they have been merged (which will be significantly slower and slightly more complicated).

To delete every branch except the one that you currently have checked out:

I would recommend changing git branch -D $b to an echo $b the first few times to make sure that it deletes the branches that you intend.

The below command will delete all the local branches except master branch.

Just a note, I would upgrade to git 1.7.10. You may be getting answers here that won't work on your version. My guess is that you would have to prefix the branch name with refs/heads/.

CAUTION, proceed with the following only if you made a copy of your working folder and .git directory.

I sometimes just go ahead and delete the branches I don't want straight from .git/refs/heads. All these branches are text files that contain the 40 character sha-1 of the commit they point to. You will have extraneous information in your .git/config if you had specific tracking set up for any of them. You can delete those entries manually as well.

I found it easier to just use text editor and shell.

From Windows Command Line, delete all except the current checked out branch using:

If you want to delete all your local branches, here is the simple command:

Note: This will delete all the branches except the current checked out branch

I had a similar kind of situation and recently found the following command useful.

If you want to keep multiple branches, then

hope this helps someone.

Here's the Powershell solution for anyone running on a Windows machine

If you work with NodeJS, I wrote this command:

The command clears all of your local branch except master and current branch.

But what care deleting branch ; just remove the workspace and re clone it if it t is a small repository !!

If you don't need to go through Git itself, you can also delete heads under .git/refs/heads manually or programmatically. The following should work with minimal tweaking under Bash:

This will delete every local branch except your master branch. Since your upstream branches are stored under .git/refs/remotes, they will remain untouched.

If you are not using Bash, or want to recurse a lot of Git repositories at once, you can do something similar with GNU find:

The find solution is probably more portable, but pruning paths and filenames is tricky and potentially more error-prone.

None of the answers satisfied my needs fully, so here we go:

This will delete all local branches which are merged and starting with feature/, bugfix/ or hotfix/. Afterwards the upstream remote origin is pruned (you may have to enter a password).

Although this isn't a command line solution, I'm surprised the Git GUI hasn't been suggested yet.

I use the command line 99% of the time, but in this case its either far to slow (hence the original question), or you don't know what you are about to delete when resorting to some lengthy, but clever shell manipulation.

The UI solves this issue since you can quickly check off the branches you want removed, and be reminded of ones you want to keep, without having to type a command for every branch.

From the UI go to Branch --> Delete and Ctrl+Click the branches you want to delete so they are highlighted. If you want to be sure they are merged into a branch (such as dev), under Delete Only if Merged Into set Local Branch to dev. Otherwise, set it to Always to ignore this check. 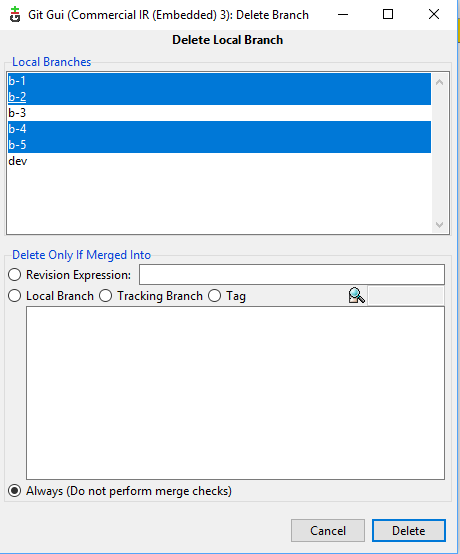 Based on a combination of a number of answers here - if you want to keep all branches that exist on remote but delete the rest, the following oneliner will do the trick:

To remove all your local git branches but keep main

If you want to keep master, develop and all remote branches. Delete all local branches which are not present on Github anymore.

1] It will delete remote refs that are no longer in use on the remote repository.

Warning - This deletes your own local branches as well. So do this when you have merged your branch and doing a cleanup after merge, delete.

For powershell, this will work:

I don't have grep or other unix on my box but this worked from VSCode's terminal:

I use the lowercase d so it won't delete unmerged branches.

I was also on master when I did it, so * master doesn't exist so it didn't attempt deleting master.

I recommend a more moderate answer. Many of the answers here use -D which is forced delete regardless of whether changes have been merged or not. Here is a one liner which leaves untouched the branches which have un-merged changes.

Or you can try other examples listed but just change the -D to -d. I know the OP asked how to delete, but in most use cases, its safer to use -d.

Deleting many local branches at once

For this purpose, you can use git-extras

The following script deletes branches. Use it and modify it at your own risk, etc. etc.

Based on the other answers in this question, I ended up writing a quick bash script for myself. I called it "gitbd" (git branch -D) but if you use it, you can rename it to whatever you want.

It will offer to delete any branches which match a pattern argument, if passed in, or all local branches when called with with no arguments. It will also give you a confirmation step, since, you know, we're deleting things, so that's nice.

It's kind of dumb - if there are no branches that match the pattern, it doesn't realize it.

Not the answer you're looking for? Browse other questions tagged git bash ubuntu version-control grep or ask your own question.