I need to serve my app through my app server at 8080, and my static files from a directory without touching the app server.

Now, with this config, everything is working fine. Note that the root directive is commented out.

If I activate root and deactivate the alias, it stops working. However, when I remove the trailing /static/ from root, it starts working again.

Can someone explain what's going on?

There is a very important difference between the root and the alias directives. This difference exists in the way the path specified in the root or the alias is processed.

Let's say we have the config

This is because the location part is appended to the path specified in the root. Hence, with root, the correct way is

On the other hand, with alias, the location part gets dropped. So for the config

the final path will correctly be formed as

In a way this makes sense. The alias just lets you define a new path to represent an existing "real" path. The location part is that new path, and so it gets replaced with the real path. Think of it as a symlink.

Root, on the other hand is not a new path, it contains some information that has to be collated with some other info to make the final path. And so, the location part is used, not dropped.

The case for trailing slash in alias

There is no definitive guideline about whether a trailing slash is mandatory per Nginx documentation, but a common observation by people here and elsewhere seems to indicate that it is.

A few more places have discussed this, not conclusively though.

A picture is worth a thousand words 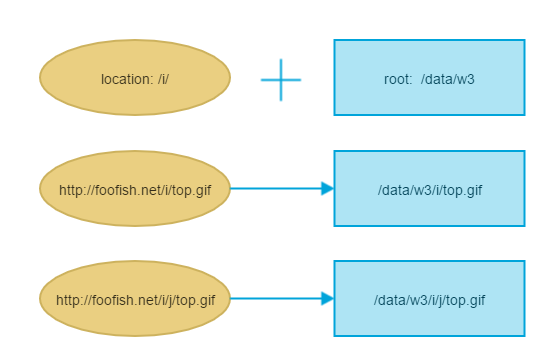 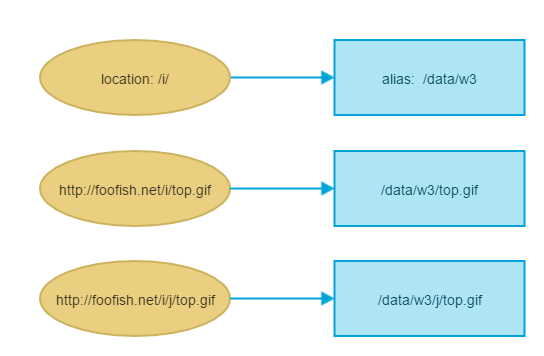 Nginx documentation advices it as well:
When location matches the last part of the directive’s value:

it is better to use the root directive instead:

and root directive will append $uri to the path.

Just a quick addendum to @good_computer's very helpful answer, I wanted to replace to root of the URL with a folder, but only if it matched a subfolder containing static files (which I wanted to retain as part of the path).

I got this to work using a regex.

They are two ways to map the request path to the final file path.

alias could only be used in location block, and it will override the outside root.

alias and root cannot be used in location block together.

Server block to live the static page on nginx.

Though my answer is not needed, But I think It is necessary to add this, root and alias works differently when is come to regex.

In this case the matched url going to add with root, nginx will search /var/www/static/my.png.

In other words on keeping this brief: in case of root, location argument specified is part of filesystem's path and URI . On the other hand — for alias directive argument of location statement is part of URI only

So, alias is a different name that maps certain URI to certain path in the filesystem, whereas root appends location argument to the root path given as argument to root directive.

Not the answer you're looking for? Browse other questions tagged nginx or ask your own question.

7
what's wrong with this configuration for nginx as reverse proxy for node.js?
16
nginx change root folder for specific url
15
nginx and trailing slash with proxy pass
25
Express - req.ip returns 127.0.0.1
2
Ngnix Jsession changed redirection issue
5
Wordpress constant redirect with nginx upstream
5
nginx + vault in docker reverse proxy
0
Frame ancestor is set to none even though it's not