How does one change the language of the command line interface of Git?

I’d like to change the language of git (to English) in my Linux installation without changing the language for other programs and couldn’t find the settings. How to do it?

Add these lines to your ~/.bashrc, ~/.bash_profile or ~/.zprofile to force git to display all messages in English:

The alias needs to override LC_ALL on some systems, when the environment variable LC_ALL is set, which has precedence over LANG. See the UNIX Specification - Environment Variables for further explanation.

If you just want to have one command in english instead you can just write LC_ALL=C before the command, for example:

The locale as used in C is English and always available without installing additional language packs
(see https://askubuntu.com/a/142814/34298)

To change it for the whole current bash session just enter

To change it for example to german enter

Adding this line solved the problem for me: Update: it seems like more components require a Locale as well now.

This gives git servers a chance to display remote error messages in the user's preferred language.

You have locale for git gui or other GUIs,

Before strings can be translated they first have to be marked for translation.

Git uses an internationalization interface that wraps the system's gettext library, so most of the advice in your gettext documentation (on GNU systems info gettext in a terminal) applies.

Git uses gettext to translate its most common interface messages into the user's language if translations are available and the locale is appropriately set.
Distributors can drop new PO files in po/ to add new translations.

So, if your update has mess up the translation, check what gettext uses:
See, for instance, "Locale Environment Variables"

A locale is composed of several locale categories, see Aspects. When a program looks up locale dependent values, it does this according to the following environment variables, in priority order:

Variables whose value is set but is empty are ignored in this lookup.

LANG is the normal environment variable for specifying a locale. As a user, you normally set this variable (unless some of the other variables have already been set by the system, in /etc/profile or similar initialization files).

LC_CTYPE, LC_NUMERIC, LC_TIME, LC_COLLATE, LC_MONETARY, LC_MESSAGES, and so on, are the environment variables meant to override LANG and affecting a single locale category only.
For example, assume you are a Swedish user in Spain, and you want your programs to handle numbers and dates according to Spanish conventions, and only the messages should be in Swedish. Then you could create a locale named ‘sv_ES’ or ‘sv_ES.UTF-8’ by use of the localedef program. But it is simpler, and achieves the same effect, to set the LANG variable to es_ES.UTF-8 and the LC_MESSAGES variable to sv_SE.UTF-8; these two locales come already preinstalled with the operating system.

LC_ALL is an environment variable that overrides all of these. It is typically used in scripts that run particular programs. For example, configure scripts generated by GNU autoconf use LC_ALL to make sure that the configuration tests don't operate in locale dependent ways.

Some systems, unfortunately, set LC_ALL in /etc/profile or in similar initialization files. As a user, you therefore have to unset this variable if you want to set LANG and optionally some of the other LC_xxx variables.

Run LC_MESSAGES=C git, not LC_ALL=C or LANG=C and no need delete or rename files.

GIT defaults to english if it cannot find the Locale language.

So if you want GIT to be in english, just sabotage the language file that it is running with. In my case it was always running with german (ie: de.msg).

If I deleted it or renamed the it, then it defaulted to english. 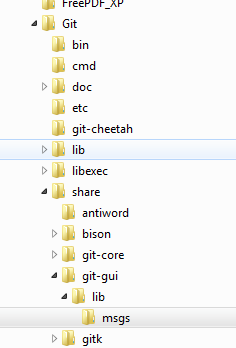 Here I renamed the file

As Bengt suggested : Add these lines to your ~/.bashrc or ~/.bash_profile to force git to display all messages in English: vim ~/.bashrc - for this profile (if you are user ubuntu and you edit this it will be only for this user); add this lines:

and after you close the file you need to write in shell:

to reload new settings or exit the terminal and connect again :)

Now your git already change the language. However, IF after your restart terminal and it not working anymore, you need to

it will make source ~/.bashrc run whenever you open the terminal

Not the answer you're looking for? Browse other questions tagged bash git localization environment-variables locale or ask your own question.

7
Git GUI: how to change the locale
1
temporarily change the language of git
2
Git terminal language changed after 'git checkout' to another branch
2
Where can I find a list of languages that Git is localized to?
3
Can git use a different locale on a remote server?
0
Git add old commit to current branch and do a PR

5728
How can I get the source directory of a Bash script from within the script itself?
7648
How to remove local (untracked) files from the current Git working tree
3538
View the change history of a file using Git versioning
24318
How do I undo the most recent local commits in Git?
2374
How to retrieve the hash for the current commit in Git?
8671
How do I force "git pull" to overwrite local files?
3875
Delete commits from a branch in Git
5951
Move the most recent commit(s) to a new branch with Git
5337
How to change the URI (URL) for a remote Git repository?
5163
How do I push a new local branch to a remote Git repository and track it too?