I'm having some trouble getting unicode to work for git-bash (on windows 7). I have tried many things without success. Although, I'm not quite sure what is responsible to for this so i might be working in the wrong direction.

It really seems this should be possible as the encoding for cmd.exe can be changed to unicode with 'chcp 65001'.

Here are some things I've tried (besides the obvious of looking through the configuration options in the GUI).

So, method 2 seems viable if that permission issue can be fixed. However, I'm open to pretty much any solution although i prefer if i can use Console2 (due mostly to it's nifty tab feature). Perhaps one solution would be to setup an SSH server and then use Putty/Kitty to connect to it, but that's just wrong! ; )

PS. Is there any official documentation for git-bash?

I faced the same issue in MSYS Git 2.8.0 and as it turned out it just needed changing the configuration.

The default configuration of Git Bash console in my system did not show Greek filenames.

The last line should display "Τα έγγραφά μου", the greek translation of "My Documents". In order to fix it I followed the below steps:

That's what actually solved it for me.

As CharlesB said in a comment, msysgit 1.7.10 handles unicode correctly. There are still a few issues but I can confirm that updating did solve the issue I was having.

WriteConsoleW seems to be the only way to reliably print unicode to the console (without weird code page conversions).

Add Unicode conversion functions to convert between Windows native UTF-16LE encoding to UTF-8 and back.

To support repositories with legacy-encoded file names, the UTF-8 to UTF-16 conversion function tries to create valid, unique file names even for invalid UTF-8 byte sequences, so that these repositories can be checked out without error.

It is likely to be a port of something already integrated in msysgit, but at least that means the Windows version of Git won't have to diverge/patch from the main Git repo source code in order to include those improvements.

Normally with each new version problems get better resolved. E.g. with the version from a year ago, I couldn't enter characters like "ä" into the shell, so it was not possible to write

To quickly test if UTF-8 is supported and at which level. A workaround is to write the byte-sequences octal:

Still issues I do have when I execute my windows php.exe binary to output text:

This does not give the the "ä" in the terminal, but it outputs "├ñ" instead. The workaround I have for that is, that I wrap the php command in a bash-script that processes the output through cat:

I must admit I miss deeper understanding why this is all the way it is. But I'm finally happy that I found a workaround to use php in git bash with UTF-8 support.

For me the solution was just to enable unicode support.
Docs: https://github.com/msysgit/msysgit/wiki/Git-for-Windows-Unicode-Support

I found the following steps helpful: 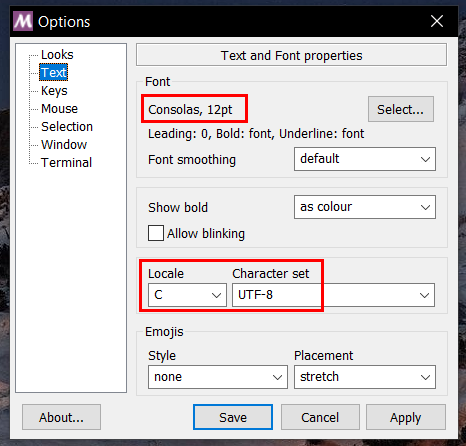 The problem with chcp 65001 is that there are bugs in the C runtime (MSVCRT) that make stdio calls return inconsistent results when run under code page 65001.

In practice, it does not work as expected at least on Windows 7, though, so we cannot use it in Git. Besides, if we overrode the code page, any process spawned from Git would inherit that code page (as opposed to the code page configured for the current user), which would quite possibly break e.g. diff or merge helpers.
So we really cannot override the code page.

In init_gettext_charset(), Git calls gettext's bind_textdomain_codeset() with the character set obtained via locale_charset(); Let's override that latter function to force the encoding to UTF-8 on native Windows.

In Git for Windows' SDK, there is a libcharset.h and therefore we define HAVE_LIBCHARSET_H in the MINGW-specific section in config.mak.uname, therefore we need to add the override before that conditionally-compiled code block.

Rather than simply defining locale_charset() to return the string "UTF-8", though, we are careful not to break LC_ALL=C: the ab/no-kwset patch series, for example, needs to have a way to prevent Git from expecting UTF-8-encoded input.

The ANSI variant assumes that the strings are encoded according to whatever is the current locale.
This is not what Git wants to use on Windows: we assume that char * variables point to strings encoded in UTF-8.

There is a pseudo UTF-8 locale on Windows, but it does not work as one might expect. In addition, if we overrode the user's locale, that would modify the behavior of programs spawned by Git (such as editors, difftools, etc), therefore we cannot use that pseudo locale.

Further, it is actually highly encouraged to use the Unicode versions instead of the ANSI versions, so let's do precisely that.

Note: when calling the Win32 API functions without any suffix, it depends whether the UNICODE constant is defined before the relevant headers are #include'd.
Without that constant, the ANSI variants are used.
Let's be explicit and avoid that ambiguity.

52
Is there a Windows command shell that will display Unicode characters?
27
Configure GPG for Git on Windows
4
Git bash chcp windows7 encoding issue
1
Handle utf-8 with bom in java
2
Strange characters in git show command
2
Why does Git Bash not display my PHP strings correctly?
-2
Git Error. When I run my code I get errors that shouldn't be there
0
Mocha - checkmark √ being printed as ΓêÜ on Git Bash
1
Atom can't use GitHub?
0
WAMP (3.0.6) PHP (7.0.1) CLI issues with UTF-8
See more linked questions

4209
How do I check if a directory exists in a Bash shell script?
5846
How do I get the directory where a Bash script is located from within the script itself?
3257
How to check if a string contains a substring in Bash
1435
Ignoring directories in Git repositories on Windows
2848
How can I check if a program exists from a Bash script?
3798
How do I tell if a file does not exist in Bash?
2632
How do I split a string on a delimiter in Bash?
2617
Extract filename and extension in Bash
3327
How to concatenate string variables in Bash
3213
Echo newline in Bash prints literal \n