Error: Could not find or load main class in intelliJ IDE

I'm a beginner in Java and am trying to run my code using IntelliJ that I just installed as my IDE with JDK 1.7. The following piece of code keeps does not even compile and keeps giving me the error:

Is there any change that i have to make in the compiler settings?? Or is it the code.

1) "Build" menu -> "Rebuild Project". Sometimes Intellij doesn't rewrite the classes because they already exist, this way you ask Intellij to rewrite everything.

2) "Run" menu -> "Edit configuration" -> delete the profile -> add back the profile ("Application" if it's a Java application), choose your main class from the "Main Class" dropdown menu.

For me the solution was to fix the output directory under project settings. Before I was using just "target" for the Project compiler output. Instead I updated it to have a full path e.g. D:\dev\sigplusjava2_68\target

If none of above answers didn't work for you, just close your intelliJ IDE and remove intelliJ IDE file and folder from root of project:

Then open project with intelliJ. It must work now.

I had this problem and I tried everything under the sun that I could think of and on this site.

None of my Java classes were being picked up after I pulled from a remote branch. All the classes had red Js by their names in the Project Hierarchy, not blue Cs.

In the end, I tried to follow this tutorial and a few steps in tried something not described and fixed the issue: https://www.jetbrains.com/help/idea/creating-and-managing-modules.html

Here's what I did:

For some reason, all my classes then had blue C's.

Someone with a better understanding of how IntelliJ and/or IDE's might be able to explain the phenomenon, but all I know is now it can see all the classes and more importantly the main one, and run.

Explicitly creating an out folder and then setting the output path to C:\Users\USERNAME\IdeaProjects\PROJECTNAME\out

seemed to work for me when just out, and expecting IntelliJ to make the folder wouldn't.

Also try having IntelliJ make you a new run configuration:

Find the previous one by clicking

Now, (IMPORTANT STEP) open the class containing your main method. This is probably easiest done by clicking on the class name in the left-hand side Project Pane.

Invalidate cache and restart your intellij, it worked for me. 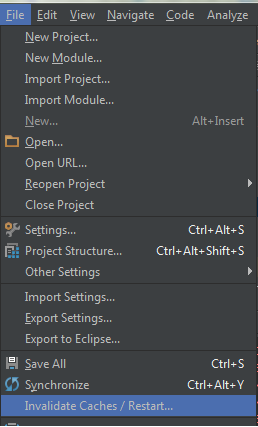 Check your class module : I have encountered this problem with intellij : I have a maven multi-module project, the problem is that i runing a class which not exist the module within the configuration, so my problem is fixed by setting the right module ("edit configuration" -> "use class of module")

may this help you

I know this was asked a while ago, but I was just stumbling over this issue and thought my findings might help others. As pointed out, the error message is basically a result of the out folder. That's because, when you're trying to run the program, it compiles the code first, and puts the compiled result to the out location, and then it tries to load the compiled code from the out location. If the compiled code is not in the location expected, you'll get the error.

The point I'm particularly wanting to share is that some times, the code is not compiled (built), even though your run configuration specifies "Build" in the "Before launch" section of the configuration panel.

When can this happen? One situation that can cause this to happen is if you're using modules and you manually delete the module out directory. For example, if I have a module named "foo", there should be a directory named foo under out/production. If you manually delete it, the build system may not know that it needs to be rebuilt.

Even worse, if you select Build | Build module 'foo', it still may not rebuild the module. If that's the case, you should select a file in the module, for example 'bar.java' and then select Build | Recompile 'bar.java'. Now the out directory out/production/foo should be restored.

Since IntelliJ typically knows about any changes going on, this surprised me, and took me a little time to figure out, so I thought I'd share.

I had to mark the "src" folder as "Sources". After restarting IntelliJ and rebuilding the project I could run the project without further issues (see screenshot). Edit: You can access the "Project Structure" tab via File->Project Structure or by pressing Ctrl+Shift+Alt+S.

So I guess using a package statement (eg. package org.me.mypackage;) on top of the class should fix it. 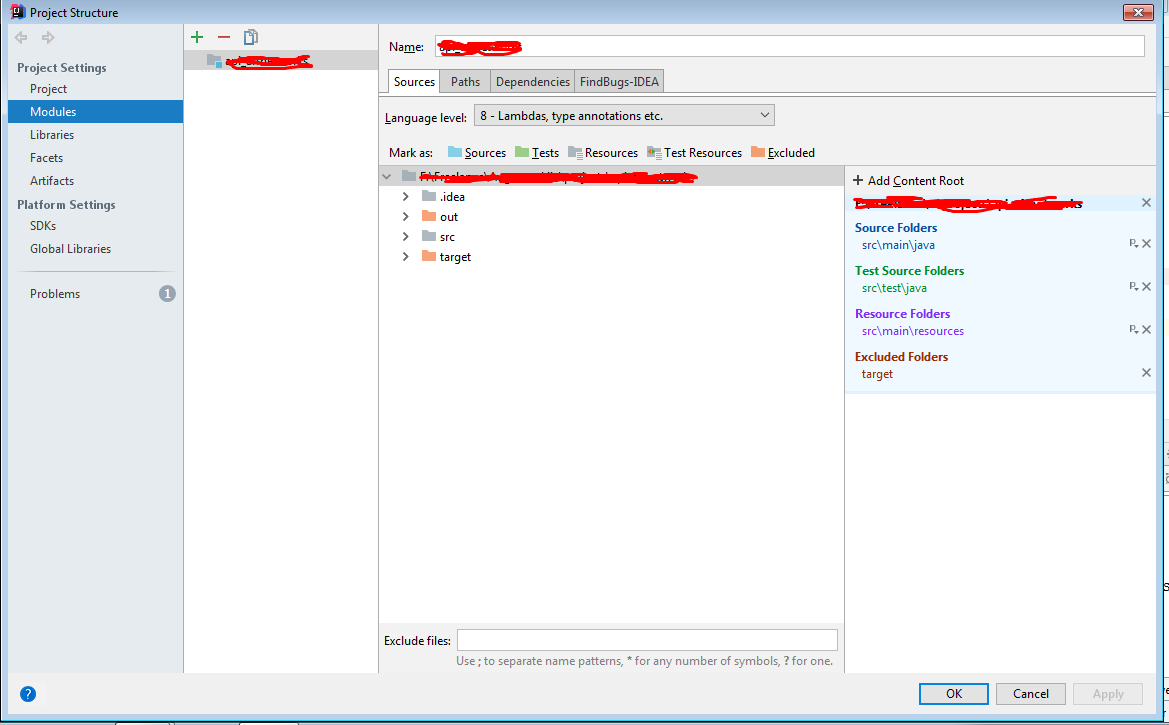 Mark the directory as a source directory. Opened via Ctrl+Shift+Alt+S

In my case the problem seemed to be related to upgrading IntelliJ. When I did this I overwrote the files from the old IntelliJ with the files from the new IntelliJ (2017 community to 2018 community). After that all of my projects were broken. I tried everything in this thread and none of them worked. I tried upgrading gradle to the latest version (4 to 4.8) and that didn't work. The only thing that worked for me was deleting the entire IntelliJ folder and reinstalling it. All of my projects worked after that.

For me - i tried few of the options above, did not work. Then i just renamed my Application class and that probably forced intelliJ to build a fresh jar and error message started to change. Then i renamed it back and it worked.

modules.xml with wrong content, I don't know what's matter with my IDEA.

I inherited a bunch of .JAVA files from elsewhere and couldn't figure out how to get them to work in any IDE. Ultimately I had to go to the command line where the Main.JAVA file was and run javac Main.java. This created a bunch of .CLASS files. The IDE's were then able to figure out what to do.

Elaborating on Brad Turek's solution... One of the default IntelliJ Java project templates expects a file called Main defining the class Main and main() method entry point. If the method is contained in another file (and class), change the Run configuration:

As others have noted you have to ReBuild using the new configuration. I am using a package, but that doesn't seem to make a difference IME. Hope this helps.

In my case in the module's build.gradle the mainClassName assignment must state the fully qualified class name, ie. as specified as the package name in the main class' source code file.

Just re-build the project (CTRL+F9) and double check (Edit Configurations) if you have a properly set Main class, and module (if any)

I have tried all the hacks suggested here - to no avail. At the end I have simply created a new Maven application and manually copied into it - one by one - the pom.xml and the java files and resources. It all works now. I am new to IntelliJ and totally unimpressed but how easy it is to get it into an unstable state.

I got this error when using Scala/SBT. IntelliJ could not find the main class, even though everything was set up correctly. My solution: delete the <user>/.sbt/<version>/plugins/target folder, then restart IntelliJ.

Simple solution is go to the backed folder in command line, where the root folder of the project. You should have SBT installed in your machine.

If you have sbt installed, please run the command "sbt package", this will recompile the project if it success, come back to the intelliJ it will work.

In my case, I had (relatively) long vm arguments configured. Converting these arguments (whenever possible) to environment variables fixed the issue for me

In my case, the application runs well when code initially was under /src directory under the project. Later I added /main/java directory after the /src, then "Could not find or load main class ..." error happened. At that time you couldn't add /src/main/java/YourMain.java to the run configuration. What I did was to remove the run configuration, then right click the project->Open Module Settings (or F4 after click the Project panel)->Project Settings->Modules delete (x) the old Content Root and + Add Content Root, choose /src/main/java. Rebuild the project and it runs.

You probably would have specified a wrong package and the package hierarchy would not be right. Look below

The ide would highlight the wrong path in that case.

In your Run Configuration be sure that your VM Options string is valid and doesn't have spaces!

share|improve this answer
answered Jan 17 at 15:53

Not the answer you're looking for? Browse other questions tagged java compiler-errors intellij-idea or ask your own question.

0
Loading the class only once
1
Java Inventory Program problems
565
SLF4J: Failed to load class “org.slf4j.impl.StaticLoggerBinder”
1311
What does “Could not find or load main class” mean?
168
How to view the list of compile errors in IntelliJ?
0
App is Stopping in Android Studio, but it compiles