When I use Git Bash (on Windows), I cannot run any executable without specifying its full path, although it is located in a folder which is in my PATH variable. Looks like bash doesn't recognize it. Why? Can I fix it?

Got it. As a Windows user, I'm used to type executable names without extensions. In my case, I wanted to execute a file called cup.bat. In a Windows shell, typing cup would be enough. Bash doesn't work this way, it wants the full name. Typing cup.bat solved the problem. (I wasn't able to run the file though, since apparently bash couldn't understand its contents)

One more reason to switch to posh-git..

Thanks @Tom for pointing me to the right direction.

Following @Daniel's comment and thanks to @Tom's answer, I found out that Git bash was indeed using the PATH but not the latest paths I recently installed. To work around this problem, I added a file in my home (windows) directory named:

because I was installing Go and this path contained the executable go.exe Now Git bash was able to recognize the command:

Perhaps just a system reboot would have been enough in my case, but I'm happy that this solution work in any case.

While you are installing Git, you can select the option shown below, it'll help you to set the path automatically. 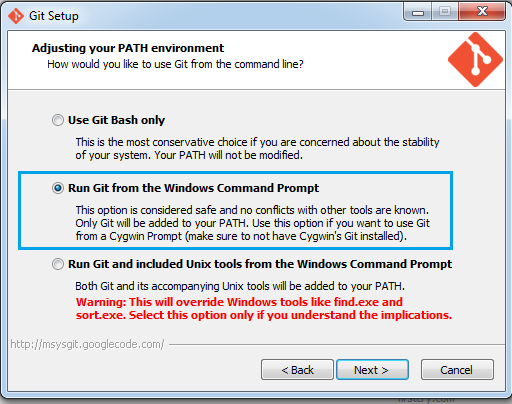 Its worked out for me :)

Restart the computer after has added new value to PATH.

Create a file in C:\Users\USERNAME which is called config.bashrc, containing:

Now move the file on the command line to the correct location:

In case your git-bash's PATH presents but not latest and you don't want a reboot but regenerate your PATHs, you can try the following:

Note: This doesn't work with all Windows versions, and open cmd.exe anywhere other than the Start Menu or Desktop context menu may not work, tested with my 4 computers and 3 of them works. I didn't figure out why this works, but since the PATH environment variable is generated automatically when I login and logout, I'd not to mess up that variable with variable concatenation.

Old question but it can help someone else.

That is it! git bash loaded the new PATH value correctly.

I can confirm that restarting the system will make sure that the PATH set in the environment variable in windows is picked up by git and there is no other automatic way. 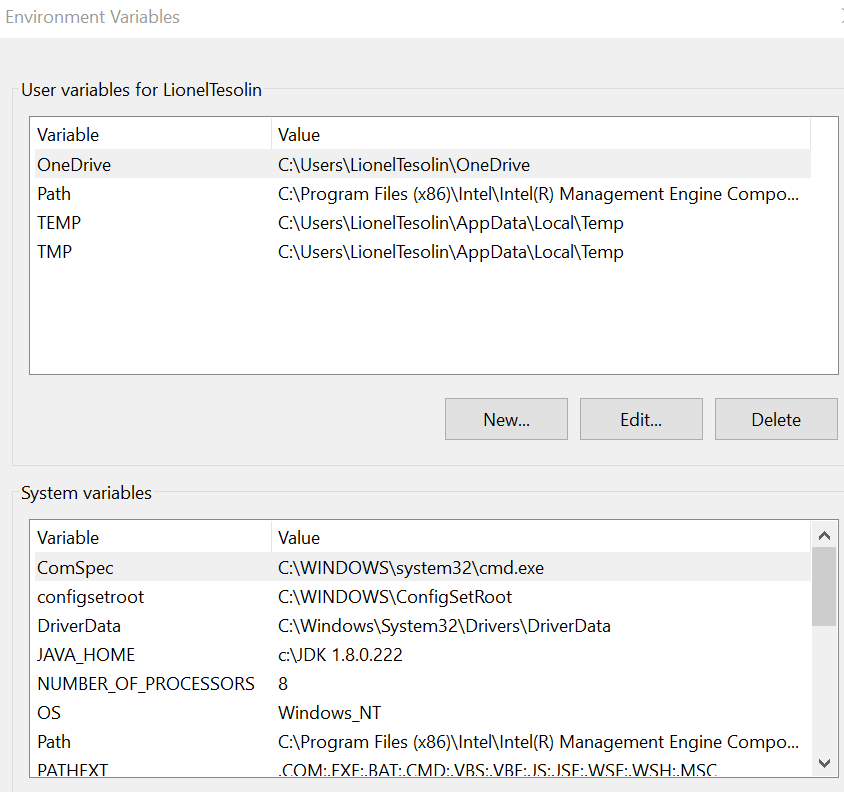 as said in a previous answer, check with the command env|grep PATH to see which one you are using and update your variable accordingly. BTW, no need to reboot the system. Just close and reopen the git bash

It seems the root cause here is Git Bash not able to always parse the variable %USERPROFILE% correctly. Instead of making it relative to C:\Users\\ it gets the value C:\Windows\System 32\systemprofile\ After changing this to a fully qualified address, it Works, and even if I set it back afterwards, Git Bash still has the correct PATH for some reason.

I meet this problem when I try to use mingw to compile the xgboost lib in Win10. Finally I found the solution.

Create a file named as .bashrc in your home directory (usually the C:\Users\username). Then add the path to it. Remember to use quotes if your path contains blank, and remember to use /c/ instead of C:/

For me the most convenient was to: 1) Create directory "bin" in the root of C: drive 2) Add "C:/bin;" to PATH in "My Computer -> Properties -> Environemtal Variables"

Don't escape (\) special characters when editing/adding to your $PATH variable. For example, an application directory in program files would look like: PATH=$PATH:/c/Program Files (x86)/random/application

I've run into a stupid mistake on my part. I had a systems wide and a user variable path set for my golang workspace on my windows 10 machine. When I removed the redundant systems variable pathway and logged off and back on, I was able to call .exe files in bash and call go env with success.

Although OP has been answered this is another problem that could keep bash from seeing your pathways. I just tested bash again with this problem and it does seem to give a conflict of some sort that blocks bash from following either of the paths.

In my case It happened while installing heroku cli and git bash, Here is what i did to work.

got to this location

and delete the file in my case heroku folder. So I deleded folder and run cmd. It is working

let me explain with an example docker won't work directly on the git bash terminal, for such apps MSYS is converting it origin path. for such issues you might need to tell your terminal ignore path conversion using command MSYS_NO_PATHCONV=1 and proceed with your actual execution command, say for example docker --help should be like below

Use Case - 3 : let me explain with an example az cli, ideally az cli install in windows as az.cmd which is added to system/user path. on windows operating system either powershell or command prompt recognize az.cmd as az but git bash won't understand it - so you have use alias to avoid the confusion say alias az='az.cmd' and then execute az --help will work for you

For those of you who have tried all the above mentioned methods including Windows system env. variables, .bashrc, .bashprofile, etc. AND can see the correct path in 'echo $PATH' ... I may have a solution for you.

My script runs fine but was throwing 'command not found' or 'No directory found' errors even though, as far as I can tell, the paths were flush. So, if you suppress those errors (might have to also add 'set +e'), than it works properly.

and it works now!

75
Why can't Git Bash run my executable?
26
Bash: Python3: command not found (Windows, discord.py)
13
'ionic' is not recognized as an internal or external command
20
Can I use gcloud in Git Bash on Windows?
23
node-sass installation issue on windows 10
13
Python 3 won't run from the Git Bash command line
8
How can i make gitbash find the javac command?
5
adb: command not found in Git Bash
0
Git Error: Couldn't find program: u'bash'
2
Git Bash does not execute command included in path
See more linked questions

4278
How do I check if a directory exists or not in a Bash shell script?
5978
How do I get the directory where a Bash script is located from within the script itself?
3344
How to check if a string contains a substring in Bash
2941
How can I check if a program exists from a Bash script?
3842
How do I tell if a file does not exist in Bash?
2684
Extract filename and extension in Bash
3399
How to concatenate string variables in Bash
3297
Echo newline in Bash prints literal \n
351
Python not working in the command line of git bash