I'm looking for a Java pattern for making a nested sequence of non-blocking method calls. In my case, some client code needs to asynchronously invoke a service to perform some use case, and each step of that use case must itself be performed asynchronously (for reasons outside the scope of this question). Imagine I have existing interfaces as follows:

There are various paired implementations of the Request and Response interfaces, namely RequestA + ResponseA (given by the client), RequestB + ResponseB (used internally by the service), etc. 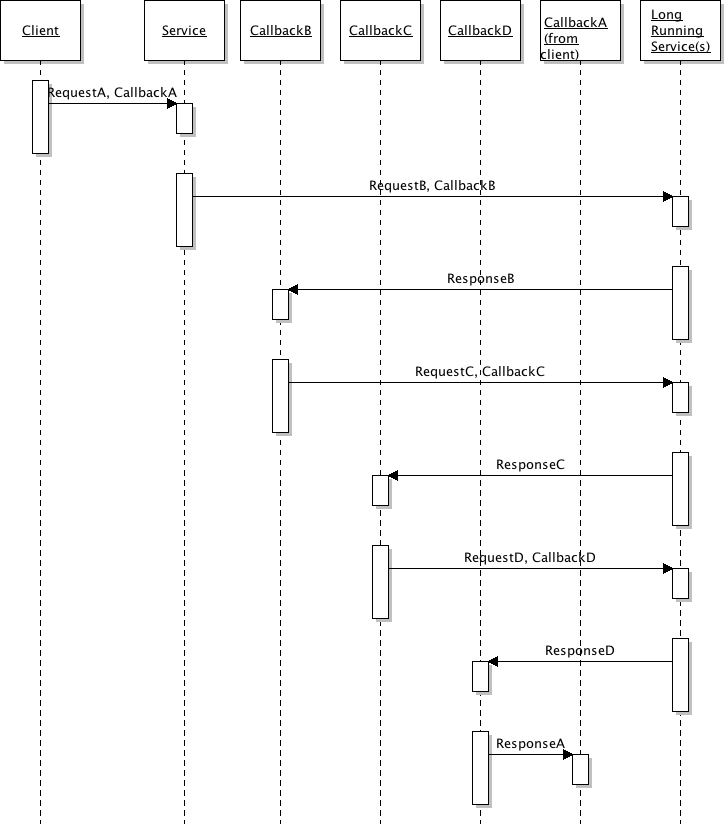 In between the receipt of each response and the sending of the next request, some additional processing needs to happen (e.g. based on values in any of the previous requests or responses).

So far I've tried two approaches to coding this in Java:

Is there some pattern to make this code more readable? For example, could I express the service method as a list of self-contained operations that are executed in sequence by some framework class that takes care of the nesting?

Set up a list of "operations" (perhaps Futures?), for which the setup should be pretty clear and readable. Then upon receiving each response, the next operation should be invoked.

With a little imagination, this sounds like the chain of responsibility. Here's some pseudocode for what I'm imagining:

In my opinion, the most natural way to model this kind of problem is with Future<V>.

So instead of using a callback, just return a "thunk": a Future<Response> that represents the response that will be available at some point in the future.

Then you can either model subsequent steps as things like Future<ResponseB> step2(Future<ResponseA>), or use ListenableFuture<V> from Guava. Then you can use Futures.transform() or one of its overloads to chain your functions in a natural way, but while still preserving the asynchronous nature.

If used in this way, Future<V> behaves like a monad (in fact, I think it may qualify as one, although I'm not sure off the top of my head), and so the whole process feels a bit like IO in Haskell as performed via the IO monad.

You can use actor computing model. In your case, the client, services, and callbacks [B-D] all can be represented as actors.

There are many actor libraries for java. Most of them, however, are heavyweight, so I wrote a compact and extendable one: df4j. It considers actor model as a specific case of more general dataflow computing model and, as a result, allows user to create new types of actors, to optimally fit user's requirements.

I am not sure if I get you question correctly. If you want to invoke a service and on its completion result need to be passed to other object which can continue processing using result. You can look at using Composite and Observer to achive this.

23
Promises for Android?
16
Executing Dependent tasks in parallel in Java
1
Scala's actor, what is the java equivalent? tradeoffs?

4193
What are the differences between a HashMap and a Hashtable in Java?
7534
Is Java "pass-by-reference" or "pass-by-value"?
2013
Java inner class and static nested class
4317
Avoiding NullPointerException in Java
4563
How do I read / convert an InputStream into a String in Java?
3968
How do I generate random integers within a specific range in Java?
1979
Difference between static class and singleton pattern?
3621
How can I create a memory leak in Java?
3937
Proper use cases for Android UserManager.isUserAGoat()?