This is related to version control, in a parallel modification situation where we do not know the exact timing of changes, so we assume that we receive two modified versions of a file at the same time. I simplify the problem:

I have a string S, with two modified versions, called T and U. I can see the differences between S and T using diff. Let's call the patch made out of T over S, as PT. The same for U, we will have PU. Now, I want to merge PT and PU into one single patch, in a safe way, being able to detect the conflicts between PT and PU at a "word" level, not the typical programming line level.

1- Is there such an algorithm to merge two patches?

2- How can I detect the conflicts between T and U?

3- What's a common policy for dealing with conflicts? to me, one solution is to always choose the changes from one of the versions, say T, in case of a conflict.

Are there any tools out there to do what I am looking for?

There is no word-level conflict resolution tools that I can think of. You always compare lines.

You could write a custom driver for your file type. I believe this is done through git attributes. Here you could do what ever you like if the merge is a non-fast-forward merge.

I am not aware of any implementation that does this, however you can get good help from using a merge tool that detects and shows differences within the line. KDiff3 is such a tool. In the following example you want to merge both the unsigned and int n changes. This is done by manually editing the merge output, but the tool makes this operation very simple (to the point that the only hard part is to understand the code changes). 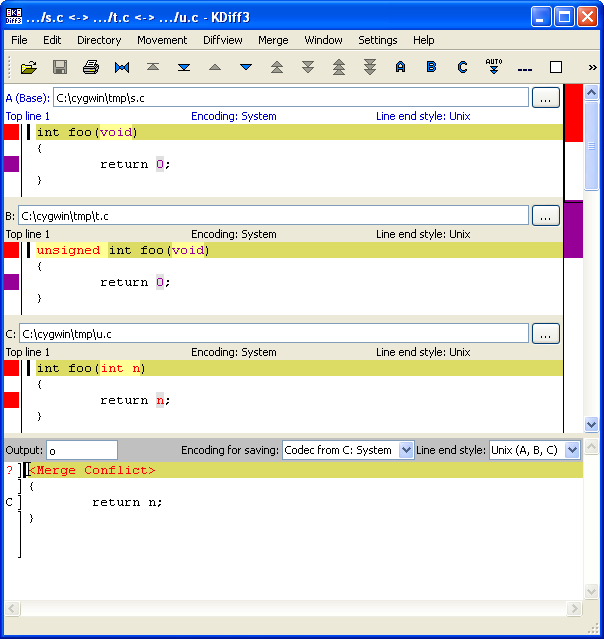 Not the answer you're looking for? Browse other questions tagged git version-control diff patch merge-conflict-resolution or ask your own question.

3035
I ran into a merge conflict. How do I abort the merge?
5229
How do I resolve merge conflicts in a Git repository?
1676
How can I selectively merge or pick changes from another branch in Git?
1026
Git workflow and rebase vs merge questions
2105
When do you use Git rebase instead of Git merge?
2010
How do you merge two Git repositories?
4628
Undo a Git merge that hasn't been pushed yet
1984
How to compare files from two different branches
2523
How do I safely merge a Git branch into master?
3189
Git refusing to merge unrelated histories on rebase