I have managed to get spyder installed and functioning on my mac but I want to add in a few modules that it doesn't include by default (mahotas and pymorph).

I installed both via easy_install in the terminal and both seemed to install without any error messages. Running python from a terminal and using import mahotas and import pymorph works just fine without error messages. However, when I run the same lines from a script within spyder I get the following error:

All I'm trying to do right now is run the import lines, that's it. I can't seem to find anything about this. I'm guessing that spyder uses a separate install of python and that installing modules via the terminal installs them only to the system version of python. How do I add them to spyder?

Ok, no one has answered this yet but I managed to figure it out and get it working after also posting on the spyder discussion boards. For any libraries that you want to add that aren't included in the default search path of spyder, you need to go into Tools and add a path to each library via the PYTHONPATH manager. You'll then need to update the module names list from the same menu and restart spyder before the changes take effect.

Using ! on the IPython console within spyder allows you to use pip. So, in the example, you could do:

Note, this is also available (though perhaps unreliably) on the Python console for Spyder versions before ~2.3.3. Thanks to @CarlosCordoba for this clarification.

If you are using Spyder in the Anaconda package...

In the IPython Console, use

This works locally too.

Note: the ! is required when using IPython console from within Spyder.

just use '!' before the pip command in spyder terminal and it will be fine

I faced the same problem when trying to add the seaborn module in Spyder. I installed seaborn into my anaconda directory in ubuntu 14.04. The seaborn module would load if I added the entire anaconda/lib/python2.7/site-packages/ directory which contained the 'seaborn' and seaborn-0.5.1-py2.7.egg-info folders. The problem was this anaconda site-packages folder also contained many other modules which Spyder did not like.

My solution: I created a new directory in my personal Home folder that I named 'spyderlibs' where I placed seaborn and seaborn-0.5.1-py2.7.egg-info folders. Adding my new spyderlib directory in Spyder's PYTHONPATH manager worked!

You can add the Standard Installation location to the PYTHONPATH manager. This way you don't need to add a specific path for each module. Only to update module names.

On Unix this location is usually:

But you need to run that command in the anaconda terminal of your environment. For example:

if the version are different make it identical from "Tools>Preferences>Python interpreter> "manage the python path where your libraries are installed.

Click on the Synchronize button, and then restart the kernel and your program should work 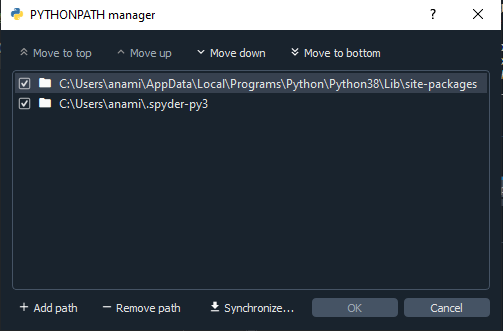 This is assuming a Conda Environment. At a high level, what worked for me was simply configuring my Conda path in Spyder. Here is how I did it:

First, determine the path your env exists at

For Spyder to be able to read your packages, do the following within Spyder.

I personally didn't need to restart my IDE, but you may need to.

This worked for my purpose done within the Spyder Console

Note: you may need to restart the kernel to use updated packages.

PackagesNotFoundError: The following packages are not available from current channels:

To search for alternate channels that may provide the conda package you're looking for, navigate to

and use the search bar at the top of the page.

Not the answer you're looking for? Browse other questions tagged python import module easy-install spyder or ask your own question.

3
Spyder doesn't recognise my library, ImportError: No module named 'numdifftools'
0
I need to use the scikit-image module for my project, but it always gives the error "No module named 'skimage'"
0
How install a module in spyder
13
ImportError: No module named lxml - Even though LXML Is installed
7
how to get spyder's python recognize external packages on MacOS X?
-1
Python Spyder 2.2.5 error installing pyodbc
2
Torch imports in python in terminal, but not in spyder
2
No module error when running python script from command prompt
2
modulenotfound Python 3.6.5 , Spyder 3.2.8
0
ModuleNotFoundError: No module named 'yfinance' - Importing Yahoo finance & Financials to Python
See more linked questions

3547
How do I get the current time?
1008
How do I unload (reload) a Python module?
3326
How can I add new keys to a dictionary?
3246
How do I concatenate two lists in Python?
3589
Does Python have a string 'contains' substring method?
0
Importerror: cannot import name Split
232
pytest cannot import module while python can