How to create directional light shadow in Three.JS?

Is it possible to create shadows from a DirectionalLight?

If I use SpotLight then I see a shadow, but if I use DirectionalLight it doesn't work.

Be aware that shadow maps are scale dependent. I'm working on a scene where the unit distance represents one metre, and my objects are around 0.4 metres large. This is quite small by Three.js standards. If you have this situation too, then you can take a few important steps:

Let's look at how to do this.

Be sure to turn on the debug rendering per light via CameraHelper:

Or in older versions of the Three.js:

This will show you the volume over which the shadow is being calculated. Here is an example of what that might look like: 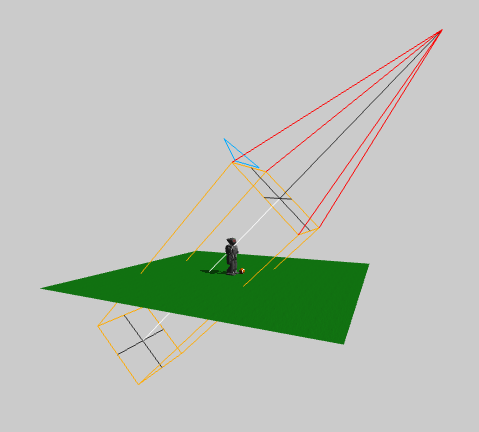 Notice the near and far planes (with black crosses), and the top/left/bottom/right of the shadow camera (outer walls of the yellow box.) You want this box to be tight around whatever objects you are going to have in shadow — possibly even tighter than I'm showing here.

Here are some snippets of code that might be useful.

Make sure some object(s) cast shadows:

Make sure some object(s) receive shadows:

Finally, configure some values on the WebGLRenderer:

Yes, you most definitely can use directional lights to cast shadows. You need to make sure you are not using MeshBasicMaterial as they don't support shadows. Use MeshLambertMaterial or MeshPhongMaterial instead.

You need to enable shadows for the renderer with something along these lines:

Then, if the light and objects are placed at appropriate positions. dirLight will cause the shadow of object to be cast against otherObject.

[EDIT]: Here is a working demo for anyone looking to do something similar.

Not the answer you're looking for? Browse other questions tagged javascript three.js or ask your own question.

4735
How to create a GUID / UUID
7626
How do JavaScript closures work?
8240
How do I check if an element is hidden in jQuery?
7710
How do I redirect to another webpage?
5812
How do I include a JavaScript file in another JavaScript file?
2280
How do I chop/slice/trim off last character in string using Javascript?
7418
How to check whether a string contains a substring in JavaScript?
4298
Why does Google prepend while(1); to their JSON responses?
10077
How can I remove a specific item from an array?
6200
How to return the response from an asynchronous call