Ubuntu error with apache: (98)Address already in use

I am getting this error when I try to start Apache in Ubuntu.

I have this in my ports.conf

This is my vhost file

It seems port 80 is already taken. Use another port or try netstat (grep the result to select only the row with value 80 in it), ps and kill to see what application occupies the port and shut it down.

This would return the following:

Then run the following command:

(the pid that appears on your particular instance.)

In all cases killing the process may not work, as the process using the port 80 will get restarted and doesn't allow to use the port. So what can be done is to change the port for apache, if that doesn't matter.

Two things are to be changed for that:

Make sure that you don't have the command Listen 80 in more than one place.

In my case, I was getting the same error and the reason was that this command was both in ports.conf and sites-enabled/000-default.

In my case it was nginx ('cause I have it on my server).

Disable whatever virtualhost is binding to port 80 that you don't want to (nginx?). It's in /etc/nginx/sites-enabled or /etc/apache2/sites-enabled

When you restart or start your server via terminal you might have forgot to add sudo before the command.

I messed up php.ini by having BOTH output_handler=ob_gzhandler AND zlib.output_compression=On (either one, not both, can be set).

So on restarting Apache, it binds to port 80 but nothing else happens. It looks like it is running but php's error locked it up somewhere.

The clue was to check "php -v" ... when I saw it not returning anything (it wrote the error to error_log), I fixed php.ini and Apache was happy again.

Maybe this helps someone...

I got this error on a fresh install of Ubuntu 12.10 when starting apache2.

It's a bug in the apache2. It gets hung in the background. Here is my walkthrough to where the bugs might be in the software.

Here's the error I got:

Address already in Use? What could be using it? Check it out:

That means apache2 is preventing apache2 from starting. Bizarre. This will confirm:

Yes, in this case apache2 is running, I was trying to start apache2 a second time on the same port.

What confuses me is that service reports that apache2 is NOT running:

And when you query apache2ctl for its status, it hangs.

So Ubuntu seems to be having trouble managing apache2 on bootup. Time to stop apache2:

A big clue! You try to stop apache2 and it lost the process id! So Ubuntu can't stop apache2 because it doesn't know where it is!

You would think a reboot would fix it, but it doesn't because apache2 starts on boot and hangs. The normal boot process for apache2 is not working right.

So How to fix it?

I was able to fix this by analyzing the ps command output. Notice that the ps command tells us that that process was started by "/etc/rc2.d/S91apache2 start".

That is the offending program that needs a swift kick.

/etc/rc2.d/S91apache2 is the symbolic link used to start apache2 for you when the computer starts. For some reason it seems to be starting apache2 and then hangs. So we'll have to tell it to not do that.

It's a symbolic link that we don't want it to be there. Do this to prevent apache2 from starting on boot:

Reboot the computer to make sure apache2 doesn't start and hang. Ok good. Now you COULD put apache2 back the way it was, but that would make it fail again.

And the apache2 is back up and serving pages again. There seems to be some serious bugs with apache2/Ubuntu 12.10 that causes apache2 to start and hang. This is a workaround, I suppose the fix is to get newer versions of apache2 and Ubuntu and hope for the best.

In my case, I had removed the default ssl.conf file (renamed to ssl.conf.bak), and had my own ssl config file.

Then I did a yum update and it updated apache... Which also reintroduced the file ssl.conf, which means how I had 2 conf files with Listen 443.

Did you notice above result PID (6399) running python.

Now services is completely stop, you can start again normally.

Except the solution find process running on :80 and kill, then start again,

This is due to port 80 is shifted used by other service.

Check any service is using 80 still

and restart the server 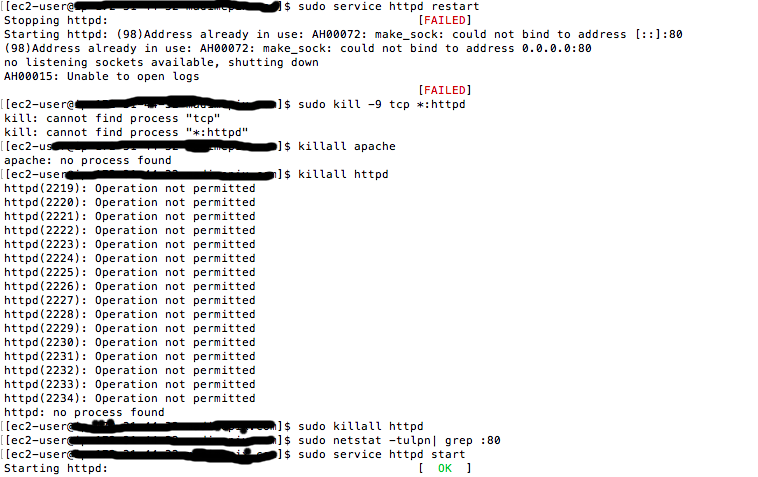 Not the answer you're looking for? Browse other questions tagged apache ubuntu-11.10 or ask your own question.

3
Apache2 runs fine for a while, then stops serving content, error when restarting
0
cKan Failed installation on restarting Apache service