How to read the Stock CPU Usage data

On Ice Cream Sandwich, an option in the Developer Options is "Show CPU Usage", which adds an overlay on the screen (see screenshot below).

My question is, how do I read the data ? I guessed that the package names are the process currently actives, but what does the red and green bars behind mean ? Also what are the 3 numbers on top of the packages ? 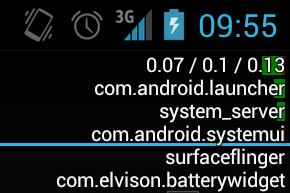 This should be the Unix load average. Wikipedia has a nice article about this.

The numbers show the average load of the CPU in different time intervals. From left to right: last minute/last five minutes/last fifteen minutes

So far this has been the most helpful source of information regarding this I could find. Apparently the numbers do NOT reperesent load average in %: http://forum.xda-developers.com/showthread.php?t=1495763

Linux, Mac, and other Unix-like systems display “load average” numbers. These numbers tell you how busy your system’s CPU, disk, and other resources are. They’re not self-explanatory at first, but it’s easy to become familiar with them.

You probably have a system with multiple CPUs or a multi-core CPU. The load average numbers work a bit differently on such a system. For example, if you have a load average of 2 on a single-CPU system, this means your system was overloaded by 100 percent — the entire period of time, one process was using the CPU while one other process was waiting. On a system with two CPUs, this would be complete usage — two different processes were using two different CPUs the entire time. On a system with four CPUs, this would be half usage — two processes were using two CPUs, while two CPUs were sitting idle.

To understand the load average number, you need to know how many CPUs your system has. A load average of 6.03 would indicate a system with a single CPU was massively overloaded, but it would be fine on a computer with 8 CPUs.

As other answers have pointed, on UNIX systems the numbers represent CPU load averages over 1/5/15 minute periods. But on Linux (and consequently Android), what it represents is something different.

After a kernel patch dating back to 1993 (a great in-depth article on the subject), in Linux the load average numbers no longer strictly represent the CPU load: as the calculation accounts not only for CPU bound processes, but also for processes in uninterruptible wait state - the original goal was to account for I/O bound processes this way, to represent more of a "system load" than just CPU load. The issue is that since 1993 the usage of uninterruptible state has grown in Linux kernel, and it no longer typically represents an I/O bound process. The problem is further exacerbated by some Linux devs using uninterruptible waits as an easy wait to avoid accommodating signals in their implementations. As a result, in Linux (and Android) we can see skewed high load average numbers that do not objectively represent the real load. There are Android user reports about unreasonable high load averages contrasting low CPU utilization. For example, my old Android phone (with 2 CPU cores) normally shown average load of ~12 even when the system and CPUs were idle. Hence, average load numbers in Linux (Android) does not turn out to be a reliable performance metric.

Not the answer you're looking for? Browse other questions tagged android cpu-usage or ask your own question.

227
How to get the CPU Usage in C#?
4108
How do you close/hide the Android soft keyboard programmatically?
1447
How do I pass data between Activities in Android application?
821
How do I discover memory usage of my application in Android?
1439
How can you get the build/version number of your Android application?
42
How can I force the Action Bar to be at the bottom in ICS?
15
Colors of Profile GPU bars on Android M
1
Efficient way to calculate cpu usage of multiple processes in linux