what's the difference between folders 'installedApps' and 'applications' in websphere application server?

The applications path under the Dmgr profile contains the files that have been deployed in the admin console.

The installedApps path under the Node profile contains those files after they've been synchronized out to each node. In most cases, this will be immediately after the deployment as well.

The safest practice would be to deploy a single file using the admin console, rather than editing it in-place on the filesystem: 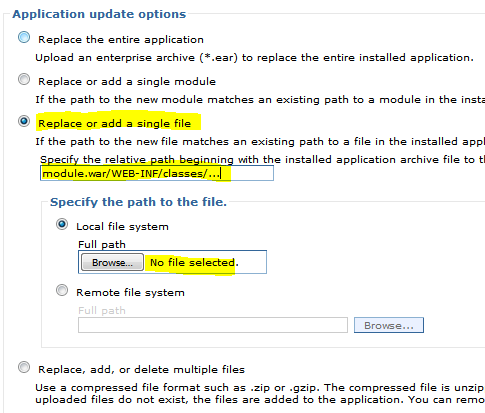 The downside is that you have to enter the entire path to the server-deployed file name. e.g. webapp.war/WEB-INF/classes/com/yourcompany/project/package1/YourClass.class.

If you have a typo, it will deploy, but not where you wanted, and you might not notice it until your expected changes didn't take effect.

Direct edit on the filesystem

That said, it is faster to edit on the filesystem, so we do that at times especially for like JSPs. To do that, you need to edit the copy under the Node's installedApps directory. (The location is controlled by WebSphere variable APP_INSTALL_ROOT, which defaults to ${USER_INSTALL_ROOT}/installedApps.)

web.xml, however, is different. If you edit that in installedApps, the changes won't take effect. Instead, you'll need to edit the one in a path something like:

Or do it in the $DMGRPROFILE_HOME and then synchronize the node (either through syncNode.sh or through the admin console).

Either way, you'll then need to restart the enterprise application.

Not the answer you're looking for? Browse other questions tagged websphere or ask your own question.