What is the purpose/advantage of using yield return iterators in C#?

All of the examples I've seen of using yield return x; inside a C# method could be done in the same way by just returning the whole list. In those cases, is there any benefit or advantage in using the yield return syntax vs. returning the list?

Also, in what types of scenarios would yield return be used that you couldn't just return the complete list?

But what if you were building a collection yourself?

In general, iterators can be used to lazily generate a sequence of objects. For example Enumerable.Range method does not have any kind of collection internally. It just generates the next number on demand. There are many uses to this lazy sequence generation using a state machine. Most of them are covered under functional programming concepts.

In my opinion, if you are looking at iterators just as a way to enumerate through a collection (it's just one of the simplest use cases), you're going the wrong way. As I said, iterators are means for returning sequences. The sequence might even be infinite. There would be no way to return a list with infinite length and use the first 100 items. It has to be lazy sometimes. Returning a collection is considerably different from returning a collection generator (which is what an iterator is). It's comparing apples to oranges.

The fine answers here suggest that a benefit of yield return is that you don't need to create a list; Lists can be expensive. (Also, after a while, you'll find them bulky and inelegant.)

yield return allows you to traverse data structures (not necessarily Lists) in a number of ways. For example, if your object is a Tree, you can traverse the nodes in pre- or post- order without creating other lists or changing the underlying data structure.

The "yield return" iterator blocks won't execute any of the code until you actually call for that specific result. This means they can also be chained together efficiently. Pop quiz: how many times will the following code iterate over the file?

The answer is exactly one, and that not until way down in the foreach loop. Even though I have three separate linq operator functions, we still only loop through the contents of the file one time.

This has benefits other than performance. For example, I can write a fair simple and generic method to read and pre-filter a log file once, and use that same method in several different places, where each use adds on different filters. Thus, I maintain good performance while also efficiently re-using code.

See my answer to this question for a good example:
C# fibonacci function returning errors

Basically, I implement the fibonacci sequence using an iterator block that will never stop (at least, not before reaching MaxInt), and then use that implementation in a safe way.

Improved Semantics and separation of concerns

This is one of those things that's much harder to explain with prose than it is to just who with a simple visual1: 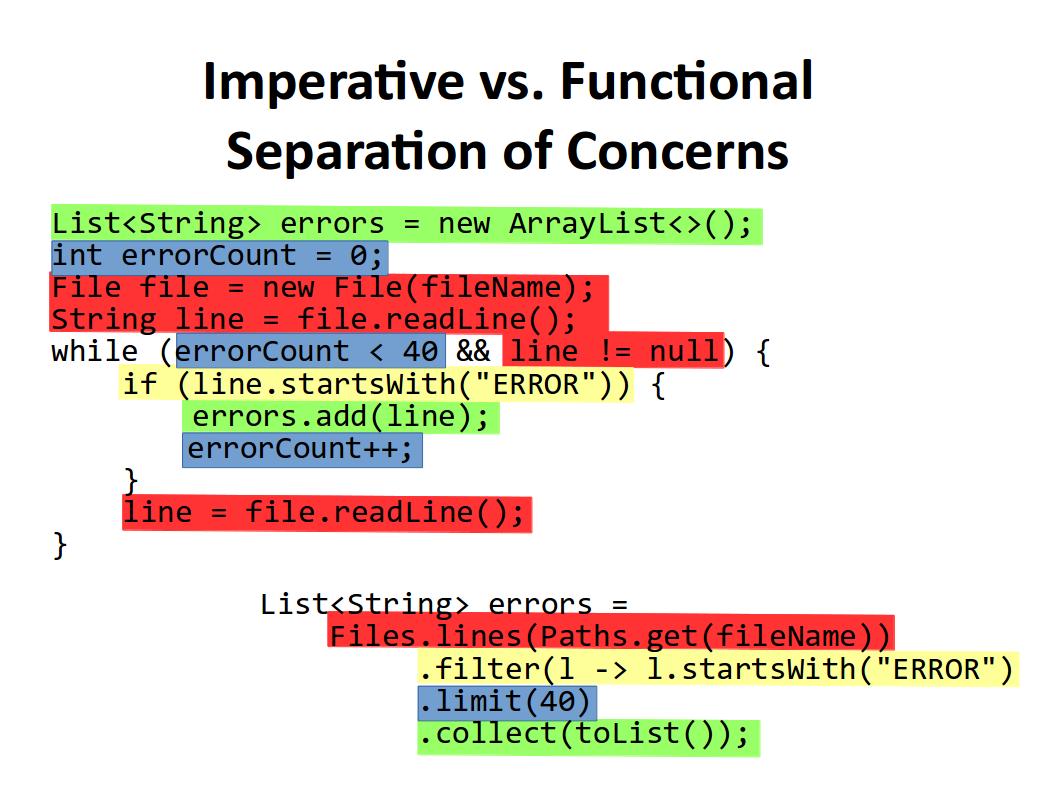 If you can't see the image, it shows two versions of the same code, with background highlights for different concerns. The linq code has all of the colors nicely grouped, while the traditional imperative code has the colors intermingled. The author argues (and I concur) that this result is typical of using linq vs using imperative code... that linq does a better job organizing your code to have a better flow between sections.

Sometimes the sequences you need to return are just too large to fit in the memory. For example, about 3 months ago I took part in a project for data migration between MS SLQ databases. Data was exported in XML format. Yield return turned out to be quite useful with XmlReader. It made programming quite easier. For example, suppose a file had 1000 Customer elements - if you just read this file into memory, this will require to store all of them in memory at the same time, even if they are handled sequentially. So, you can use iterators in order to traverse the collection one by one. In that case you have to spend just memory for one element.

As it turned out, using XmlReader for our project was the only way to make the application work - it worked for a long time, but at least it did not hang the entire system and did not raise OutOfMemoryException. Of course, you can work with XmlReader without yield iterators. But iterators made my life much easier (I would not write the code for import so quickly and without troubles). Watch this page in order to see, how yield iterators are used for solving real problems (not just scientific with infinite sequences).

In toy/demonstration scenarios, there isn't a lot of difference. But there are situations where yielding iterators are useful - sometimes, the entire list isn't available (e.g. streams), or the list is computationally expensive and unlikely to be needed in its entirety.

If the entire list is gigantic, it might eat a lot of memory just to sit around, whereas with the yield you only play with what you need, when you need it, regardless of how many items there are.

Take a look at this discussion on Eric White's blog (excellent blog by the way) on lazy versus eager evaluation.

Using the yield return you can iterate over items without ever having to build a list. If you don't need the list, but want to iterate over some set of items it can be easier to write

You can put all of the logic for determining whether or not you want to operate on foo inside your method using yield returns and you foreach loop can be much more concise.

Here's my previous accepted answer to exactly the same question:

Another way to look at iterator methods is that they do the hard work of turning an algorithm "inside out". Consider a parser. It pulls text from a stream, looks for patterns in it and generates a high-level logical description of the content.

Now, I can make this easy for myself as a parser author by taking the SAX approach, in which I have a callback interface that I notify whenever I find the next piece of the pattern. So in the case of SAX, each time I find the start of an element, I call the beginElement method, and so on.

But this creates trouble for my users. They have to implement the handler interface and so they have to write a state machine class that responds to the callback methods. This is hard to get right, so the easiest thing to do is use a stock implementation that builds a DOM tree, and then they will have the convenience of being able to walk the tree. But then the whole structure gets buffered up in memory - not good.

But how about instead I write my parser as an iterator method?

That will be no harder to write than the callback-interface approach - just yield return an object derived from my LanguageElement base class instead of calling a callback method.

The user can now use foreach to loop through my parser's output, so they get a very convenient imperative programming interface.

The result is that both sides of a custom API look like they're in control, and hence are easier to write and understand.

The basic reason for using yield is it generates/returns a list by itself. We can use the returned list for iterating further.

Not the answer you're looking for? Browse other questions tagged c# iterator yield-return or ask your own question.