Each image is about 10-13k but the bunch seems to be loading very slow. I realize that there is some bottle-necking in the number of requests a browser can execute at a time but the wait times seem to be gratuitous.

Any suggestions on how to get images loaded from a database fast?

Also, and this is almost a separate question, but is it possible to instruct a browser (or server) to cache images with now .gif/.png/.jpg srcs? It seems that Firefox does and Chrome doesn't, but I'm not certain of this. 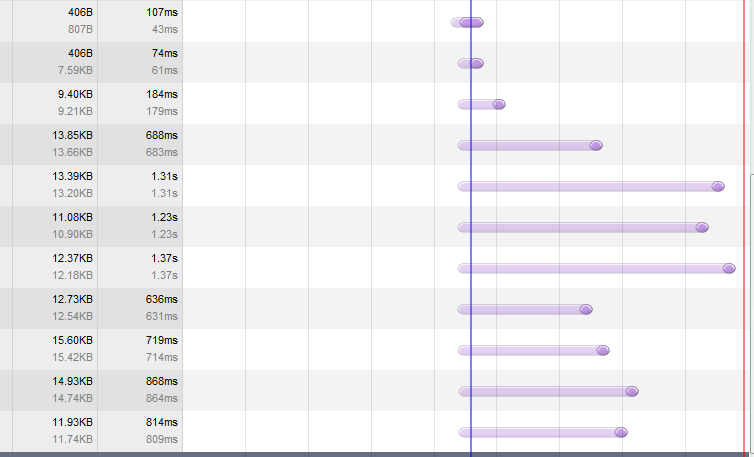 I'd first consider whether storing images in a database makes the most sense. It may, but it should be seriously considered, as giving each image a unique filename in the filesystem and storing that in the database will often be faster.

You would gain additional speed if you could request that file directly from the client as opposed to requesting a generic PHP script that does some sort of fopen()-style abstraction.

In order to narrow down the source of delay, it first might be helpful to check whether your database is hosted on the same server as your webserver. One indication that it is not hosted locally but on a remote database server is to check the host string you're providing in the mysql_connect() call. localhost would suggest its local, something else would suggest it's not. As a note, many shared hosted services (e.g. GoDaddy) split their database server from the webserver.

For a better idea of the source of the delay, I'd suggest instrumenting your image_loader.php code with timestamps to locate the delay? My guess is that it'll be in the query.

If the delay is in your query, you will want to limit the number of queries you make. A strategy that allows you to make one query instead of 9 would limit the impact any webserver-to-database server delay.

Not the answer you're looking for? Browse other questions tagged php sql performance wordpress or ask your own question.

1484
Insert into … values ( SELECT … FROM … )
1831
How to return only the Date from a SQL Server DateTime datatype
1990
How to concatenate text from multiple rows into a single text string in SQL server?
1280
How can you speed up Eclipse?
2610
Deleting an element from an array in PHP
2457
How do I get a YouTube video thumbnail from the YouTube API?
3814
How do I UPDATE from a SELECT in SQL Server?
0
Google Visualization API php ajax