I have several questions about creating a Java Web application with Maven and Eclipse:

Wow that's a lot of questions at once. I admit that setting up a webapp project with Maven and Eclipse can be tricky, so I'll try to answer them all.

How do I create a java web project with servlets jsp and other classes with maven? It creates a simple directory structure, src->main->java.

When you are creating a Java web project, the final product should be a WAR or EAR file. WAR and EAR files are JAR files with a specific structure that can be deployed in an application server or servlet container.

As mentioned, the easiest way to set up a Maven project for web applications is to use archetypes:

If we create a project with this archetype then a simple directory structure and pom.xml are generated. This project follows the standard Maven directory layout you mention, with /src/main/java/, /src/test/java, etc. Maven generates the WAR file from this structure with the war:war goal.

Note that this archetype is for a very simple (outdated) web application, but it's the best available starting point. You probably want to discard the web.xml file and create a new one that supports Servlet 3.0.

Where and how do I put the web-inf folder?

By default, Maven expects resources that should go in the root of the WAR file -- such as images, html pages and the WEB-INF directory -- to reside in /src/main/webapp/. So the WEB-INF folder should be located at /src/main/webapp/WEB-INF/. If you use the maven-archetype-webapp this directory is automatically created, along with a sample web.xml file.

You mentioned Eclipse in the question title, and it is indeed possible to develop Mavenized web applications in Eclipse with the m2eclipse plugin. Eclipse has good support for Web applications through WTP (Web Tools Platform).

Although many guides on the internet (wrongly) recommend it, you should not use the mvn eclipse:eclipse command to create the Eclipse project. This plugin can only generate WTP projects for very old Eclipse versions (WTP 2.0 is the maximum). Instead, use the m2eclipse plugin as described here.

Do I need to add the jdbc-drivers manually to the folder inside the web-inf/lib, or is it ok just to point out the dependency?

There is no need to do this manually, since one of the key strengths of Maven is dependency management. If you add a dependency in the pom.xml with a scope of compile or runtime, the JAR file will be automatically included in the WEB-INF/lib/ directory of the WAR file. For example to add the Postgresql JDBC driver dependency, add this to your pom.xml:

Since the scope is unspecified Maven will assume it is in the the default scope compile. The result is that Maven will include WEB-INF/lib/postgresql-9.1-901.jdbc4.jar in the WAR file.

Is there a way to test the servlets with junit?

This question has been asked (and answered) on Stackoverflow:

You should create a project based on the webapp Maven archetype, not the default one you're using.

I'm using SpringSource Tool Suite, which, for this exercise, is the same as Eclipse with m2e. Create a new Maven project and make sure you select the following archetype: 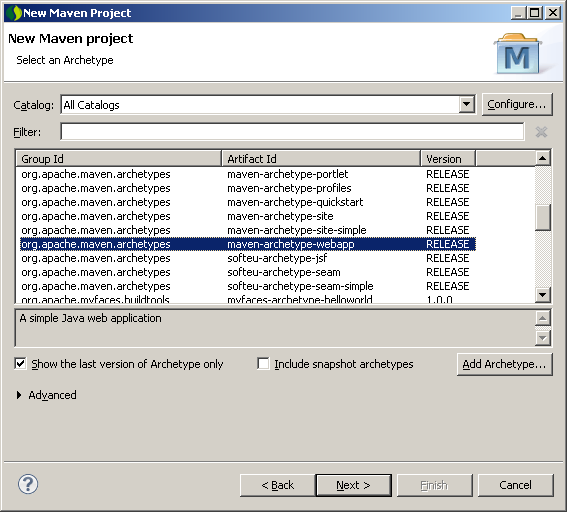 The Maven the command-line way of doing this is:

This archetype will put the WEB-INF folder in the correct location (under src/main/webapp).

You can find more information at http://maven.apache.org/guides/mini/guide-webapp.html

Just create a normal "Dynamic Web Project". Then right click the project name and select Configure > Convert To Maven Project. It can take up to a minute to complete the conversion, so be patient. See the following article:

If that doesn't work, try this:

Use m2eclipse plugin of eclipse to enable MAVEN in eclipe.

Web.xml will be at \src\main\webapp\WEB-INF

Not the answer you're looking for? Browse other questions tagged java eclipse jakarta-ee maven junit or ask your own question.

6344
Is Java “pass-by-reference” or “pass-by-value”?
3930
How do I read / convert an InputStream into a String in Java?
3409
How do I generate random integers within a specific range in Java?
689
Can I add jars to maven 2 build classpath without installing them?
1230
'Must Override a Superclass Method' Errors after importing a project into Eclipse
1876
“Debug certificate expired” error in Eclipse Android plugins
1093
How to add local jar files to a Maven project?
394
Maven does not find JUnit tests to run
3130
How to create a memory leak in Java?
715
Dealing with “Xerces hell” in Java/Maven?