I want to make an desktop application that only runs on machines that have key or licence. How this can be achieved?

This depends entirely on how secure you want to make it...

This is only a problem if you plan on going mass market and selling it and piracy would actually be a problem though.

If you're not concerned about this, then you can either go for online, or offline checking.

The company I work with uses the online method; there are a few steps:

EDIT: I've since changed how this works, as the old way was a maintenance nightmare.

To generate the keys, just use the same hashing function, and then upload the hash to your server.

If you want it to be offline, you could include the hashes in the code I guess and check against them there.

I should point out, however, that I'm not a security expert by any means, I just develop for a company as a portion of a Ph.D. and this is just how I did it. 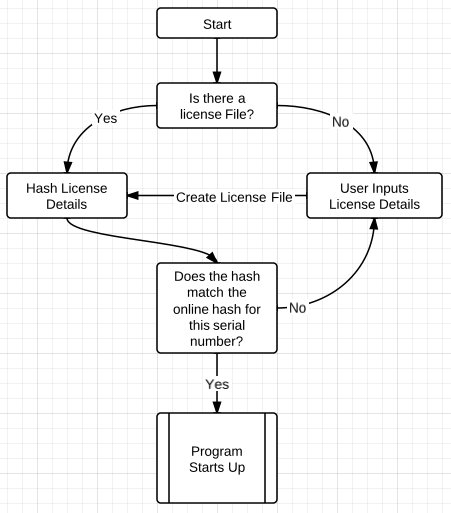 every time the program successfully verifies online, it also adds an offline access password to the license file, which means it's robust against temporary internet downtime, and will only stop working if the internet is down for more than a week/month/however long it's set up to work for.

You can track licencing of a machine with macIP on online . Even in windows you can write in registry there is no api but still you can do it. Find snippet bellow to read registry -

And in class level if you want to obfuscate use proGuard .

it depends how many customer you plan to have and the distribution mode also. You may use a licence server but this require an internet connection for the customer. You can also use USB dongles to manage licencing.

There are no perfect system you need to make a comproise between simplicity, effort and price.

Not the answer you're looking for? Browse other questions tagged java security licensing or ask your own question.

1056
How can I generate an MD5 hash in Java?
3
How can I stop my app from being lucky patched?
1
What is the point of server validation if client-side conditionals can be altered?

4059
What are the differences between a HashMap and a Hashtable in Java?
7233
Is Java "pass-by-reference" or "pass-by-value"?
4247
Avoiding NullPointerException in Java
4421
How do I read / convert an InputStream into a String in Java?
3822
How do I generate random integers within a specific range in Java?
2665
How can I create an executable JAR with dependencies using Maven?
1952
How do I break out of nested loops in Java?
1803
How to split a string in Java
3281
How do I convert a String to an int in Java?
25944
Why is processing a sorted array faster than processing an unsorted array?