I am attempting to deploy my first development iPhone app, and am running into some problems. I have successfully went though the online Provisioning Assistant, but now I am stuck. No matter what I do, I always get the following error.

Anyone have any ideas why this is happening?

Update:
The Technical Note in my original answer is now deprecated. Apple posted a collection of code signing problems (and some solutions) in a new document: Technical Note TN2407 Code Signing Troubleshooting Index

Check the CODE_SIGN_IDENTITY property in your build settings. Is your provisioning profile selected there?
You also need to enter a valid bundle identifier in your apps .plist.
The identifier has to match the one you provided when generating the profile.
Apple has a technote about that here.

I just came across this error, and here's what I found out in case this helps anyone: I discovered that you can right click the error message in Xcode and choose expand to get more details, including a description of the problem.

In my case, I had two copies of my developer certificate with the same name in different keychain files, and Xcode couldn't figure out which one to use.

It might be strange answer for codesign issue in Xcode 9.0. I was receiving this error too and did not know what to be done, because everything was correct.

I went to the keychain, I had the login option "unlocked". I locked it and compiled my build again. Xcode itself asked me to open access keychain. I gave access and it worked.

I had the exact same error, and tried everything under the sun, including what was elsewhere on this page, with no success. What the problem was for me was that in Keychain Access, the actual Apple WWDR certificate was marked as "Always Trust". It needed to be "System Defaults". That goes for your Development and Distribution certificates, too. If any of them are incorrectly set to "Always Trust", that can apparently cause this problem.

So, in Keychain Access, click on the Apple Worldwide Developer Relations Certificate Authority certificate, select Get Info. Then, expand the Trust settings, and for the combo box for "When using this certificate:", choose "System Defaults".

Others have commented that you may have to do this in System and login keychains for these errors.

There could be a lot of reason when you get this kind of error:

I had the same problem the distribution build. It just happened all of sudden. In fact I did not have this problem a few days ago and I had my Ad-Hoc version compile right. This issue came up because my certificate just expired today. So I went create a new provisional following Apple's guidance: (http://developer.apple.com/ios/manage/distribution/index.action).

After spending hours on the net and made sure I had not fallen for what could go wrong. Here is what save me as suggested by Tobias and Dan Ray:

The detailed information told me about ambiguous matching two certificates. One of them happened to be an expired certificate in the System key chain. So I deleted the expired one then it worked! I also had a concern about what to enter in the "common name" when create the distribution certificate using the keychain utility: my name or my company name. In my case, I entered my name. I am guessing it is the same as the title that addressed by the developer's auto responder email.

If the error immediately preceding the codesign error says something like 'resource fork, Finder information, or similar detritus not allowed'

Then navigate to the .app file in Terminal and type:

What worked for me was adding --deep to Other Code Signing Flags in Build Settings. More information here: Codesign of Dropbox API fails in Xcode 4.6.3: "code object is not signed at all"

Unfortunate that this ambiguous error condition has 400 different solutions, but I digress.

I had the same problem. In the end it turned out that my private key did not allow codesign to access it. One can see this in the info dialog in keychain application.

I have to agree with Tobias. The error is too generic. When the same thing happened to me I dug into the error message and realized I'd screwed up something in the build properties, but not the code signing. So yeah, I'd dig in to the details.

In my case error was due to the fact that I had two keys on the keychain with the same name. I deleted the old one and that solved the issue.

Going to the detail message show the real problem to me.

after hours of googling and trying out different things, this is what fixed it for me:

hope this helps some of you!

Same issue with ambiguous (matches "iPhone Developer: [me] " and /// tweetdeck's library privatedata file. Fixed it by moving file to the trash and re-logging into Tweetdeck, setting up passwords again. What a pain.

I had the same problem but also listed in the error log was this: CSSMERR_TP_CERT_NOT_VALID_YET

Looking at the certificate in KeyChain showed a similar message. The problem was due to my Mac's system clock being set incorrectly. As soon as I set the correct region/time, the certificate was marked as valid and I could build and run my app on the iPhone

I was also getting this error ("/usr/bin/codesign failed with exit code 1"), and when I looked in Keychain Access my developer certificates were marked as "This certificate was signed by an unknown authority". I had recently upgraded to Mac OS 10.8 and have had a couple of other XCode (4.5.2) issues since then. It turns out I did not have the WWDR intermediate certificate installed. I downloaded that from the iOS Provisioning Portal, installed that in Keychain Access, and my project builds again!

When I got this error I wasn't even trying to sign the app. I was writing a test app and didn't care about signing. In order to get rid of this message I had to select "Don't Code Sign" from Build Settings under Code Signing.

Sometimes your build folder simply needs cleaning - it certainly worked for me. Thanks to loafer-project for the solution.

One possible cause is that you doesn't have permission to write on the build directory.

Solution: Delete all build directory on your project folder and rebuild your application.

I just came across this error and it was because I was trying to write the build file to a network drive that was not working. Tried again from my desktop and it worked just fine. (You may have to "Clean" the build after you move it. Just choose "Clean all Targets" from the "Build" drop-down menu).

Tobias is correct though, dig into the details on the code by right-clicking it to see what your specific problem is.

One thing that you'll want to watch out for (it's a stupid mistake on my part, but it happens), is that the email address attached to the CSR needs to be the same as the email connected to your Apple Dev account. Once I used a new CSR and rebuilt all the certs and provisioning profiles, all was well in applesville.

Another reason, Check your Developer account is connected with xCode 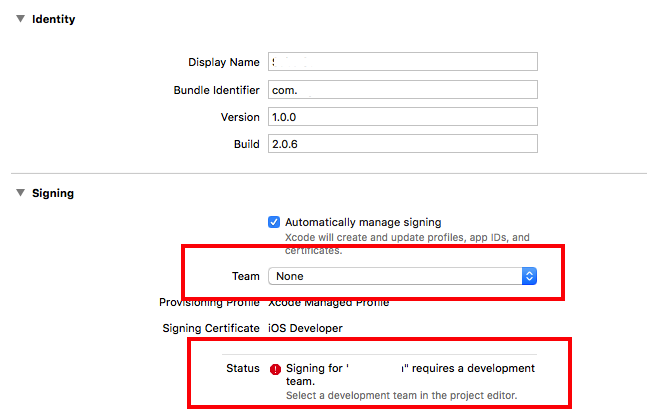 Kinda old question, but still happens it seems. Another solution:

Occurred for me after reverting a branch in git. Tried cleaning, cleaning builds, deleting derived and restarting Xcode, but no luck.

I had the same unknown error from codesigning that you mentioned. Similar to the answer provided (but a little different), I just locked my keychain access and unlocked it, and I was able to build and run to my device again. If anyone has the same issue, perhaps try that first before going through the trouble of modifying the keychain password.

Throwing my comments into the ring, I just came across this after attempting to refresh my development environment after clicking DENY accidentally on one of the application requests, after searching around I found a number of things that didn't seem to work. This is the full order in which I've attempted the fixes and whether there was a success:

1) Attempted to clear the DerivedFiles and restart XCode - no dice

2) Attempted to Log and Unlock the Keychain, then restart XCode - no dice

3) Attempted to refresh my developer account within XCode - no dice

4) Bit the bullet and just reset my entire keychain, after doing so my developer account was signed out (signed back in), then restarted XCode - no dice

5) Found an article on here that said that we needed to set the [login|local|System]/certificate/Apple Worldwide Developer Relations Certificate Authority to "System default". But in my case it was already set to system default - no dice

6) Then I looked at my actual developer certificate login/my certificates/Mac Developer: and when I looked in there it was correctly set to Confirm before allowing access BUT there was no entries in the lower section. There should be [Xcode, codesign, productbuild]. I deleted the certificate entry and restarted XCode - bingo

The certificate was added and I was then prompted. So what did I do, I pressed "always allow" and then just boned myself.

I had to go back and delete the certificate again, then go through about 20 allow dialogs during a clean build. Once completed, I was able to build completely.

In My Case, after a fews days of research,

All I did to revolve is listed below:

This should work for similar codesign issues.

Note, during this process the OS would ask for your credential validation.

I use Xamarin and for me this is what worked after trying everything else. In Visual Studio for Mac I've opened a .xib file so it opens the project in Xcode.

Went to the project settings > Signing and Capabilities, selected the team and then fixed the Signing Certificate.

I think the issue is with the Keychain Access and certificate trust.

This works for me.