Are volatile variable 'reads' as fast as normal reads?

Can volatile variables ever be placed in the cpu cache or is it always fetched from the main memory?

You should really check out this article: http://brooker.co.za/blog/2012/09/10/volatile.html. The blog article argues volatile reads can be a lot slower (also for x86) than non-volatile reads on x86. 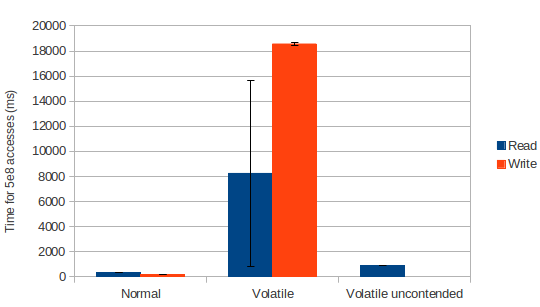 Credit to Marc Booker for running these tests.

The answer is somewhat architecture dependent. On an x86, there is no additional overhead associated with volatile reads specifically, though there are implications for other optimizations.

To clarify: There is not any additional overhead associated with the read itself. Memory barriers are used to ensure proper ordering. JSR-133 classifies four barriers "LoadLoad, LoadStore, StoreLoad, and StoreStore". Depending on the architecture, some of these barriers correspond to a "no-op", meaning no action is taken, others require a fence. There is no implicit cost associated with the Load itself, though one may be incurred if a fence is in place. In the case of the x86, only a StoreLoad barrier results in a fence.

As pointed out in a blog post, the fact that the variable is volatile means there are assumptions about the nature of the variable that can no longer be made and some compiler optimizations would not be applied to a volatile.

Volatile is not something that should be used glibly, but it should also not be feared. There are plenty of cases where a volatile will suffice in place of more heavy handed locking.

It is architecture dependent. What volatile does is tell the compiler not to optimise that variable away. It forces most operations to treat the variable's state as an unknown. Because it is volatile, it could be changed by another thread or some other hardware operation. So, reads will need to re-read the variable and operations will be of the read-modify-write kind.

This kind of variable is used for device drivers and also for synchronisation with in-memory mutexes/semaphores.

Volatile reads cannot be as quick, especially on multi-core CPUs (but also only single-core). The executing core has to fetch from the actual memory address to make sure it gets the current value - the variable indeed cannot be cached.

As opposed to one other answer here, volatile variables are not used just for device drivers! They are sometimes essential for writing high performance multi-threaded code!

volatile implies that the compiler cannot optimize the variable by placing its value in a CPU register. It must be accessed from main memory. It may, however, be placed in a CPU cache. The cache will guaranty consistency between any other CPUs/cores in the system. If the memory is mapped to IO, then things are a little more complicated. If it was designed as such, the hardware will prevent that address space from being cached and all accesses to that memory will go to the hardware. If there isn't such a design, the hardware designers may require extra CPU instructions to insure that the read/write goes through the caches, etc.

Typically, the 'volatile' keyword is only used for device drivers in operating systems.

Not the answer you're looking for? Browse other questions tagged java performance multithreading volatile or ask your own question.

1
cost of volatile read in java when write are infrequent
12
volatile synchronized combination for performance
6
Access to volatile fields through local variables
4
Cheapest way of establishing happens-before with non-final field
2
Can I avoid the volatile read in double checked locking once initialized like this?
0
Why volatile is working faster than non-volatile?
0
Writing of primitives to stack or heap?
1
FutureTask Implementation re-read state to prevent leaked intterupts

3997
What are the differences between a HashMap and a Hashtable in Java?
722
What is the volatile keyword useful for?
734
Volatile vs. Interlocked vs. lock
1534
Fastest way to determine if an integer's square root is an integer
3124
Improve INSERT-per-second performance of SQLite
271
Difference between volatile and synchronized in Java
116
Is volatile expensive?
2333
Why are elementwise additions much faster in separate loops than in a combined loop?
1514
Replacing a 32-bit loop counter with 64-bit introduces crazy performance deviations with _mm_popcnt_u64 on Intel CPUs
2473
Why is “1000000000000000 in range(1000000000000001)” so fast in Python 3?