Choosing between XAML's ListView and GridView in WinRT

The GridView and the ListView in XAML seem to be the same control.

How does a developer choose between the two?

The GridView control typically scrolls horizontally. Also, you will see some native spacing between items that is greater than that in the ListView. This spacing is there because of the intent for how the controls will be used in Windows Store apps. (read on)

THIS IS THE ANSWER

The general differentiation between the two is their occurance in views. A GridView tends to appear in FullView, FillView, and Portait. The ListView, because of its vertical orientation, tends to appear in the SnapView. Either control can appear in either view, but this is the local diversion of the two controls. 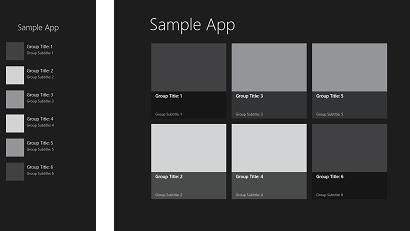 The ListView displays data stacked vertically. It's often used to show an ordered list of items, such as a list of emails or search results. It's also useful in master-detail scenarios, where the list items contain only a small amount of info and the details of the selected item are shown separately.

The GridView displays data stacked horizontally. It's often used when you need to show a rich visualization of each item that takes more space, such as a photo gallery.*

The only difference the user will notice is the touch selection gesture. For GridView the selection gesture is an Up->Down swipe. For ListView it's a Left->Right swipe. I assume this is so the list can differentiate a selection swipe from a scroll attempt.

In Xaml you'll also notice that the default ItemsPanel is different. ItemsWrapGrid for GridView and ItemsStackPanel for ListView (as of Win8.1 virtualizing panels; in 8.0 it's WrapGrid and StackPanel). This could affect what properties are available to you for customization in your Xaml.

Not the answer you're looking for? Browse other questions tagged windows-8 windows-runtime windows-store-apps winrt-xaml or ask your own question.

3
GridView selection color in WinRT Metro
6
ScrollViewer GridView XAML
0
Big spaces between items in GridView (WinRT)
82
ListViewItem won't stretch to the width of a ListView
21
Is there a WrapPanel (not WrapGrid) control in WinRT-XAML?
0
Implement Semantic Zoom without listview, Gridview?
1
Drag and Drop Items in desired position Listview WinRT
1
Horizontal ListView items do not scroll when swiped in WinRT app?
0
WinRT Acessing GridView in a Listview in a Grid