In one part of a batch file (kind of, see Extra Information) I need to restart Explorer, so I use the, tried-and-tested method of

I can then only properly restart Explorer by starting a new task from Task Manager, as, I'm assuming, Win + R is part of Explorer.

Now, I say "kind of" as I'm running the batch file from a self-executing SFX archive, created with WinRAR. So, when executed, the contents of the archive are extracted to %temp% and a user-defined file (usually a boot-strapper and, in this case, my batch file) is run upon successful extraction.

I can confirm that it works on Windows XP and Windows 7 x86 but not Windows 7 x64 (which is my system).

At the moment, I'm suspicious of WinRAR, as I've proved that the code itself works. So, I'm creating the self-executing SFX with different versions of WinRAR. So far, I've tried versions:

and had the same results every time.

I submitted a bug report to dev@rarlab.com yesterday and got a reply from Eugene Roshal himself this morning

Hello, SFX module uses ShellExecuteEx to start a setup application. Normally it works well. I do not know why Explorer decides to switch to windowed mode. Now I built a small standalone program

which runs test.bat with contents as in your sample. This program shows exactly the same behavior as WinRAR SFX, so Explorer is started in window.

and a second email this morning

but result is the same. I tried to use other SW_ flags like SW_SHOWDEFAULT or SW_RESTORE with ShellExecuteEx also as "open" and "explore" lpVerb, but it does not help. For now I do not understand the logic behind this windowed versus desktop mode.

I realise the outlook is grim but, I hope that's of help to someone..

Link to an SFX archive demonstrating this, if anyone wants it: https://dl.dropbox.com/u/27573003/Social%20Distribution/restart-explorer.exe 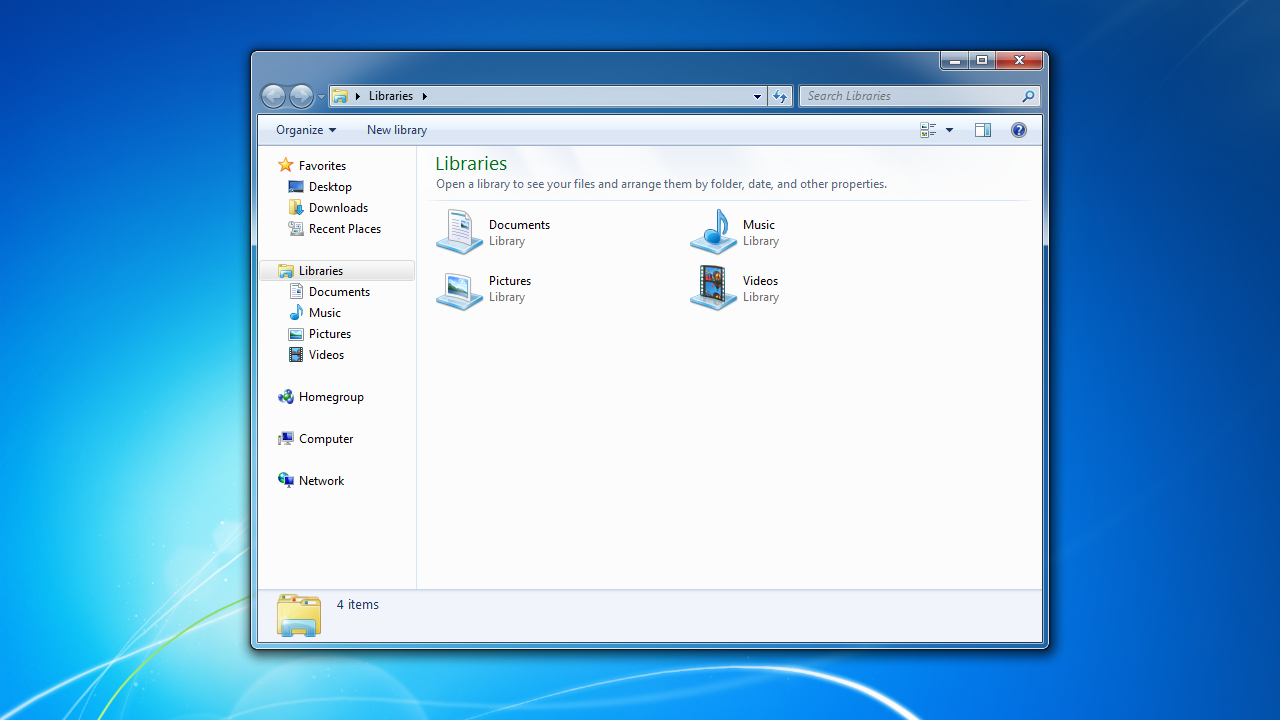 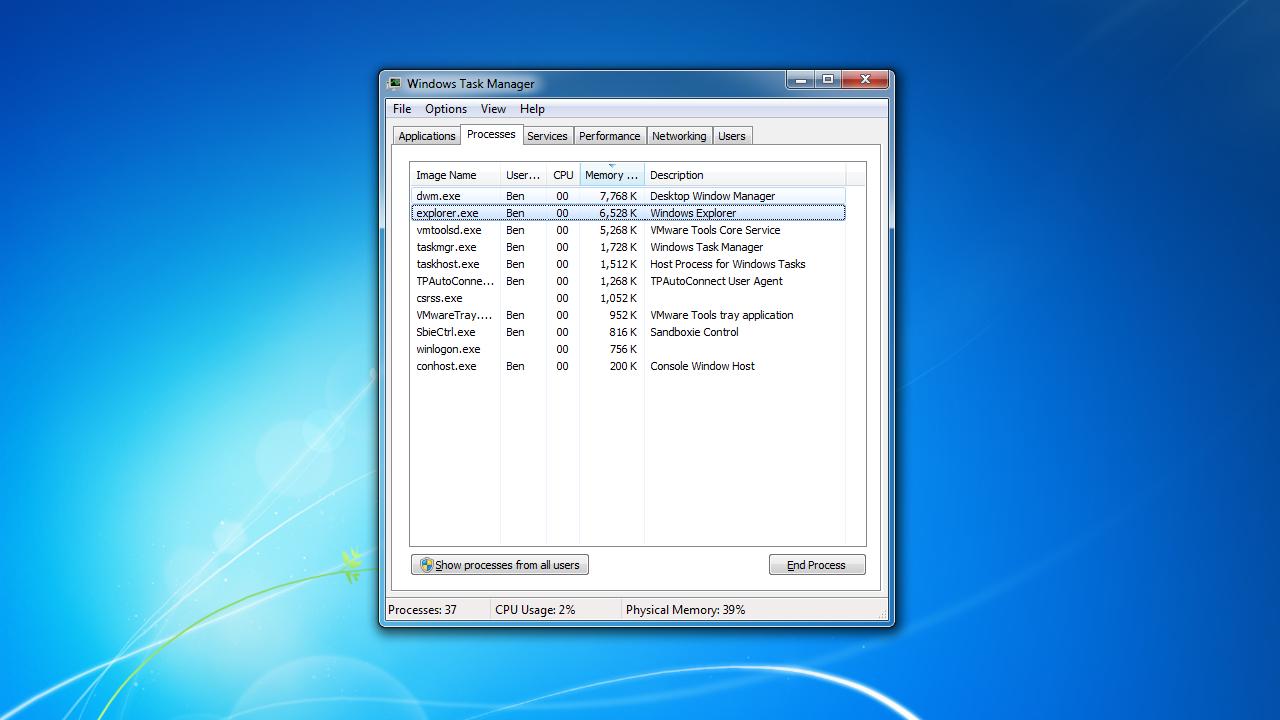 You may notice here that I'm running the commands inside a VM (as denoted by VMwareTray.exe) but it is not a VM-caused conflict. I've tested the exact same files on my own host system (which is the same OS) and have had the same results.

I'm experiencing similar "works outside of an SFX archive but not from one" problems when using REG ADD in a completely different project. I just don't think SFX archives play nice with batch files.

I think user1631170 is on to something, "I wonder if some part of Win-RAR is running in 32-bit mode? Could you even start explorer64 running from a 32-bit process? I am pretty certain that Windows won't do that."

When I start explorer.exe from ProcessHacker (32-bit process manager), I get an explorer window.

But I can force it to start the 64-bit explorer with this:

sysnative is a keyword that Windows recognizes to bypass the file system redirection for 32-bit/64-bit (http://msdn.microsoft.com/en-us/library/windows/desktop/aa384187(v=vs.85).aspx Enjoy!

I had this same problem and found that all the solutions here still didn't work from a batch script.

None of these worked completely:

because they all either opened a window (and didn't show the taskbar again), or the batch script then hung thereafter and couldn't execute any more commands

I found that this line in the batch file did work (after killing explorer.exe):

This works in Windows 7:

For restarting explorer.exe, this worked for me.

When you run explorer.exe from an 32-bit application in 64-bit windows, the path will be redirected to the SysWOW64 directory which contains the 32-bit explorer.exe.

So it is still like before that you can control whether a window or a shell should be started by starting explorer.exe with or without a path as commandline parameter.

Instead, you should force starting the 64-bit explorer.exe from the 32-bit application and all is ok. To do this, one method is using the sysnative directory as mentioned above. But another method is to use Wow64DisableWow64FsRedirection/Wow64RevertWow64FsRedirection.

I did the latter and can confirm it works nicely. For both CreateProcess and ShellExecuteEx API.

I have seen similar problems before doing this in C#. The process had to be invoked by calling explorer shell rather than explorer window, but I haven't had any problems in batch.

The difference between the other answers being explorer rather than explorer.exe which has caused problems before for me.

The other day, I was having a look through some of WinRAR's more advanced options and came across this tab: 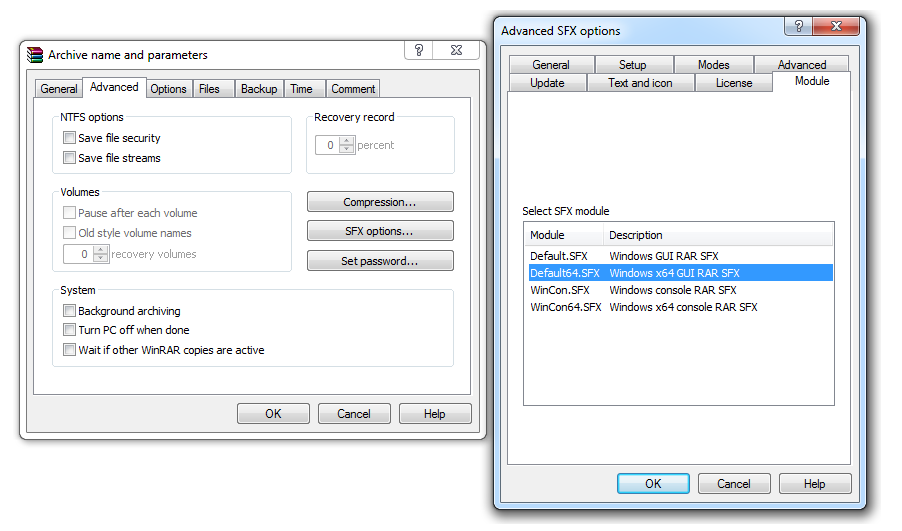 As soon as I saw that I suspected it to be part of the problem and solution, as this issue only ever occurs on Windows 7 x64.

As suspected, using the Default64.SFX module instead of the default Default.SFX module entirely fixed the issue. Finally.

I do not understand why, but it will only for me if using the full path, regardless of your PATH variable.

Have same issue with Visual Studio.

But this make other problem (the IDE is frozen after the explorer runs) and now I'm only able to restart the IDE to run build command again...

Use this (.bat with administrative privileges) in x64 or x86

What worked for me in Windows 7 64 bit was "C:\Windows\expstart.exe" or just expstart.exe

Try adding a explorer.exe key to App Paths in the registry.

or copy the following to notepad and save it as a .reg file then run it:

To see the start panel you need to execute the explorer.exe from the system32 folder 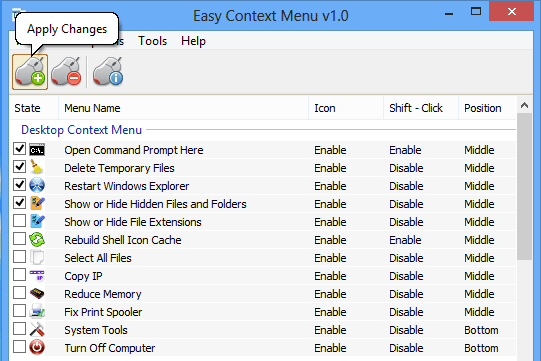 Not the answer you're looking for? Browse other questions tagged windows batch-file explorer taskkill or ask your own question.

500
Create folder with batch but only if it doesn't already exist
3
Testing/Debugging Shell Extension & Regasm & explorer.exe
11
How can I create an auto-executing, WinRar SFX file from a batch file?
2
Reopening the taskbar (explorer.exe) after it has been killed?
0
Unhide file extensions without logging out
2
.bat file does not reload explorer.exe (win10)
3
Reload a namespace extension in explorer.exe that failed to load previously
1
setx Causes Windows Explorer to Scroll to Top