What is the difference between Non-Repeatable Read and Phantom Read?

What is the difference between non-repeatable read and phantom read?

I have read the Isolation (database systems) article from Wikipedia, but I have a few doubts. In the below example, what will happen: the non-repeatable read and phantom read?

Another doubt is, in the above example, which isolation level should be used? And why?

From Wikipedia (which has great and detailed examples for this):

A non-repeatable read occurs, when during the course of a transaction, a row is retrieved twice and the values within the row differ between reads.

A phantom read occurs when, in the course of a transaction, two identical queries are executed, and the collection of rows returned by the second query is different from the first.

In the above example,which isolation level to be used?

In your example, you won't have a phantom read, because you select only from a single row (identified by primary key). You can have non-repeatable reads, so if that is a problem, you may want to have an isolation level that prevents that. In Oracle, transaction A could also issue a SELECT FOR UPDATE, then transaction B cannot change the row until A is done.

A simple way I like to think about it is:

Phantom reads are similar but when reading from committed INSERTS and/or DELETES from another transaction. There are new rows or rows that have disappeared since you began the transaction.

Dirty reads are similar to non-repeatable and phantom reads, but relate to reading UNCOMMITTED data, and occur when an UPDATE, INSERT, or DELETE from another transaction is read, and the other transaction has NOT yet committed the data. It is reading "in progress" data, which may not be complete, and may never actually be committed. 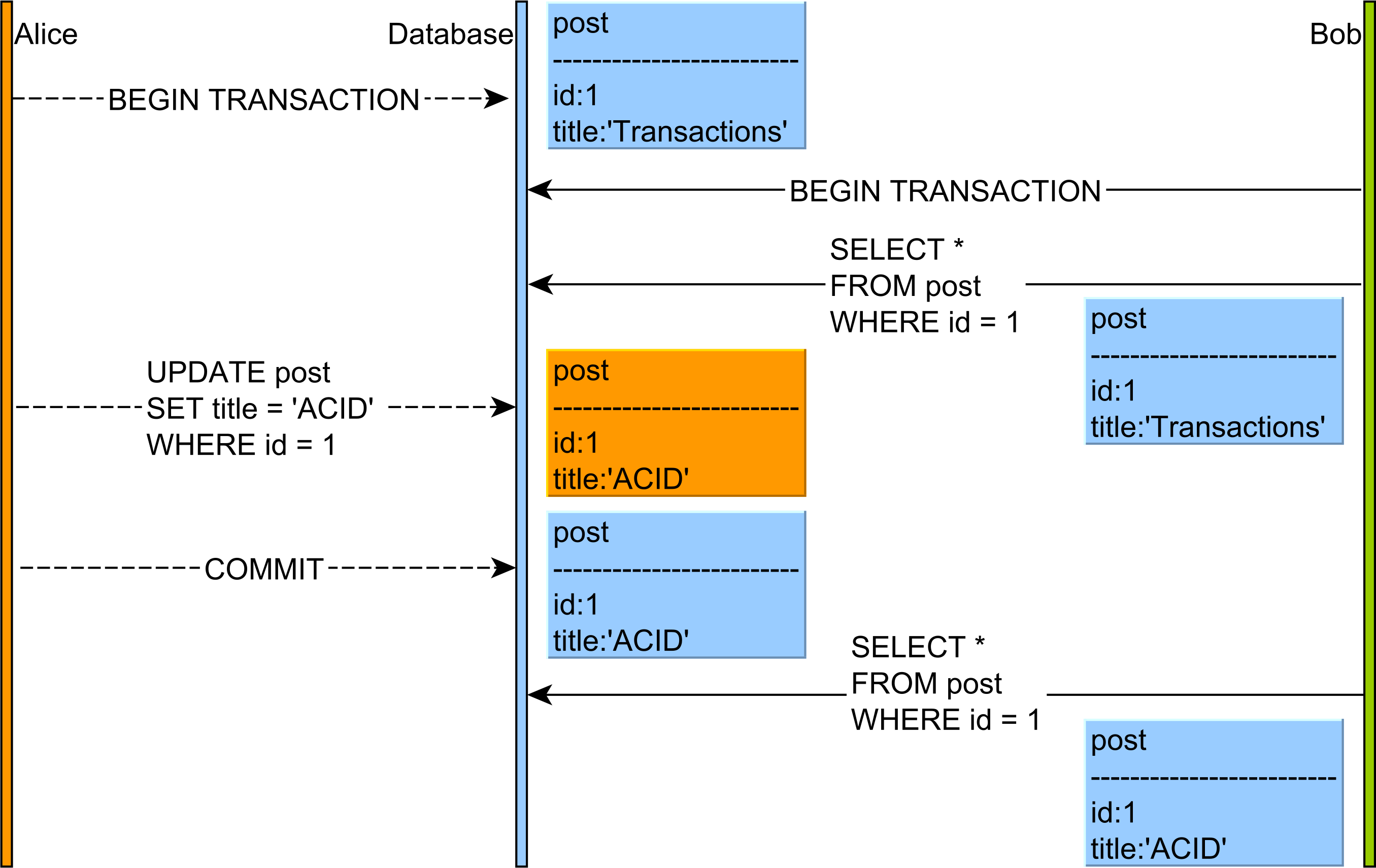 The Phantom Read anomaly can happen as follows: 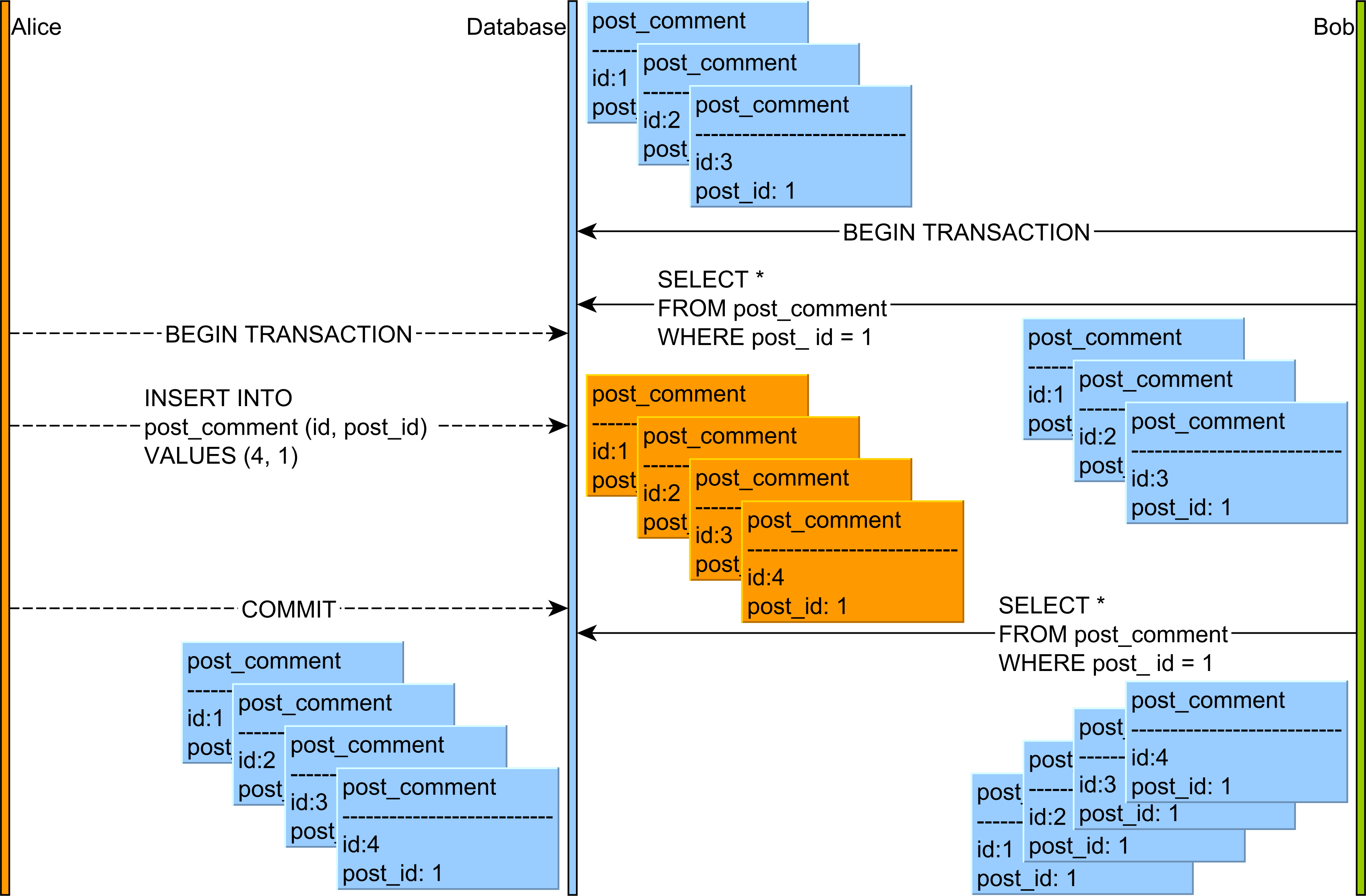 So, while the Non-Repeatable Read applies to a single row, the Phantom Read is about a range of records which satisfy a given query filtering criteria.

Note : DELETE statements from another transaction, also have a very low probability of causing Non-repeatable reads in certain cases. It happens when the DELETE statement unfortunately, removes the very same row which your current transaction was querying. But this is a rare case, and far more unlikely to occur in a database which have millions of rows in each table. Tables containing transaction data usually have high data volume in any production environment.

Also we may observe that UPDATES may be a more frequent job in most use cases rather than actual INSERT or DELETES (in such cases, danger of non-repeatable reads remain only - phantom reads are not possible in those cases). This is why UPDATES are treated differently from INSERT-DELETE and the resulting anomaly is also named differently.

There is also an additional processing cost associated with handling for INSERT-DELETEs, rather than just handling the UPDATES.

Then why not just set the transaction SERIALIZABLE at all times? Well, the answer to the above question is: SERIALIZABLE setting makes transactions very slow, which we again don't want.

In fact transaction time consumption is in the following rate:

So READ_UNCOMMITTED setting is the fastest.

Actually we need to analyze the use case and decide an isolation level so that we optimize the transaction time and also prevent most anomalies.

Note that databases by default may have REPEATABLE_READ setting. Admins and architects may have an affinity towards choosing this setting as default, to exhibit better performance of the platform.

There is a difference in the implementation between these two kinds isolation levels.
For "non-repeatable read", row-locking is needed.
For "phantom read"，scoped-locking is needed, even a table-locking.
We can implement these two levels by using two-phase-locking protocol.

In a system with non-repeatable reads, the result of Transaction A's second query will reflect the update in Transaction B - it will see the new amount.

In a system that allows phantom reads, if Transaction B were to insert a new row with ID = 1, Transaction A will see the new row when the second query is executed; i.e. phantom reads are a special case of non-repeatable read.

The accepted answer indicates most of all that the so-called distinction between the two is actually not significant at all.

If "a row is retrieved twice and the values within the row differ between reads", then they are not the same row (not the same tuple in correct RDB speak) and it is then indeed by definition also the case that "the collection of rows returned by the second query is different from the first".

As to the question "which isolation level should be used", the more your data is of vital importance to someone, somewhere, the more it will be the case that Serializable is your only reasonable option.

There is new issue: we let B notice the modification of A after A committing, it means A modify a value of row which the B is holding, sometime B will read the row again, so B will get new value different with first time we get, we call it Non-repeateable, to deal with the issue, we let the B remember something(cause i don't know what will be remembered yet) when B start.

Let's think about the new solution, we can notice there is new issue as well, cause we let B remember something, so whatever happened in A, the B can't be affected, but if B want to insert some data into table and B check the table to make sure there is no record, but this data has been inserted by A, so maybe occur some error. We call it Phantom-read.

Both non-repeatable reads and phantom reads result from one transaction T1 seeing changes from another transaction T2 that commits before T1 is complete. The difference is that a non-repeatable read returns different values for the same logical row. (For example, if the primary key is employee_id, then a certain employee may have different salaries in the two results.) A phantom read returns two different sets of rows, but for every row that appears in both sets, the column values are the same.

I experimented non-repeatable read and phantom read with MySQL and 2 command prompts.

And, I created "person" table with "id" and "name" as shown below:

First for non-repeatable read, I did these steps below with MySQL queries:

Second for phantom read, I did these steps below with MySQL queries: