How can I make TMUX be active whenever I start a new shell session?

Instead of having to type tmux every time, how could I have tmux always be used for new session windows?

So if I have no terminal windows open and then I open one, how can that first session be in tmux?

warning this can now 'corrupt' (make it unable to open a terminal window - which is not good!) your Ubuntu logins. Use with extreme caution and make sure you have a second admin account on the computer that you can log into in case you have the same problems I did. See my other answer for more details and a different approach.

Given that warning, the simplest solution can be to append the tmux invocation to the end of your .bashrc, e.g.

Note that the exec means that the bash process which starts when you open the terminal is replaced by tmux, so Ctrl-B D (i.e. disconnect from tmux) actually closes the window, instead of returning to the original bash process, which is probably the behaviour you want?

Also, the if statement is required (it detects if the current bash window is in a tmux process already) otherwise each time you start tmux, the contained bash process will attempt to start its own tmux session, leading to an infinite number of nested tmuxen which can be, err, quite annoying (that said, it looks cool).

However, there is a very small risk this can make bash behave in a way that other programs don't expect, since running bash can possibly cause it to turn into a tmux process, so it might be better to modify how you start your terminal emulator.

I use a small executable shell script ~/bin/terminal (with ~/bin in $PATH, so it is found automatically) that looks a bit like:

(I don't use gnome-terminal, so you might have to remove the exec, I'm not sure.)

Now whenever you run the terminal scipt you have a terminal with tmux. You can add this to your menu/desktop/keyboard shortcuts to replace the default terminal.

(This approach also allows you to more easily customise other things about the terminal emulator later, if you ever desire.)

My original, accepted answer, stopped working on my Ubuntu14 system after a recent upgrade.

would stop me from being able to even login. I was only able to resolve this due to having a second admin login on the computer.

The fix for me on Ubuntu (and in osx too) was to change my terminal program to actually run tmux instead, i.e. 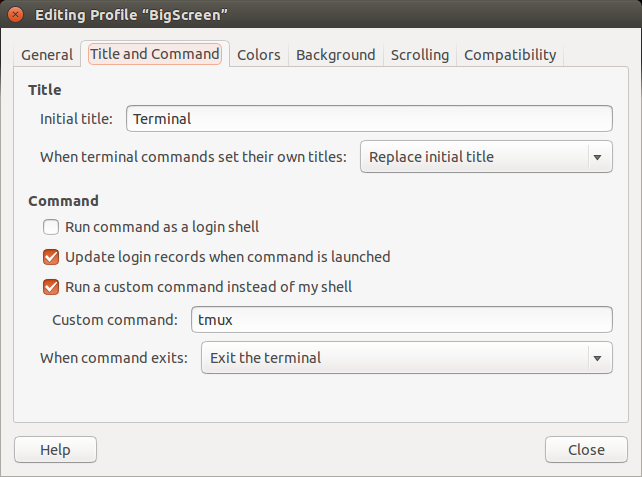 as my last .bashrc line but that his only for my Mac OSX systems now.

If you want to have a single tmux session, put the following in your ~/.bashrc for bash or ~/.zshrc for zsh:

The tmux attach line is to make sure if there is a session it attaches to and if there was no session you will not get the warning about "no session".

For me, I would love my tmux to be started every time I shell onto my remote machine, and when I detach or exit from tmux, the connection should be closed automatically. After digging into this issue for a while, the following code does exactly what I want and is believed to be the most optimized to the best of my knowledge.

Note this line should be the first line in you bashrc file to make sure it is loaded first. We can't put an "exec" call in front of "tmux attach" because after the exec replaces the bash process with the tmux one, the connection will be closed even if there are no sessions to attach to. Therefore we need an "exit" call to terminate the connection after we detach or exit from the attached sessions. But putting an "exec" in front the new-session command is fine as that's the last command to be executed.

Append following line of code to the end of .bashrc,

I just made it a keyboard shortcut (in Linux Mint not Ubuntu; so I'm not sure if it is this easy)... 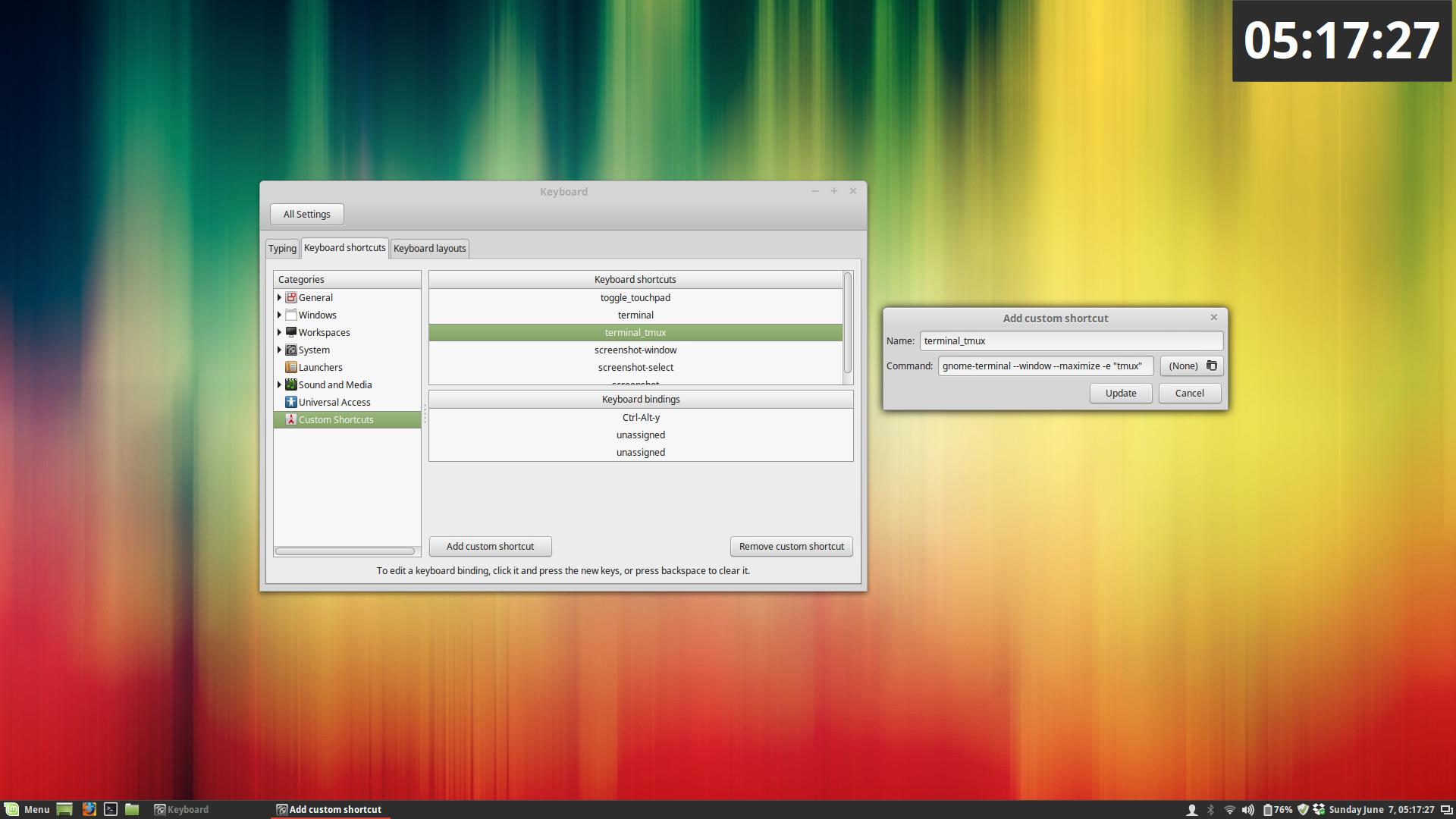 It might be hard to see, but the custom shortcut is gnome-terminal --window --maximize -e tmux. This starts a new gnome-terminal window maximized and then executes tmux for you.

I additionally have another custom shortcut that starts a "normal" gnome-terminal maximized (it's the same without the -e tmux).

I feel this is the best way because you can start whatever terminal whatever way you want and is the most customizable way.

I started with this https://wiki.archlinux.org/index.php/Tmux#Bash and enhanced it to reclaim detached sessions and make new ones if all sessions were already attached

To enable tmux for login and ssh sessions, you can add this to the end of your .bashrc:

This script looks for the parent process of the bash shell. If bash was started from logging in or from ssh, it will execute tmux. If you want this to work with a GUI terminal, you can add that in there as well. For example, if you want to start tmux automatically when you start Ubuntu's standard gnome-terminal, you would use this:

I've tested the above on Live Ubuntu Desktop and I was able to log in afterwards. This should not break the GUI login unless it invokes the login command to log in. I am not aware of a linux GUI that does this.

Within xfce4 (I'm running Fedora 24 XFCE spin, it's great), I've found the simplest solution is to edit panel shortcuts to so they run:

This same command can be used to replace the Keyboard Application Shortcut.

I had previously inserted an if statement into my .bashrc, but it caused login to fail (loop back to the login box whenever a correct password was entered).

A one-liner that also makes sure the terminal type is set correctly for 256 colors:

to your .bashrc. It also works for zsh.

Not the answer you're looking for? Browse other questions tagged shell session terminal tmux or ask your own question.

94
.bashrc/.profile is not loaded on new tmux session (or window) — why?
-1
Shortcut for opening tmux terminal

3769
How can I check if a directory exists in a Bash shell script?
879
Shell command to sum integers, one per line?
1004
How can I declare and use Boolean variables in a shell script?
145
How to create new tmux session if none exists
496
Do sessions really violate RESTfulness?
94
.bashrc/.profile is not loaded on new tmux session (or window) — why?
85
How to automatically start tmux on SSH session?