Jenkins + git: “tell me who you are” error, why does it need to tag?

Just installed Jenkins in Ubuntu 12.04 and I wanted to create a simple build that just clones a project and builds it.

It fails because it cannot tag. It cannot tag because it errors out saying "tell me who you are" apparently because I didn't set git settings UserName and UserEmail.

The idea of tagging when pulling/cloning a repo is common to most Build Scheduler out there:
Hudson-Jenkins, but also CruiseControl (The build label determined by the labelincrementer), or RTC Jazz Build Engine (where they are called "snapshots").

The idea is to set a persistent record of the input to a build.
That way, the code you are pulling, even if it wasn't tagged, is tagged automatically for you by the build scheduler, in order to be able to get back to that specific build later.

If that policy (always tagging before a build) is set, then Jenkins will need to know who you are in order to make a git tag (it is a git object with an author attached to it: user.name and user.email).

However, as mentioned in " Why hudson/jenkins tries to make commit? ":

That should avoid that extra tagging step you appear to not need. 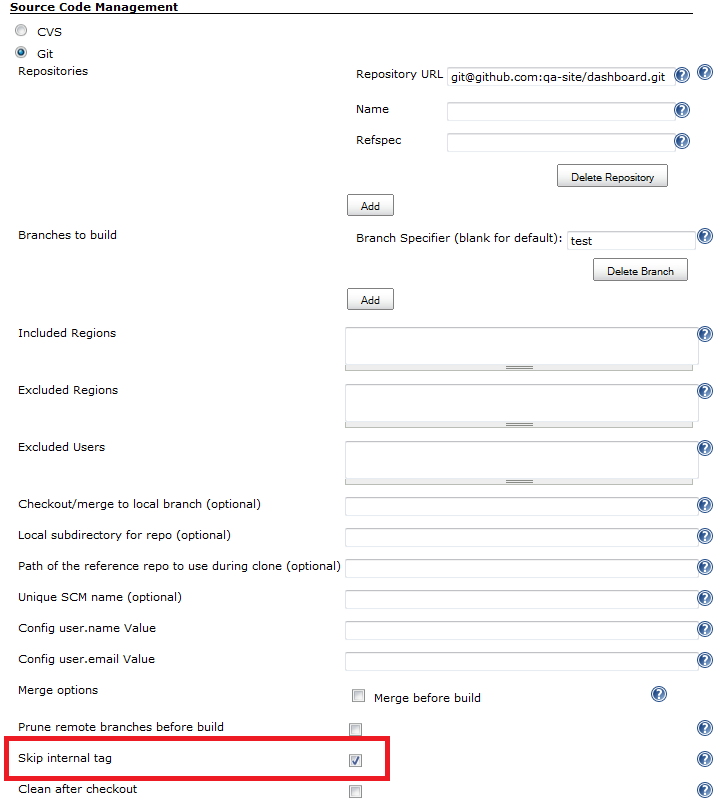 As for how to set user.email and user.name, In jenkins, go to "Manage Jenkins" > "Configure System" and scroll down to "Git plugin" and there you will find

enter your email and name, you're good to go.

I used the solution above by iecanfly . Using my git user name and password didnt work , I entered

That fixed the issue.

You can also SSH into Jenkins and navigate over to the workspace directory, and then you can just run the git config user.name and user.email commands normally.

If you are running Jenkins in a Docker container, you'd need to exec into the container docker exec -it <CONTAINER_ID> sh then run the suggested git commands with your email and name.

Not the answer you're looking for? Browse other questions tagged git jenkins jenkins-plugins or ask your own question.