What are optimal scrypt work factors?

I'm using a Java scrypt library for password storage. It calls for an N, r and p value when I encrypt things, which its documentation refers to as "CPU cost", "memory cost" and "parallelization cost" parameters. Only problem is, I don't actually know what they specifically mean, or what good values would be for them; perhaps they correspond somehow to the -t, -m and -M switches on Colin Percival's original app?

cpercival mentioned in his slides from 2009 something around

These values happen to be good enough for general use (password-db for some WebApp) even today (2012-09). Of course, specifics depend on the application.

r and p are meant to accommodate for the potential issue that CPU speed and memory size and bandwidth do not increase as anticipated. Should CPU performance increase faster, you increase p, should instead a breakthrough in memory technology provide an order of magnitude improvement, you increase r. And N is there to keep up with the general doubling of performance per some timespan.

Important: All values change the result. (Updated:) This is the reason why all scrypt parameters are stored in the result string.

So that it takes 250 ms to verify a password

The memory required for scrypt to operate is calculated as:

You have to take this into account when choosing parameters.

Bcrypt is "weaker" than Scrypt (although still three orders of magnitude stronger than PBKDF2) because it only requires 4 KB of memory. You want to make it difficult to parallelize cracking in hardware. For example, if a video card has 1.5 GB of on-board memory and you tuned scrypt to consume 1 GB of memory:

then an attacker could not parallelize it on their video card. But then your application/phone/server would need to use 1 GB of RAM every time they calculated a password.

It helps me to think about the scrypt parameters as a rectangle. Where: 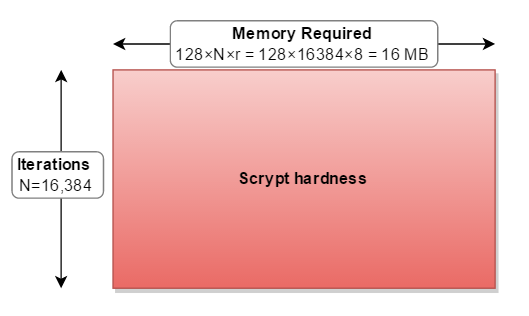 The remaining parameter parallelization (p) means that you have to do the entire thing 2, 3, or more times:

If you had more memory than CPU, you could calculate the three separate paths in parallel - requiring triple the memory:

But in all real-world implementations, it is calculated in series, tripling the calculations needed: 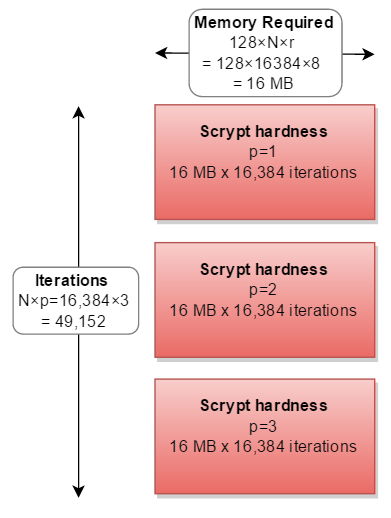 In reality, nobody has ever chosen a p factor other than p=1.

What are the ideal factors?

Graphical version of above; you're targeting ~250ms: 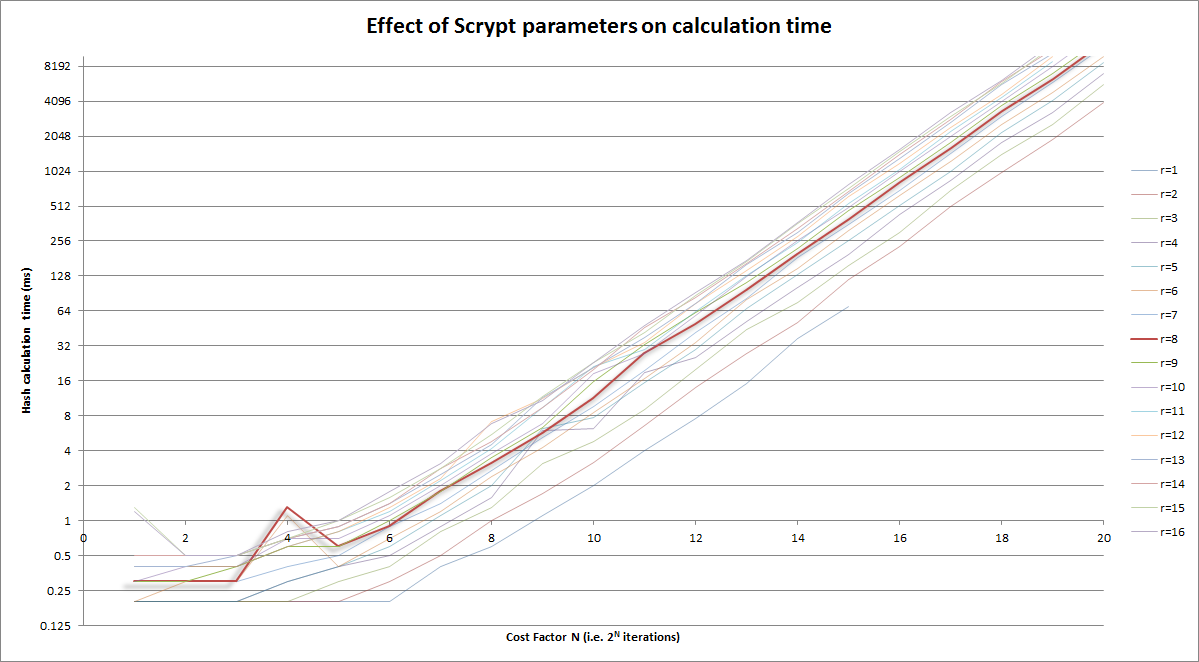 And zoomed in version of above to the reasonable area, again looking at the ~250ms magnitude: 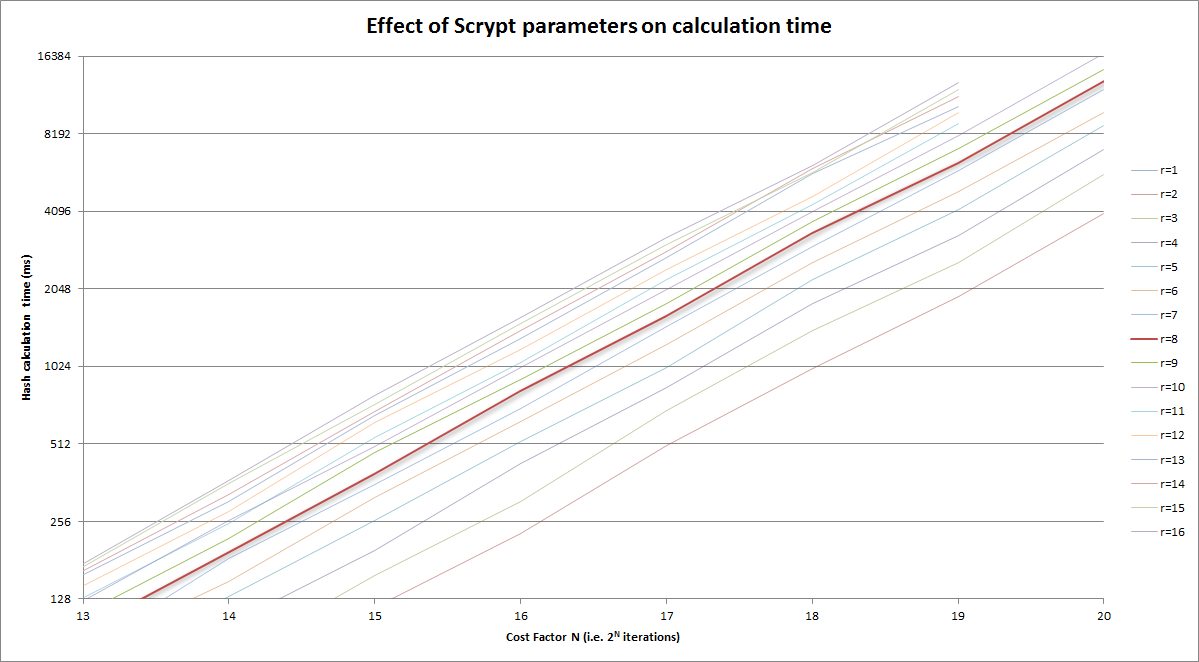 I don't want to step on the excellent answers provided above, but no one really talks about why "r" has the value it has. The low-level answer provided by the Colin Percival's Scrypt paper is that it relates to the "memory latency-bandwidth product". But what does that actually mean?

If you're doing Scrypt right, you should have a large memory block which is mostly sitting in main memory. Main memory takes time to pull from. When an iteration of the block-jumping loop first selects an element from the large block to mix into the working buffer, it has to wait on the order of 100 ns for the first chunk of data to arrive. Then it has to request another, and wait for it to arrive.

This isn't good, because it means that an attacker could get an advantage over you by building a system with reduced latency to main memory.

But if you increase r and proportionally decrease N, you are able to achieve the same memory requirements and do the same number of computations as before--except that you've traded some random accesses for sequential accesses. Extending sequential access allows either the CPU or the library to prefetch the next required blocks of data efficiently. While the initial latency is still there, the reduced or eliminated latency for the later blocks averages the initial latency out to a minimal level. Thus, an attacker would gain little from improving their memory technology over yours.

However, there is a point of diminishing returns with increasing r, and that is related to the "memory latency-bandwidth product" referred to before. What this product indicates is how many bytes of data can be in transit from main memory to the processor at any given time. It's the same idea as a highway--if it takes 10 minutes to travel from point A to point B (latency), and the road delivers 10 cars/minute to point B from point A (bandwidth), the roadway between points A and B contains 100 cars. So, the optimal r relates to how many 64-byte chunks of data you can request at once, in order to cover up the latency of that initial request.

This improves the speed of the algorithm, allowing you to either increase N for more memory and computations or to increase p for more computations, as desired.

There are some other issues with increasing "r" too much, which I haven't seen discussed much:

To sum up all the recommendations:

Not the answer you're looking for? Browse other questions tagged java cryptography scrypt or ask your own question.

2420
What is reflection and why is it useful?
4144
What are the differences between a HashMap and a Hashtable in Java?
1648
How does the Java 'for each' loop work?
3490
What is the difference between public, protected, package-private and private in Java?
3287
What is a serialVersionUID and why should I use it?
1198
What are the possible values of the Hibernate hbm2ddl.auto configuration and what do they do
2161
What is a JavaBean exactly?
1525
What exactly is Apache Camel?
1308
What are the -Xms and -Xmx parameters when starting JVM?
1721
What does "Could not find or load main class" mean?